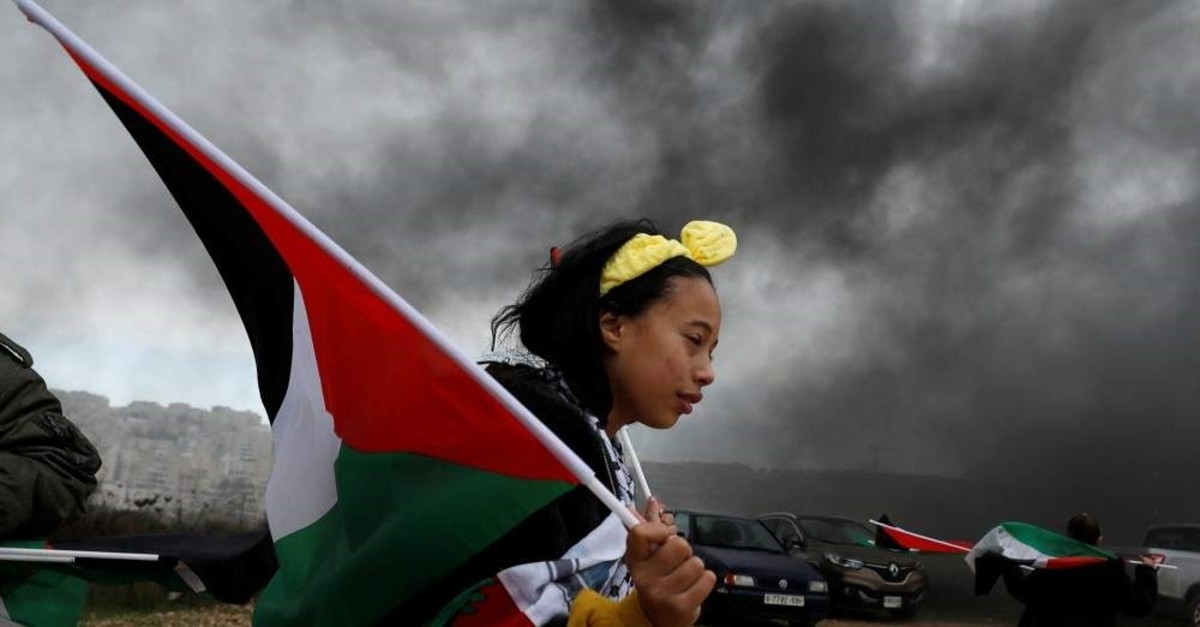 A girl holds a Palestinian flag during a protest against U.S. President Donald Trump's Middle East peace plan, in the village of Bilin in the Israeli-occupied West Bank, Feb. 7, 2020. (REUTERS Photo)
by Compiled from Wire Services Feb 07, 2020 5:26 pm

Israeli forces shot dead a Palestinian during clashes in the occupied West Bank on Friday, the Palestinian health ministry said, amid a deadly uptick in violence.
Badr Nafla, 19, died after being shot by Israeli forces in the neck during clashes near the northern West Bank city of Tulkarem, the ministry said.
The Israeli army had no immediate comment.
Dozens of Palestinians in the occupied West Bank were injured and suffocated when the Israeli army fired live and rubber bullets and tear gas canisters.

Murad Shtaiwi, coordinator of the Popular Resistance Committees in the town of Kafr Qaddum, Qalqilya, said that three Palestinians were injured by rubber bullets and dozens were exposed to the tear gas. Shtaiwi added that the Israeli forces arrested a Palestinian during the clashes.

Separate clashes broke out in the West Bank on Friday amid tensions in the occupied territory after U.S. President Donald Trump's recent announcement of the so-called peace plan to end the Israeli-Palestinian conflict, one of the world's longest-running disputes. What Trump calls the "Deal of the Century" refers to Jerusalem as "Israel's undivided capital" and recognizes Israeli sovereignty over large parts of the West Bank. The plan drew widespread criticism from Palestinians and the Arab world. It was rejected by the Organization of Islamic Cooperation (OIC). The OIC urged "all member states not to engage with this plan or to cooperate with the U.S. administration in implementing it in any form."