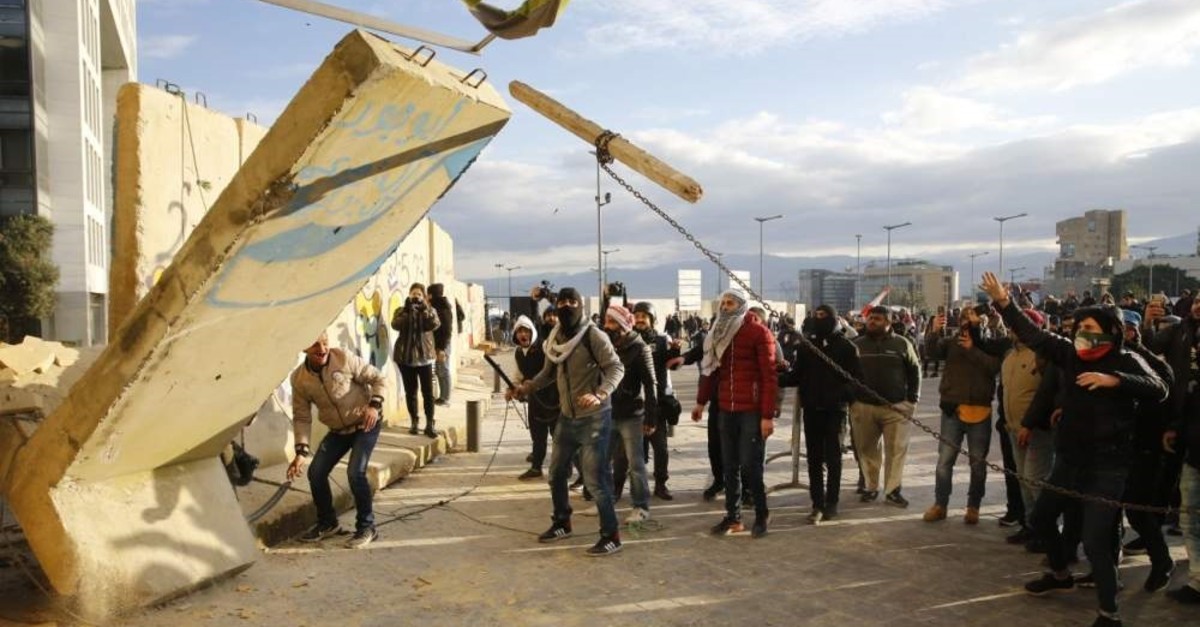 Protesters remove a concrete block from a wall, installed by the authorities, to open a road that links to the parliament building, Beirut, Feb. 11, 2020. (AP Photo)
by Compiled from Wire Services Feb 11, 2020 12:02 pm

Hundreds of Lebanese anti-government protesters vowed Tuesday to stop lawmakers from reaching parliament to cast a vote of confidence in the new cabinet amid a crippling economic and financial crisis, the country’s worst in decades.

Clashes broke out between Lebanese protesters and security forces near the parliament building in central Beirut. Demonstrators managed to remove one of the large cement blocks in the area, which prompted anti-riot police to confront them with tear gas and water cannon. More than 200 people were wounded in clashes between Lebanese anti-government protesters, army personnel and Internal Security Forces in various locations in central Beirut,

Police threw a tight security dragnet around the area, and special forces and riot policemen quickly opened roads that were closed by protesters trying to prevent Cabinet ministers and legislators from reaching parliament. They carried placards reading "No Confidence," putting their rejection of Prime Minister Hassan Diab and his 20-member cabinet on full display.

Lebanon has been gripped by anti-government protests since October. Demonstrators are calling for sweeping reforms and an end to a political class they deem as corrupt and incompetent, blaming it for the rapidly worsening financial crisis. The protests forced the resignation of the former prime minister, Saad Hariri.

On Jan. 21, Diab formed a new 20-member government that aims to tackle the worst economic crisis in the country since the civil war 1975-1990. Some protesters have rejected a new cabinet and accuse the political elite of ignoring demands that include an independent government and fighting corruption. The protesters have been demonstrating for more than three months against the ruling elite that has run the country since the end of the 1975-1990 civil war.

The protesters have rejected Diab because he was supported by the Iran-backed Hezbollah movement and its main ally President Michel Aoun. New Prime Minister Hassan Diab is expected to read the new government's policy statement, which includes a rescue plan to try to get Lebanon out of its economic and financial crisis.

According to a copy of the government policy statement published by local media, it includes an "emergency rescue plan" and reforms in the judicial, financial and administrative fields, as well as fighting corruption and fixing the country's finances.

Lebanon has one of the highest debt ratios in the world, at more than 150% of GDP – and worsening over the past years with little to no economic growth and soaring unemployment. The political impasse is worsening an already-dire economic crisis that the World Bank says may see the number of people living in poverty climb from a third to half the population.