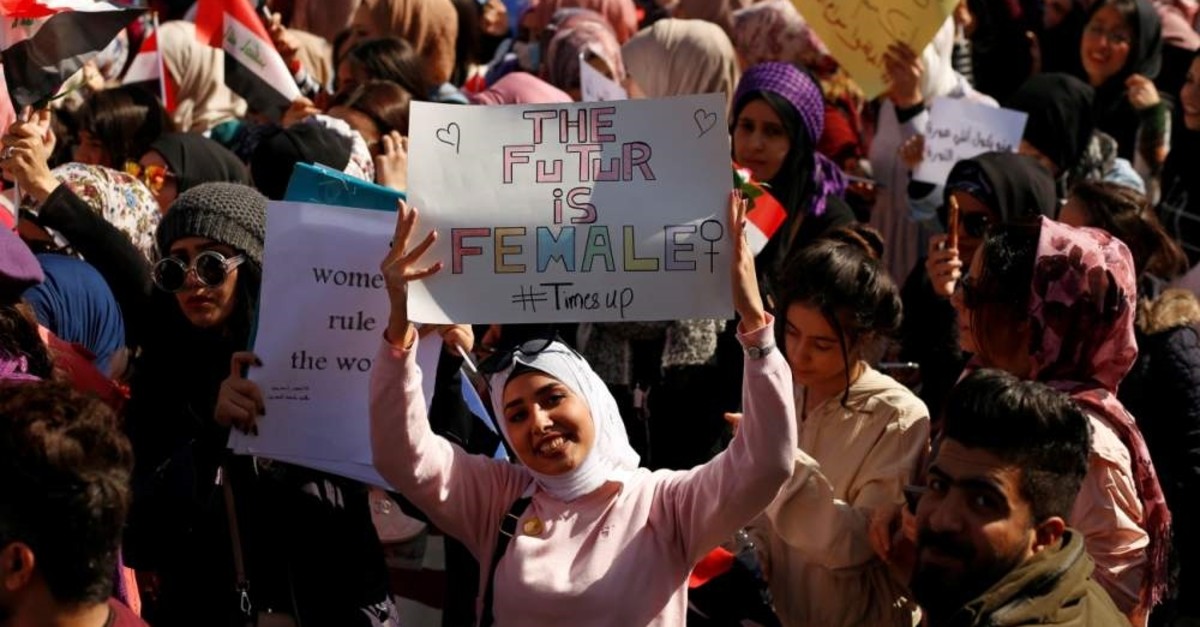 Hundreds of Iraqi women of all ages flooded central Baghdad Thursday alongside male anti-government protesters, defying an order by powerful cleric Moqtada al-Sadr to separate the genders at rallies. Most carried roses, Iraqi flags or signs defending their role in the regime change demonstrations. Men linked arms to form a protective ring around the women as they marched for over an hour. They were seen holding hands in Tahrir and even camping out in the square together.

They marched through a tunnel and spilled out into Tahrir Square, the epicenter of the youth-dominated movement in a country where vast regions remain socially conservative. "We want to protect women's role in the protests as we're just like the men. There are efforts to kick us out of Tahrir but we'll only come back stronger," said Zainab Ahmad, a pharmacy student, as reported by Agence France-Presse (AFP). "Some people were inciting against us a few days ago, seeking to keep women at home or keep them quiet. But we turned out today in large numbers to prove to those people that their efforts will end in failure," she said.

On Saturday, al-Sadr had alleged drug and alcohol use among the protesters and said it was immoral for men and women to mix there. And a few moments before Thursday's women's march began, he once again took to Twitter to slam the protests as being rife with "nudity, promiscuity, drunkenness, immorality, debauchery... and non-believers." He also said Iraq must not "turn into Chicago," which he said was full of "moral looseness," including homosexuality, a claim that was mocked online.

Al-Sadr initially threw his weight behind the anti-government uprising but recently repositioned himself toward the political establishment after political elites selected Mohammed Allawi as prime minister-designate, a candidate he endorsed. Since then, al-Sadr issued a dizzying array of calls to followers, asking them to return to the streets days after withdrawing support from protests. The often contradictory orders have exacerbated existing tensions between anti-government demonstrators and his followers, with some activists claiming al-Sadr's followers had threatened them to follow the cleric's line or leave protest sites.

Anti-government protesters who took to the streets on Oct. 1 in Baghdad and southern Iraq to decry rampant government corruption, poor services and unemployment have rejected Allawi's candidacy. At least 500 have died under fire from security forces in the movement, now in its fifth month.