Netanyahu plans direct flights to Mecca ahead of elections 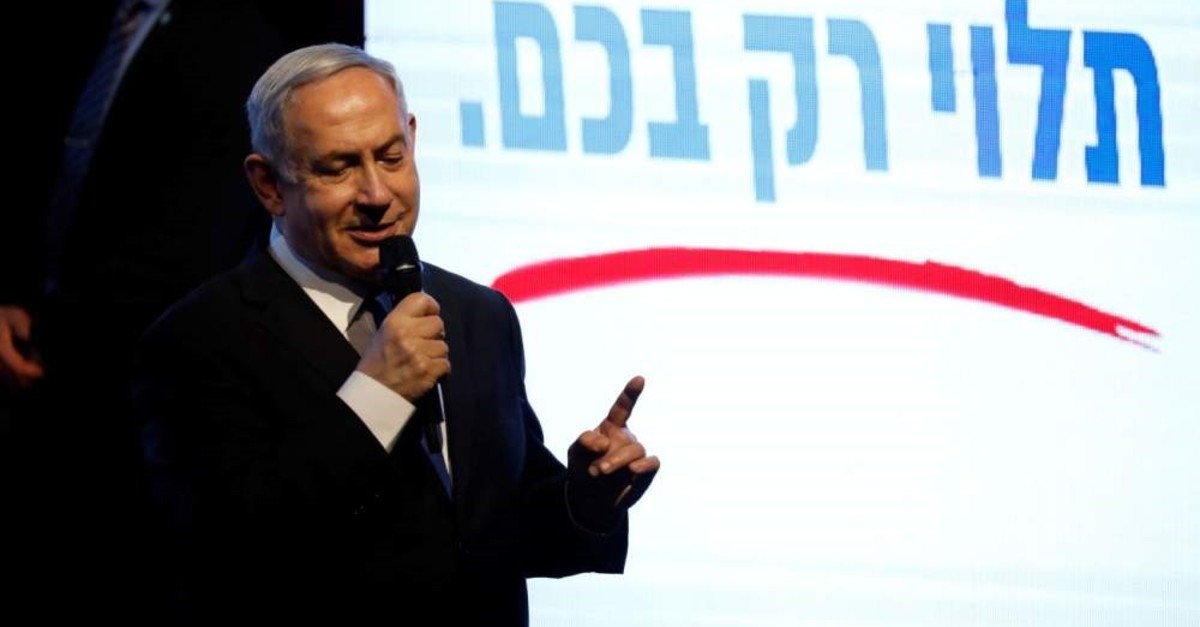 Israeli Prime Minister Benjamin Netanyahu speaks to supporters at a Likud party rally as he campaigns ahead of the upcoming elections, Tel Aviv, Feb. 18, 2020. (REUTERS Photo)
by Daily Sabah with Agencies Feb 20, 2020 2:02 pm

Two weeks before the upcoming election in Israel, Prime Minister Benjamin Netanyahu promised to implement direct flights from Tel Aviv to Mecca, in Saudi Arabia, in a Facebook post which was deleted moments after going live online. Written in both Arabic and Hebrew, Netanyahu said, “We are working to introduce direct flights from Tel Aviv to Mecca for the benefit of Muslim pilgrims who intend to perform the Hajj,” according to a report by Maariv.

His move was seen as a way to win votes from the Arabs ahead of the elections. Israel is home to 9 million people, one in five of whom is Arab, including Muslims, Christians and Druze. They have long complained of being treated as second-class citizens.

Arab-Muslim Israeli politician and leader of the Arab Movement for Change slammed Netanyahu, describing the Facebook post as a “Bibi-lie.” “Is there anything more pitiful than Netanyahu attempting to win Arab votes by the lie of helping pilgrims?” he asked, as reported by the Jerusalem Post.

Israel will hold elections on March 2, the third vote in less than a year. Like the previous elections in April and September, the upcoming vote is seen largely as a personal referendum on Netanyahu. The previous elections ended in deadlock, with both Netanyahu’s Likud Party and the rival Blue and White, led by former military chief Benny Gantz, unable to secure parliamentary majorities. Opinion polls have predicted a similar outcome in the third. In addition, his criminal trial which will begin March 17 has shaken up the final stretch of a contentious election campaign and hurt the longtime Israeli leader’s hopes of forming a new government after the vote.

Last month, Israel officially gave its citizens the right to travel to Saudi Arabia for religious and business visits, in the latest sign of warming ties between the two states. The interior ministry's announcement will have limited practical impact, as Israelis had previously been traveling to Saudi Arabia via third countries, especially Jordan. But Israel had never granted official approval for such travel by both Jewish and Muslim Israelis. There was no indication of a corresponding policy change from the Saudi side, but there have in recent months been gestures pointing to warming ties between Israel and Gulf states.

Similar to the U.S., Netanyahu has launched an initiative to develop positive relations with Gulf countries, especially with Saudi Arabia, as Crown Prince Mohammed bin Salman is known for his soft stance toward Israel. Common concerns over Iran are widely seen as having fostered incipient ties between Israel and several Arab states, especially in the Gulf. Saudi Arabia believes Iran funds certain groups in Yemen as well as in Syria and Iraq, while Israel claims Iran and its proxies or supporting groups, like Hezbollah, are existential threats to its soil. They agree that Iran must be stopped, and its power must be curbed at any price.