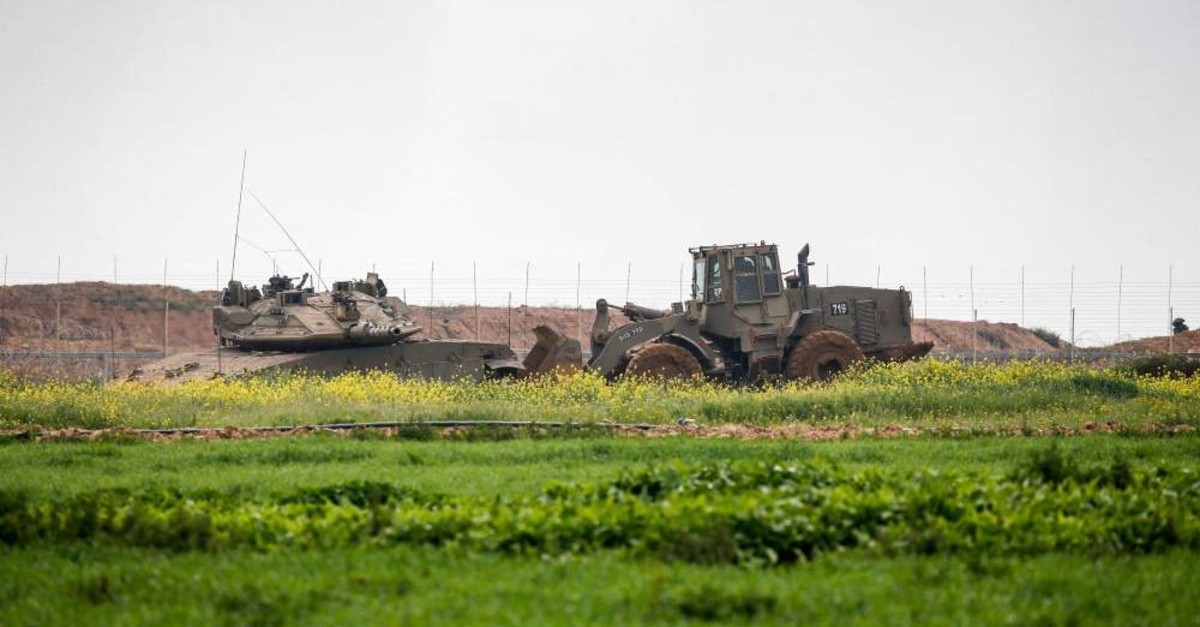 An Israeli Merkava battle tank and an earth mover along the Israel-Gaza border east of Khan Yunis in the southern Gaza Strip, Feb. 23, 2020. (AFP Photo)
by Compiled from Wire Services Feb 23, 2020 3:24 pm

Israeli forces on Sunday shot dead a Palestinian suspected of placing explosives near the Gaza border, before extracting his body with a bulldozer, the Israeli military said.

Two Palestinians were injured by Israeli gunfire on Sunday near the border of the Gaza Strip, according to the Palestinian health ministry. In a statement, the Israeli army said it fired at two Palestinians allegedly planting an explosive device next to Gaza's security fence.

"The troops opened fire toward them. A hit was identified," Israeli military statement said.

Following the incident, a video from Gaza emerged showing a bulldozer approaching the body as young, apparently unarmed men were trying to collect it.

The sound of gunfire is heard, and the men ultimately run away as the bulldozer collects the body. A tank can be seen positioned nearby.

The incident comes amid a relative lull along the security fence separating Israel from Gaza. Last week, Israel announced it would provide hundreds of additional work permits for Palestinians in the Gaza Strip, in a new step aimed at solidifying an informal cease-fire with the Hamas.

Tens of thousands of Gazans used to work in Israel. But Israel virtually sealed the border when it joined Egypt in imposing a crippling blockade on Gaza after Hamas seized power from rival Palestinian forces in 2007. The blockade, along with three wars between Hamas and Israel, has devastated the economy in Gaza, where unemployment is over 50%.