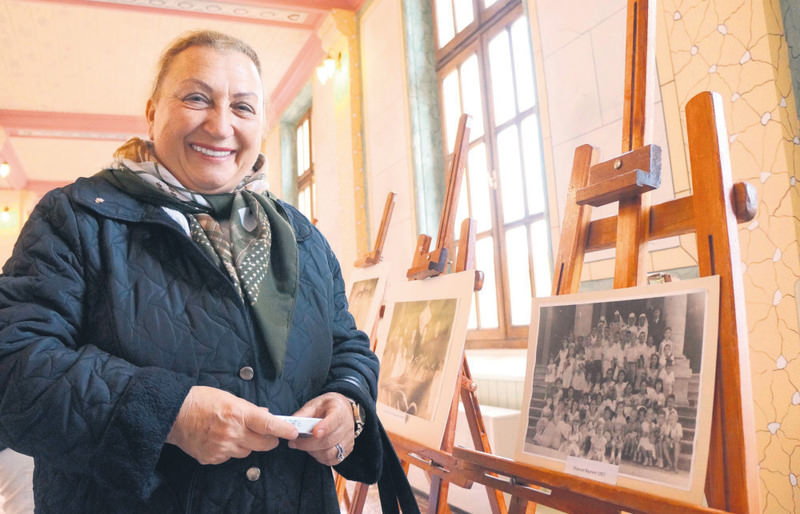 by Anadolu Agency Apr 26, 2015 12:00 am
The Great Synagogue of Edirne, which was reopened last month after a four-year restoration project costing TL 4 million ($1.47 million), is attracting visitors from far and wide with one visitor finding her parents' wedding photo taken early last century.

The synagogue, which is especially busy on the weekends, is attracting visitors from Istanbul and other nearby cities along with tourists from Russia and the U.S. The synagogue also houses an exhibition featuring photos from when the house of worship was frequently used by the local Jewish community in the early 20th century.

Sara Sarfeti, who was born in Edirne but moved to Istanbul in her 20s, found her parents' wedding photo among the pieces in the exhibition. "I was amazed and excited. No one in my family has that photo. There was another photo of my relatives, too. I will take photos of it and archive it."

Barbara Hasson Baron, who came to Edirne from the U.S. to visit the lands where her father, Albert J. Hasson, was born, said she was glad to have made the trip.

The synagogue is serving as both a museum and as a house of worship as part of Turkey's latest efforts to win back the hearts and minds of minorities who have long suffered from suppressive policies in the past. The Great Synagogue of Edirne was built in 1905 upon an order by Sultan Abdülhamid II to replace 13 separate synagogues which were destroyed by a huge fire that devastated the city. The building was designed by French architect France Depre and opened in 1907 to serve as a house of worship until 1983, by which time the city's Jewish community had dwindled to almost nothing. The building was later transferred to Edirne's Trakya University for cultural use, but due to criticism, it was handed over to the General Directorate of Foundations in 1995 and the synagogue's roof collapsed two years later. The synagogue, also known as Kal Kadosh ha Gadol, features the architectural characteristics of the Leopoldstadter Tempel, once the largest synagogue in Vienna. Edirne is believed to be the birthplace of the Maftirim repertoire, a mystic Sephardic Jewish music.
Last Update: Apr 26, 2015 9:43 pm
RELATED TOPICS