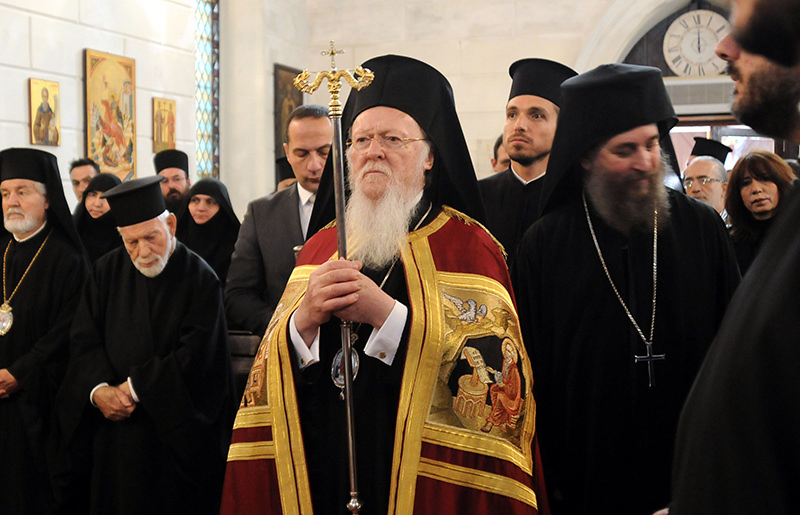 Fener Greek Orthodox Patriarch Bartholomew I expressed the Greek Orthodox community’s gratitude to the government for allowing them to hold a service in an ancient church, which he called ‘a sign of religious freedoms in Turkey’

Bartholomew I, the Istanbul-based Fener Greek Orthodox Patriarch, extolled religious freedoms in Turkey and thanked local authorities and the government for permission to hold the Divine Liturgy in an ancient church in western Turkey.

The patriarch was in İzmir's Selçuk district, along with priests and the faithful from Greece and Russia, to preside over religious services at the Meryem Ana Church, a historic Byzantine structure in Ephesus where Mary is believed to have spent her final years with St. John before its conversion to a church.

Speaking to reporters, the patriarch said, "We are glad to live here [in Turkey] and thank God for it. I would like to sincerely thank everyone from the Selçuk mayor to the Culture and Tourism Minister for helping us to have an opportunity to hold the Divine Liturgy here. We wouldn't be here if the authorities did not allow. This is a sign of religious freedom."

Bartholomew I said the church was of historic significance for them, as Ephesus was also the place where The Council of Ephesus, a convention of Christian bishops, was held in 431 A.D. "The lands of Anatolia are sacred for many religions and it lies in an intersection of civilizations. We are happy to live here and are grateful to God," the patriarch added.

Turkey, a secular country, has a Muslim-majority population. State policy for decades discriminated against non-Muslim communities, including Jews, Greek and Armenians. Properties of religious communities were forcibly seized and many were forced to leave the country due to repressive policies. The Justice and Development Party (AK Party) government, in power since 2002, moved to restore their rights as part of democratization reforms. Properties are being returned to religious communities and the government removed restrictions on work permits for non-Turkish staff of the Fener Greek Orthodox Patriarchate.

Bartholomew I, who has served as the Greek Orthodox patriarch since 1991, frequently expresses support for the current government's policies toward religious minorities. He had said in another visit to İzmir when observing a Divine Liturgy in February that the problems of minorities have declined considerably in recent years thanks to the government's approach. The patriarch has praised a boost in interfaith dialogue with the Greek Orthodox, Muslims, Jews and other Christian communities. "As a matter of fact, we do not have major problems anymore. We are happy with Turkey's current stance on minorities," he had said in February.