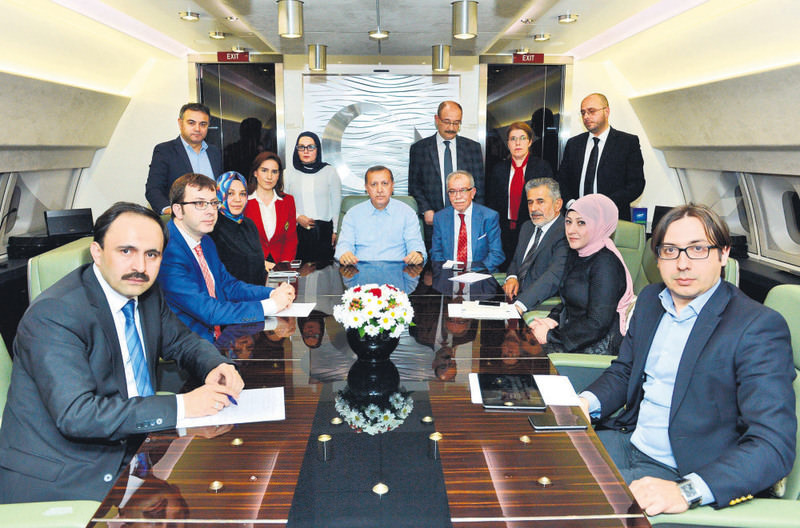 Prisedent Erdou011fan (center) on the Presidential Plane, speaking to journalists, including Daily Sabah Editor-in-Chief Serdar Karagu00f6z (first on right), on his return flight from Europe.
by Serdar Karagöz May 11, 2015 12:00 am

President Recep Tayyip Erdoğan, speaking on his way back from a one-day tour of Germany and Belgium where he addressed citizens of Turkey living in Europe, said Ankara is determined in its efforts to protect Turkmens living in Bayırbucak, north of Latakia, adding that no one should expect Turkey to stand on the sidelines at a time when bombs are raining down on Turkmens. Speaking to journalists accompanying him, the president dismissed claims insinuating that the National Intelligence Organization (MİT) is sending weapons to al-Qaida. "Such lies against our intelligence agency are unacceptable. Those who make such claims have the obligation to prove them. At a time when Turkmens in Bayırbucak are under attack, it is unthinkable for Turkey to do nothing," he said.

The president further added that, "In this respect, the MİT has done its duty and certain groups tried to prevent it."

Prosecutors and gendarmerie officials linked to the Gülen Movement in the Mediterranean province of Adana last year launched an illegal operation against MİT trucks carrying aid to Syria under the guise that they were carrying weapons. Those responsible for the operation currently face prosecution.

Turkey currently cooperates with Saudi Arabia and Qatar as part of the training and equipping of moderate Syrian opposition groups, just like other countries such as the U.S., were doing, he said.

Speaking to journalists accompanying him on the tour, Erdoğan underlined that the strategy vis-a-vis Syria was being followed by Turkey for the past few years. "We told the U.S. our priorities: A no-fly zone, a security zone and a train-and-equip program. The train-and-equip plan is proceeding in cooperation with the U.S. Saudi Arabia and Qatar also share our stance in this regard. However, the timetable of the process will become apparent in the next few months."

Turkey's priority is its own national security, said the president, arguing that the recent advances registered by the Syrian opposition were directly correlated with the improvement in the assistance they were receiving. "If this help ceases, the opposition's momentum will suffer. We need to secure ourselves as a country that shares a long border with Syria. We have taken the necessary measures."

Erdoğan also underlined the threat posed by the controversial Gülen Movement, which he noted that the National Security Council (MGK) had described as an "illegal terrorist organization under the guise of legality," and added that the Red Book, which lists national security threats, would soon be updated in this respect. "There are both armed and unarmed terrorist groups. Unarmed terrorist groups have their own peculiar strategies and tactics. The government is in the process of formulating its response to the threat posed by the group. You can see its judicial repercussions. Soon, you may see it spread to other parts."

Erdoğan also said that he was aware of the current Prime Minister Ahmet Davutoğlu visiting Fethullah Gülen, the shadowy leader of the Gülen Movement, currently living in Pennsylvania, in 2013 as the foreign minister. "He received my permission to do so. I don't know about their dialog with [former] President Abdullah Gül but I, as the then-prime minister, was the one from whom he had to get permission. After a while I became suspicious and started to reject applications to visit Pennsylvania. Once he returned we discussed what happened with Davutoğlu. I can't divulge the details of the discussion but as I said, the visit was within my knowledge."

When asked about the funeral arrangements for the September 12, 1980 coup leader Kenan Evren, who died over the weekend, Erdoğan replied that the funeral ceremonies for former presidents were regulated according to certain protocol rules. Evren's family wanted for him to be buried at the state cemetery in Ankara, said Erdoğan, adding, "I personally have no intention to attend the funeral but an official will represent the Presidency."

When asked about his views on the state of the economy, which has become one of the main campaigning themes as the June 7 parliamentary elections approach, the president was adamant that claims about the economy stagnating were untrue. "There are certain facts present. Recently, the industrial production growth was recorded as 4.6 percent. This means the industry is growing."

There are signs that post-election economic growth will pick up even further, assured the president, emphasizing figures that show exports will increase in the next few months.

"If a government that fosters stability and trust is established, Turkey will attract serious foreign investment," the president argued, adding that his speeches in Germany and Belgium focused on the examples of Italy and Belgium. "Why? Because both seriously suffered from their failure to form a government. It took one Belgium government 157 days and the other 500 days to form a cabinet after the general elections. If it takes so long to form a coalition government, can there be stability there? No. What did Italy do as a result? It changed the law to ensure any party that passes 40 percent support forms the government. If no party passes that figure, a second round of elections take place between the top two." He also pointed to the single-member constituency system in the U.K., where a party that received 12 percent of the votes could manage to get only one deputy in Parliament while another with 4.7 percent support received 56 deputies.

His objective was to introduce more representatives in Parliament. He said he had proposed three alternatives to the opposition. "One was to introduce narrower constituencies with a 5 percent election threshold. The other was very narrow constituencies without any threshold. The last was to continue with the present system. In Trabzon or Ordu, 100,000 elect a single deputy while the figures are much lower in Tunceli or Bingöl. This is not just. However, the opposition felt none of the options were in their interest. Opposition parties fail to provide policies that attract nationwide interest. If they had to fight for every vote in a narrow constituency system, most would not be able to get elected." The president also described the resignation of three opposition leaders in the U.K. just hours after the election results were announced as a lesson for Turkey.

The president accused the pro-Kurdish Peoples' Democratic Party (HDP) of trying to deceive Kurdish citizens, adding that the party leaders were openly talking about banning religion classes at schools and describing Istanbul's Taksim Square as something akin to the Kaaba.

The government is continuing its projects to boost the economic growth of southeast and east, noted the president, citing the Selahaddin Eyyübi Airport being built in Yüksekova, which was supposed to opened two years ago but was constantly delayed due to attacks by the terrorist PKK.

The ruling Justice and Development Party (AK Party) government's policy to reverse the previous policy of coercion and pressure was paying dividends in the region in terms of improved health, education services and better prospects in terms of energy and justice.

He said he felt sure the June 7 elections would proceed in a peaceful atmosphere with the Interior Ministry and the Gendarmerie Command taking the necessary precautions. "I feel confident that the participation rate will be a record for the Republican era," Erdoğan said.

On the topic of the reconciliation process, Erdoğan said he is certain the government is sincere in its effort to continue the process, while the opposition remained aloof and distant. "The HDP is trying to provoke and never was supportive. If they had been otherwise, they would have never put up posters in Van province depicting taps with running blood.

NO TIES WITH ISRAEL WITH EMBARGO

Turkey's stance on relations with Israel remained the same since the 2010 Mavi Marmara attack, argued Erdoğan, adding that Turkey was willing to re-establish ties once the embargo on the Gaza Strip was lifted, an apology was issued and compensation paid to Turkish victims of the attack. "There was progress on the apology matter, but nothing was done on the other two prerequisites to re-establishing ties."

He described Gaza as an open air prison where even a case of tomatoes need to be approved by Israel for it to enter the strip. "They promised us to lift the restrictions but never did. Once they do, we will normalize ties," Erdoğan said.
Last Update: May 12, 2015 10:13 am
RELATED TOPICS