Orphanage handed back to Armenians after protests 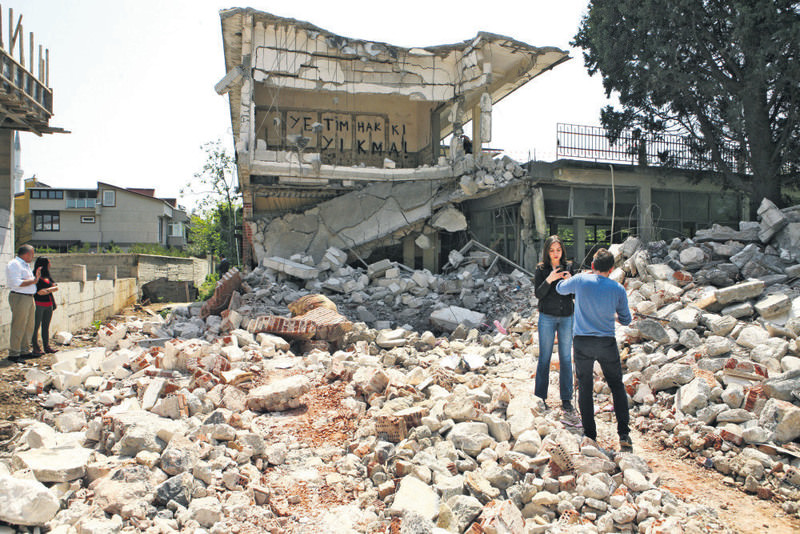 The orphanage, partially demolished, remains largely in ruins as the building was vacant for decades.
by Daily Sabah with Wires May 24, 2015 12:00 am

Camp Armen, a historic orphanage for Armenian children in Istanbul's Tuzla district, may see its glory days again after the property's owner, Fatih Ulusoy, announced he would donate it to the Armenian community.

The site, which has remained in ruins for years, was planned to be demolished by its current owner before activists, mostly from the Armenian community, rushed to stop the demolition earlier this month. The group camped out at the site for days, blocking bulldozers and later took to the streets for a rally against the destruction of the place that once housed orphaned Armenian children from all over Turkey.

Ulusoy issued a written statement announcing he has decided to donate the place to the Gedikpaşa Armenian Protestant Church Foundation that built the orphanage in 1962. Ulusoy said Prime Minister Ahmet Davutoğlu had asked Istanbul Mayor Kadir Topbaş to help resolve the dispute, and he decided to donate it "to contribute to social peace and unity at a time of speculations over the 1915 incidents." He was referring to the Armenian campaign to force Turkey to recognize the mass deaths of Armenians in the Ottoman Empire during World War I as genocide. Ulusoy said he was unaware that the orphanage was seized by the state in a controversial legal process when he bought it nine years ago.

Activists welcomed Ulusoy's decision to halt the demolition and donate the land. Alexis Kalk, spokesman for Nor Zartonk (New Renaissance), an Armenian nongovernmental organization (NGO) whose members staged the sit-in strike for 18 days at the orphanage, announced the decision to the applause of activists. Kalk said they would continue their "struggle" until the formal process for the donation of the title deed to the foundation is completed. Kalk said the orphanage was not the only Armenian property seized by the state in the past and there were hundreds of others awaiting return to the Armenian community. He called on the government to draft a return policy for these properties and not to leave it to legal processes between current owners and the Armenian community.

Speaking to Anadolu Agency, Kalk said they were pleased that the matter was resolved "with the will of the government" and was not dragged down "despite it being a pre-election period," referring to the upcoming general elections on June 7. He said Camp Armen would be restored and will likely be used as a center focused on children's activities.

Camp Armen was confiscated after the Turkish Supreme Court of Appeals ruled in 1974 that foundations set up by those who are not Turkish cannot acquire properties, based on a controversial 1936 regulation that paved the way for the seizure of properties from non-Muslim communities. The title deed for the orphanage, where more than 1,500 Armenians spent their childhood before its closure, was canceled in 1979. It was returned to its former owner and changed hands several times since then. Among the orphans raised in the historic building was the late Hrant Dink, editor-in-chief of the Agos daily and a renowned figure from the Turkish-Armenian community who was assassinated in 2007. His wife Rakel Dink also spent time there.

Since 2011, in the wake of a landmark government decree paving the way for the return of properties seized from non-Muslim minorities, several historic buildings in Istanbul and other cities were returned to minority communities, including Armenians. Minority community foundations have been granted the return of properties forcibly confiscated by the state in the past under discriminatory policies through lawsuits.
Last Update: May 24, 2015 8:39 pm
RELATED TOPICS