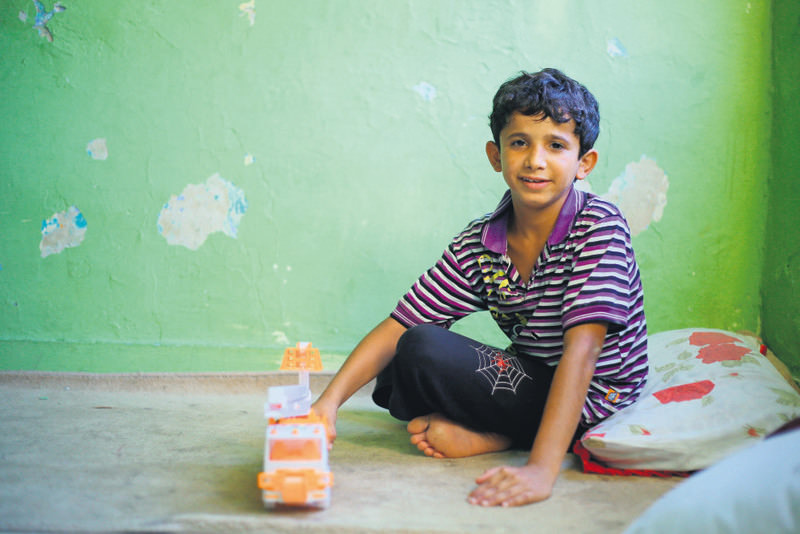 Ahmed Hamdo playing with toys in his scarcely furnished room. He stays with his brothers and sisters in a dilapidated house in u0130zmir.
by Daily Sabah with Wires Jul 23, 2015 12:00 am

The beating of an 11-year-old Syrian boy by a restaurant manager in İzmir caused outrage in the country, one of the few good shelters for Syrians because of its hospitable population

In a country where xenophobia is rare and not tolerated, images of a young boy beaten by the staff of a restaurant in the western city of İzmir have drawn the ire of the public. Turkey is among the few hospitable environments for millions of Syrians displaced by a four-year conflict in their country. It boasts state-of-the-art tent camps for refugees, a continuous flow of aid to Syrians both in the country and in Syria and the public embrace of desperate Syrians whose number has risen over 1.8 million.

So, when the photos of a bloodied Ahmed Hamdo choking with tears after the manager of a restaurant allegedly slapped him repeatedly had surfaced earlier this week, it led to understandable anger among the public. People took to social media to condemn the incident, describing the assailants as "animals." The image of Ahmed Hamdo has quickly become a symbol of condemnation against anti-Syrian hatred embodied on social media where some users brand Syrians as "beggars" who should be sent back to their country. Others sought to locate the whereabouts of the boy to send him aid.

The boy had fled the scene while the police launched an inquiry into the incident. The police located and identified the boy who was selling paper tissues to earn a living for his family when the restaurant manager slapped him for harassing his patrons.

On Thursday, Bülent Delican, İzmir representative of the ruling Justice and Development Party (AK Party), told the family that Davutoğlu was personally interested in the case and would help them. Delican said they were deeply worried about the incident. "We are a hospitable nation and this is something done by a few impolite people, contradicting the tolerance of the people of İzmir. They will be held accountable for what they've done," he said.

Giving an account of the incident, Hamdo said restaurant staff dragged him outside while he was trying to sell paper tissues to a female customer. "They hit me and trampled on me. I was about to pass out but some Syrians there helped me and gave me water," he said. Restaurant manager Adnan Pekiyi, who was photographed leaning over the boy after he fell on the ground, had earlier denied allegations, claiming he was trying to help the boy "quarreling with a Syrian girl."

The boy's mother, Gusun Ubaid, said they migrated from Syria's Aleppo because of the war and stayed in a refugee camp near the Turkish border before traveling to İzmir four months ago. She said her husband, who used to repair TVs in Syria, could not find a job in Turkey, adding the family was living off money Ahmed earned as well as money donated by charities. The family and their relatives, 12 people in total, live in a dilapidated two-room house.

"We are glad that Turkey welcomed us. May God bless Turkey for helping us. I did not file a complaint against those beating my son. May God punish them," she said.

The boy's father, Abdul Abdullah, denied the restaurant manager's claim that he was intervening to break up the children's quarreling. "Syrians who helped my son told me they rescued my son from the attack of people in the restaurant," he said.

Turkey is among the countries with a high rate of expenditure for Syrians, currently standing at over $5 billion, a great financial burden that the country was left to shoulder as one of the few countries in the region along with Jordan and Lebanon to host the refugees. The ubiquitous presence of Syrians occasionally leads to outbursts of violence aggravated by ultranationalist groups accusing the displaced Syrians of "stealing their jobs and committing crimes." Last year was particularly tense for Syrians when a string of attacks targeting cities near the Syrian border led to their evacuation. No major unrest targeting Syrians has been reported this year.
Last Update: Jul 23, 2015 9:32 pm
RELATED TOPICS