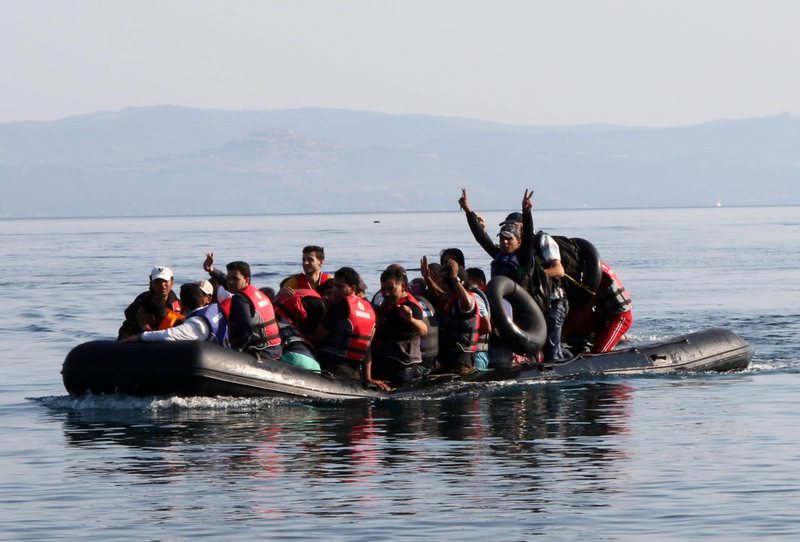 Migrants cheer as they arrive from Turkey to the Greek island of Lesbos. They were lucky to complete their journey safely, as many perish or are rescued as their unsafe boats sink along the way.
by Daily Sabah with Wires Aug 18, 2015 12:00 am

Turkey faces an unprecedented flow of illegal immigrants, mostly from war-torn Syria, who use the country as a transit route to Europe, their ultimate destination. The country's proximity to the islands of EU-member country Greece makes it the only viable route. It is also the most dangerous, as migrants choose inflatable rubber boats as their favorite means of transportation. Although those boats are far from safe, especially with dozens of migrants huddled in them, way over the boat's capacity, they are still in huge demand.

In proportion to the influx of migrants, the sales of inflatable rafts as well as life vests have dramatically increased. Sellers say they have run out of stock, especially in Turkish cities on the Aegean Sea coast. The price of inflatable craft went up to TL 5,000 ($1,748) due to high demand, from as low as TL 1,000.

Every day, hundreds await in seaside towns on the Aegean coast, a more than 2,600-kilometer-long coast stretching from Çanakkale in the north to Muğla in southwestern Turkey. At night and sometimes in broad daylight, they hop into the dinghies arranged by smugglers to travel to Greek islands lying a few kilometers off the Turkish coast. The small inflatable boats are capable of carrying four people, but desperate migrants risking the capsizing of the boat travel in dozens. Though a few boats make it to the Greek islands daily, the rest of the scores of boats usually end up capsizing, with migrants struggling to swim to safety. Those not knowing how to swim and those without life vests end up dead if the Turkish Coast Guard, who ceaselessly patrol the coast, cannot make it in time.

Mohammad Ali, a 36-year-old Syrian national from Idlib is waiting in Bodrum with his wife and two sons, spending days in a park as they wait for a second attempt to cross into Greek islands. Speaking to Associated Press, he said they aborted their first attempt after the smuggler they negotiated with for crossing into Greece brought a boat for eight people but tried to cram sixteen people. "It was about to sink. I was afraid of drowning so I decided to turn back," Ali says.

A Turkish government official told Associated Press that the human smugglers have turned to the Aegean in the past year using inflatable boats he called Zodiacs, after patrols increased on popular migrant routes across the Mediterranean.

"The Aegean is a lot easier. All they need is a Zodiac boat and they are on an island in half an hour," the official said.Life vests also saw their prices skyrocket due to a boost in demand. Migrants' only lifelines in the risky journey to Greece are their ability to swim and their life vests. Since swimming is of no help during inclement weather, life vests come in handy for migrants. Their prices range from TL 15 to TL 90, while impoverished migrants are tricked into buying cheaper but fake life vests. In İzmir, a western city littoral to the coast, almost every shop, ranging from department stores to grocery stores, puts life vests on sale as more and more illegal immigrants descended into the city recently. Syrians carrying black bags containing life vests are a common sight in the city. Authorities implemented several measures last week to stop the steady flow of refugees in the city. Life vests are collected from migrants who were sent to refugee camps in southern Turkey. Still, some Syrians preferred to stay in the city, hoping they would be able to board a boat to Greece, if they are not intercepted by the Coast Guard first.

Last but not least, another item also in high demand is balloons. A favorite children's toy, balloons are a reliable way for migrants to keep their money, cellphones and other belongings dry at sea.

With conflicts and other problems in their countries worsening, it seems like Turkey will remain a hub for illegal immigrants seeking to pursue a better life in Europe. Just yesterday, four illegal immigrants were saved from drowning by the coast guard off the coast of Ayvacık, a town on the northern Turkish coast of the Aegean Sea. They were part of a group of 245 migrants from various countries who boarded unsafe inflatable boats that were about to sink.

As many as 1,000 migrants are estimated to cross every day to the Greek islands of Lesvos, Kos as well as the smaller ones dotting the Aegean Sea.
RELATED TOPICS