No sign of drop in refugee numbers after toddler's death 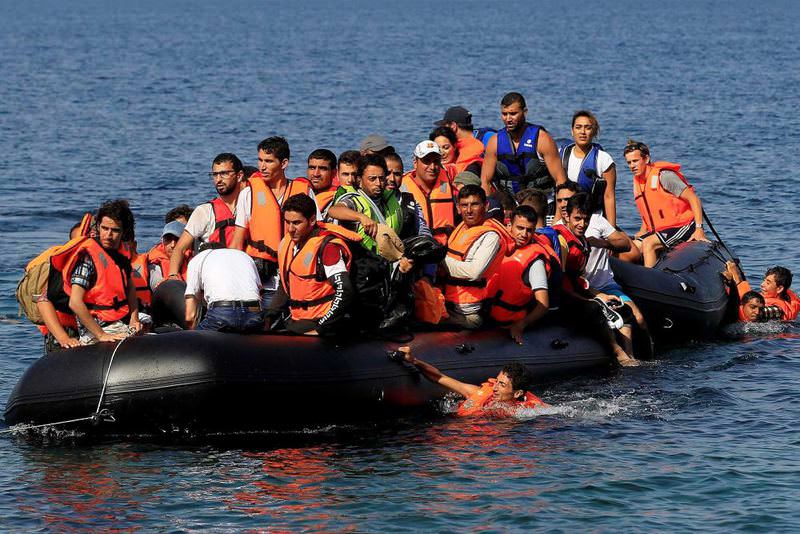 Migrants crammed in a boat heading to the Greek island of Mytilini on Sept. 10. Despite the risk, dangerous journeys prevail in the Aegean Sea.
by Daily Sabah with Wires Sep 11, 2015 12:00 am

The Coast Guard intercepted 611 refugees on the Aegean Sea in one day. Refugees are still risking their lives after a sinking boat claimed the lives of 12 people including Aylan Kurdi, a child whose image of his lifeless body drew worldwide sympathy to the refugees' plight

Refugees, whose plight in their journey to Europe, which was highlighted by the tragic death of a Syrian toddler, appear undeterred after the sinking of a boat that claimed 12 lives off the coast of Bodrum. One week after the death of Aylan Kurdi, 3, and 11 others, the town, a popular summer resort for Turkish and foreign tourists, are still awash with refugees, mostly from Syria, who plan illegal crossings to the Greek islands from Turkey's Aegean coast, Agence France-Presse (AFP) reported. According to figures from the Coast Guard, 611 refugees from various countries were intercepted in one day.

Speaking to AFP, Al, a 31-year-old Syrian from Hasakah, said he still wants to go to Greece, the nearest European Union member country for Syrians in Turkey dreaming of a new life in Europe. Ali and his family are planning a trip to the Greek island of Kos, but his efforts to find a smuggler to arrange the trip on dinghies has failed so far. He complains the smugglers are ultimately unreliable as "they give you different prices and say nothing is guaranteed."

Though the number of refugees intercepted by the Coast Guard dropped after Kurdi and the others' deaths, the tragedy expects to do little to deter refugees stuck between returning home where a four-year-old civil war is underway and Turkey, which struggles to cope with taking care of nearly 2 million Syrians. "I want to escape and never come back home again," Ali said, adding he is not afraid of dying on the journey that he acknowledged is dangerous.

According to the latest Coast Guard figures, 66 refugees attempting to cross into Greece by sea were intercepted in Bodrum on Sept. 8, a relatively low number compared to hundreds captured almost daily. Between Sept. 4 and Sept. 7, 1,117 refugees were stopped by Coast Guards all across Turkey's Aegean coast, from Çanakkale in the north to Muğla in the south.

For Omar Dalamey, the European dream is over. He is the brother of Bakir, 17, who went missing in the boat accident that killed Kurdi, who became a symbol of refugees risking death with the image of his lifeless body washed ashore in Bodrum. Dalamey survived the accident and now awaits the return of his brother who went missing along with three others. They were on one of the two boats that sank off the coast. His was crammed with 17 refugees from Syria. Dalamey goes to the hospital and prosecutor's office every day in Bodrum to find out if there is any news from his brother, who is most likely dead. The Dalamey family is originally from Iraq but then immigrated to Syria years ago. After the Syrian conflict broke out, they fled to Turkey and have lived in the southern city of Adana since 2010. Dreaming of a better life, they decided to travel to Europe 15 days ago, paying 2,500 euros to human smugglers for each family member. Soon after they departed the coast, the overcrowded boat hit bad weather and started taking on water. Dalamey managed to survive but waited for help at sea for more than an hour before the Coast Guard came to their aid.

"Europe was a dream for us, but it ended for us," Dalamey told Anadolu Agency (AA). "I don't plan to go to Europe in the future. I will stay in Turkey," he added. Dalamey believes others will continue to try. "They are determined, and even if I plea to them not to go, they wouldn't listen to me," he said.

One of the reasons for last week's tragedy was because refugees were forced to take the sea route, as Turkey's land borders with Bulgaria and Greece are tightly protected. However, the death of 12 migrants led some to reconsider the land route. Edirne, in northwestern Turkey, is popular among refugees as it borders both Bulgaria and Greece. Due to a rise in the number of migrants preferring the land route, security forces stepped up measures in the city. Buses packed with refugees are monitored and operations against illegal immigrants in villages near the border have increased. Since January, 11,000 illegal immigrants were captured in Edirne, mostly Syrians. In the past three days, 575 refugees were intercepted. AA reported that the Interior Ministry implemented new rules for refugees, especially for Edirne. Bus companies will be obliged to check ID's of passengers before selling tickets and banned the companies from selling tickets to Syrian refugees who are not registered in the city. Refugees registered in another city will not be allowed to travel to the border city, and bus companies selling tickets to refugees from other cities will be charged with human smuggling.
RELATED TOPICS