Official wedding at synagogue a first for Turkey's Jewish community 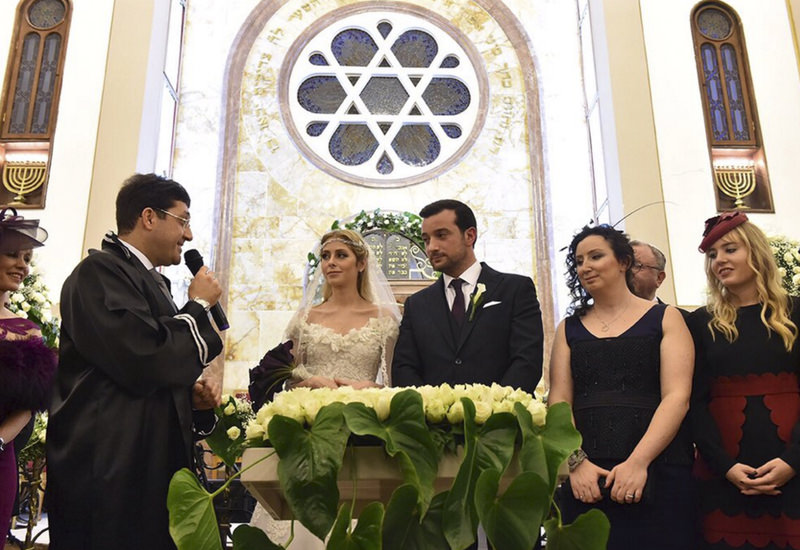 by daily sabah Jan 12, 2016 12:00 am
Istanbul's Neve Şalom synagogue hosted a historic wedding ceremony on Sunday night. For the first time, it was the scene of a Jewish wedding ceremony officiated by a local official. A large crowd of guests and prominent names in the Turkish Jewish community attended the ceremony at the synagogue in the city's Beyoğlu district. Murat Hazinedar, mayor of Beşiktaş, officiated the wedding of Selin Saporta and Vedat Peranva after chief rabbi İsak Haleva married the couple in a religious ceremony.

İshak İbrahimzadeh, the head of Turkey's Jewish community, said on his Twitter account that they prayed for the Turkish state and President Recep Tayyip Erdoğan at the "landmark" ceremony.

Neve Şalom is the largest synagogue in Istanbul where the majority of the 23,000 Jews in Turkey live and the preferred site for the weddings of community members. Though religious weddings are not limited to synagogues, a marriage license is required from the mayor's office or local civil registry to validate it.

Turkey's Jewish community is among the few minorities that did not suffer from treatment as second-class citizens in the past by the Republic of Turkey, which long pursued a policy turning a blind eye to the problems of minorities or seeking to repress them by restraining their rights. Neve Şalom synagogue, however, has been the target of three deadly attacks since it was opened in 1951, raising security fears amid the community.

This is the second landmark event for the Jewish community in the past two months after the first outdoor celebrations of Hanukkah in Istanbul in December following a long respite due to fears of attacks.
RELATED TOPICS