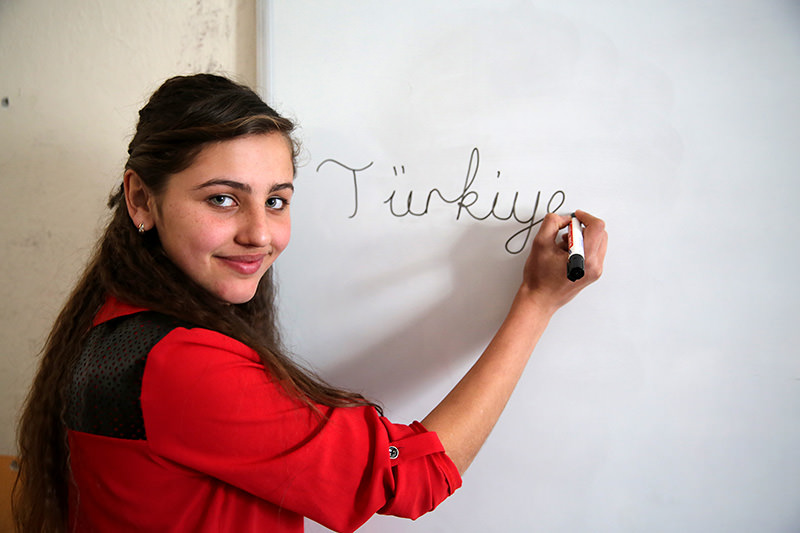 | AA photo
by Anadolu Agency Feb 02, 2016 12:00 am
"There was always the fear of death due to bombardment there, which we cannot forget," said Elmira Elisova, a Meskhetian Turk, who recently settled in the eastern province of Erzincan. Elisova is just one of thousands of members of an ancient ethnic-Turkic minority who fled their homes in Ukraine because of the conflict that erupted in April 2014 between government forces and pro-Russian separatists.

Since April 2014, more than 6,000 people have lost their lives while 1.4 million people have been internally displaced in the conflict, according to the United Nations. More than 400 Meskhetian Turks, the majority of whom are from Donetsk, were brought to Erzincan in December 2015, where the government prepared residential buildings for them. They have been living in the city under Turkey's recently-adopted asylum measures.

Elisova – an attorney by trade – along with her two children, have been living in Erzincan for more than a month and cannot forget what she experienced in Donetsk city. "We saw bodies lying on the ground there and bombings. These were frightening things that you never want to witness in your life," she said. According to her, when she arrived in Turkey – which she describes as a "motherland" – a new chapter opened for her family. "When the plane landed at the airport, the first thing that came to my mind was, 'Is there is no war anymore? I am in a safe place,'" Elisova said.

Nergis Suleymanova, a 37-year-old nurse, holds similar views: "The day when we arrived in Turkey was the most meaningful day of my life. Words fail to explain my feelings at that time. I cannot forget that day," Suleymanova said. Talking about her new life, she added: "During the conflict, it was our dream to come to Turkey and establish a future for our children. We are thankfully in peace and comfort right now." Suleymanova came to Turkey along with her three children, but her husband is still in Donetsk.

More than 2,500 additional Meskhetian Turks are to be brought to Turkey within two months, said Fuat Uçar, secretary-general of the Istanbul-based World Meskhetian Turks Association. Suleymanova's husband is expected to be among them.

The community is very hopeful for a future in Turkey

"I could not have worked there. My plan is to do my job here and to stay here permanently," Elisova said. "To become a Turkish citizen is very important for us at the moment, to be able to establish a stable life here. I am looking forward to having this," Suleymanova added.

They will obtain Turkish citizenship within a year, Uçar said. "Officials are doing their best to accelerate the process," he added.

Around 60,000 Meskhetian Turks have been living in Turkey since the 1990's, according to the Istanbul-based federation. More than 40,000 are living in the western province of Bursa while Istanbul hosts around 10,000 Meskhetian Turks. They also reside in the provinces of Antalya, Ankara, İzmir, Aydın and Çanakkale. Azerbaijan also hosts members of the ethnic community.

This moving and relocation reflects the reality of life for Meskhetian Turks. In 1944, they were expelled from their homeland – the Meskheti region of Georgia – by Soviet leader Joseph Stalin in an attempt to remove Turks from the shores of the Black Sea. They faced discrimination and human rights abuses before and after deportation. In that period, they migrated to mainly three countries: Kazakhstan, Kyrgyzstan and Uzbekistan. However, some experienced another migration in 1989 when ethnic clashes started in Uzbekistan, and they traveled to eastern Ukraine in 1990. Some of them have seen three deportations in their lives while the others have endured two separations. However, their goal is the same: Not to live through another migration. "It is never easy to continually migrate," Elisova said. "You leave everything – home and neighbors – behind. It is a very sad thing." "I believe this will be our last stop and we will not be forced to go anywhere anymore," Suleymanova said. "Our biggest wish for now is this."
Last Update: Feb 02, 2016 2:39 pm
RELATED TOPICS