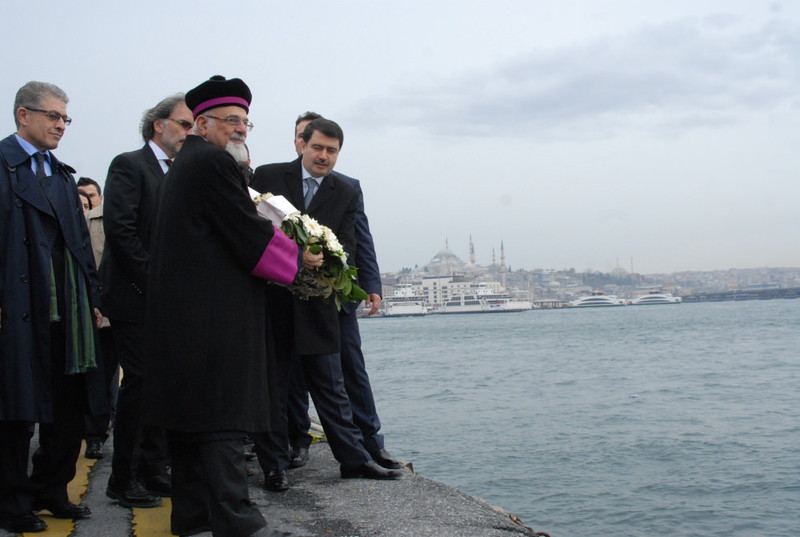 Turkey marked Wednesday the 74th anniversary of the sinking of a ship, the Struma, off the country's Black Sea coast that led to the deaths of 768 Jewish refugees fleeing Nazi Germany. Turkish officials and Jewish community leaders left wreaths on the spot where it sank

The 1942 sinking of the Struma, a ship carrying Jews from Romania that was sunk off Turkey's Black Sea coast after it was torpedoed by a Soviet submarine, was commemorated in Istanbul yesterday. Turkish officials and Jewish community leaders left wreaths at the sea along the Sarayburnu coast where the ship was anchored for days before it sank in memory of the 768 victims died aboard.

This is the second time that an official ceremony has been held for victims after last year's landmark event, which was attended by a government minister for the first time.

Addressing the event, Turkey's Jewish community leader İshak İbrahimzadeh recalled the account of the disaster's sole survivor who lamented that no one saw them as "human beings" and thus did not help the passengers. He said they could learn lessons from what happened and prevent "a repeat of the suffering caused by people inclined to evil." İbrahimzadeh also reproached the way Ankara handled the Struma issue in 1942. "Turkey, which saved us from Spanish Inquisition, Turkey, which today opens its doors to refugees, abandoned 768 Jews then for the sake of neutrality (in World War II)," he said. "We appreciate that our country, which was a party to the disaster, took a step last year (to remember the Struma), and we see it as a ray of hope. 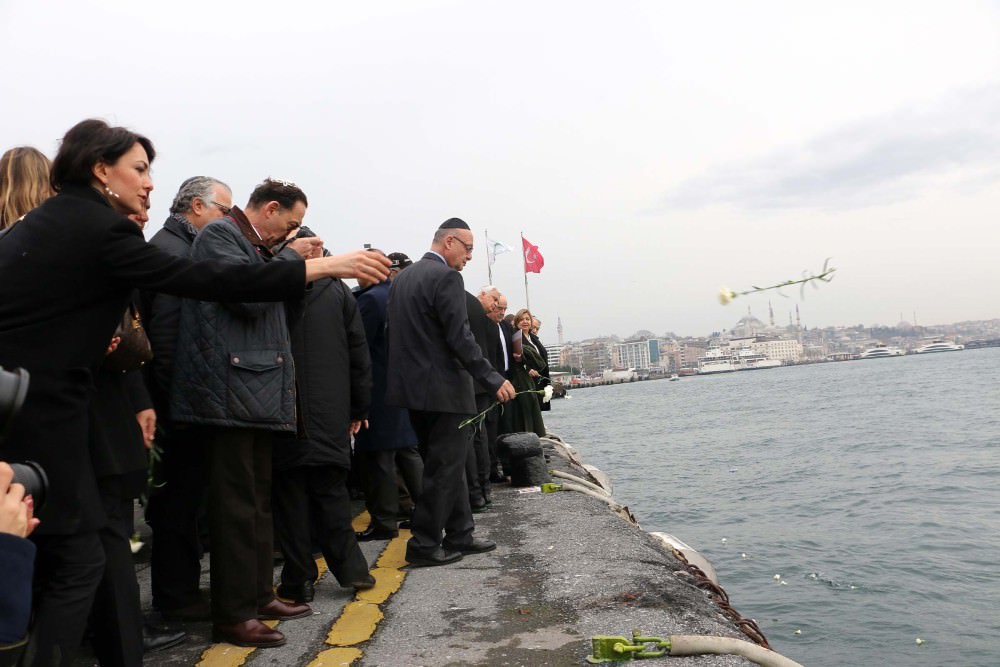 People tossed flowers into the sea in commemoration of Struma disaster's victims. The first large-scale event to mark the tragedy was held last year in Istanbul.

İbrahimzadeh said the Jewish community could not even recite the Kaddish, a prayer recited for the deceased, for the Struma victims for years. "I apologize to them for this shame," he said.

Istanbul Governor Vasip Şahin said at the event that the world did not learn from the past mistakes of turning a blind eye to tragedies like the Struma, pointing to Syrians fleeing a war who perish in the Aegean Sea en route to Europe.

Mourners then joined Chief Rabbi İzak Haleva who prayed in memory of the victims before hurling a wreath at the spot where the ship sank.

The Struma had left Kosije, Romania, in 1941 and was full of Jews fleeing to the Palestinian territories during World War II. It broke down near Istanbul and was anchored off the coast of Sarayburnu on Dec. 15, 1941. Upon pressure from Britain, which restricted Jewish access to the Palestinian territories, the Turkish government diverted the ship's route although it allowed some passengers to leave the vessel. Romania turned down a request to readmit the ship. It was then towed to the Şile coast after resting for 70 days off the coast of Sarayburnu, but a Soviet submarine blocking access to the Black Sea at the time torpedoed the vessel. A total of 768 people, including 103 children, were killed, while only one person, David Stoliar, a 20-year-old man, survived.

Although its ties with Israel remain strained amid talks of reconciliation, Turkey maintains good relations with the Jewish community it hosts. A majority of the country's Jewish population, which is estimated to be around 23,000, lives in Istanbul, and many are descendants of Sephardic Jews who took shelter in the capital of the Ottoman Empire in the 15th century. Turkey joined the International Holocaust Remembrance Alliance in 2008, an intergovernmental body established in 1998 to coordinate political and social support for Holocaust education, remembrance and research as well as to combat anti-Semitism. Since 2015, the government has been represented at Holocaust commemoration ceremonies in the country.

Though the Turkish administration at the time was partly blamed for the Struma disaster, the country is also credited with reaching out to Jews fleeing the Nazi regime. In the 1930s, Turkey received more than 130 academics fleeing persecution in Nazi Germany, and those academics are known for their pioneering contributions to science in the country. The Holocaust is also known in Turkey for the efforts of a Turkish diplomat, Selahattin Ülkümen. Ülkümen, the Turkish consul-general on the Greek island of Rhodes, who is credited with saving 42 Jewish families who were to be sent to concentration camps in Europe by confronting the officer commanding the Nazi forces that were taking over the island and convincing him to release Jewish Turks on the island. Ülkümen issued Turkish passports to the Jews for their safe passage to Turkey.
Last Update: Feb 25, 2016 1:34 am
RELATED TOPICS