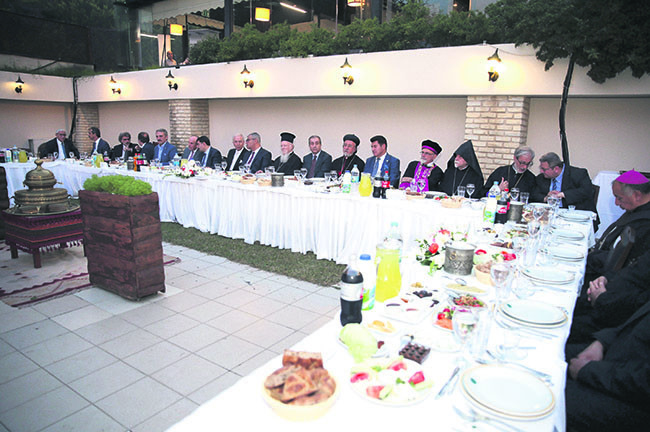 Members of Christian and Jewish communities accompanied Muslims in a traditional iftar fast-breaking dinner hosted by a local foundation in Istanbul on Thursday evening. Deputy Prime Minister Veysi Kaynak, who oversees the affairs of religious minorities, was among the guests of the dinner attended by representatives of Greek, Armenian, Assyrian, Chaldean, Bulgarian, Georgian and Jewish communities. The dinner was hosted by the Mardin Education and Solidarity Foundation (MAREV) in the southeastern city known for its diverse population of Muslims and Christians.

Speaking at the dinner, Kaynak said that the word minority for non-Muslim communities was the wrong term and that everyone was "equally a citizen of the Republic of Turkey." "We are a united nation. People of different faiths coexisted for centuries in this land. Everyone respected each other's faith. This is the true definition of secularism, a concept that does not force a single faith upon a country or mistreats anyone for his or her faith," he said.

Kaynak touched on requests from communities and said religious communities do not "ask much from the state." "They want their children to learn their own languages in their own schools. They want their places of worship back, they want the return of properties seized from them. These have never been unreasonable requests," Kaynak said.

Authorities are working on a new set of regulations to resolve a set of issues regarding foundations, the main source of income and a cultural identity for minorities. If approved, regulations will allow independent elections in these foundations, giving them free conduct in their daily affairs. It will give broader freedom to those communities that are mostly concentrated in Istanbul after decades of discriminatory policy and tight control by the state. Minorities in Turkey were long treated as second-class citizens in the 20th century. The controversial wealth tax imposed in 1942, targeting wealthy non-Muslims, pogrom in 1934 and 1955 and the deportation of non-Muslim Turkish citizens in 1964 added to a fear of the state among non-Muslim minorities. The democratization package announced by the government a few years ago looks to change the state's view of minorities and restore the rights taken from them. Then prime minister and current President Recep Tayyip Erdoğan announced in 2011 that hundreds of properties that were confiscated from minorities over the years would be returned and compensation would be paid for properties later sold to third parties. Though no comprehensive laws exist to restore property rights, courts are gradually returning properties to minorities that prove ownership.