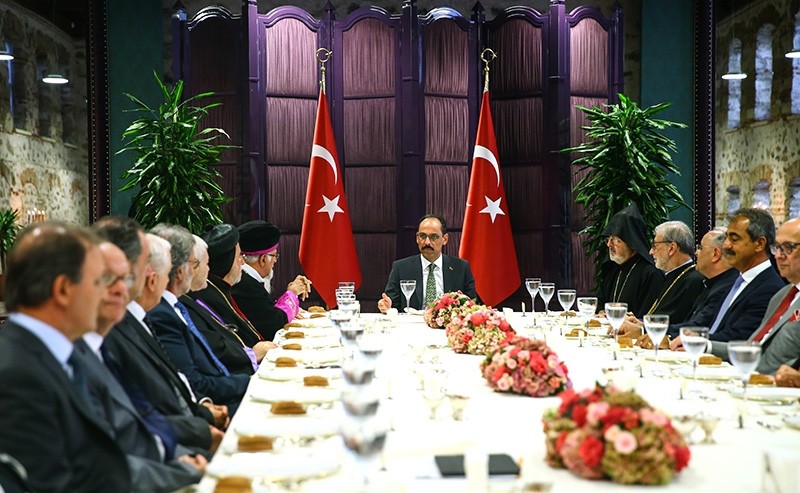 Presidential Spokesman Ibrahim Kalın on Wednesday hosted a dinner for representatives of Turkey's minority communities, one day after the leaders issued a joint statement asserting that their freedom of worship is upheld in Turkey.

Also in attendance were Patriarchal Vicar of the Syriac Orthodox Church, Yusuf Çetin; Archbishop Levon Zekiyan, who serves as Armenian Catholic archeparch; François Yakan, acting patriarch of the Chaldean community; and Orhan Çanlı, acting patriarch of the Syriac Catholic Church of Turkey. Heads of foundations representing non-Muslim communities, from Jewish community leader Ishak Ibrahimzadeh to Bedros Şirinoğlu, who represents an umbrella organization of Armenian foundations, were also present at the dinner, all of whom signed the declaration issued Tuesday.

On Tuesday, leaders of every non-Muslim community in Turkey came together to sign a joint declaration saying they are free to follow their faith in Turkey and denying allegations that members of minority faiths have experienced "pressure" on their communities.

The declaration sought to address allegations against the Turkish government that people of minority religions – including Orthodox Christianity, Syriac Christianity, Judaism and others – had been persecuted or hindered from worship and free expression of their faith.

The dinner held Wednesday was to express President Recep Tayyip Erdoğan's sensitivity to issues of religious freedom and affirm the joint statement issued the previous day.

Kalın was also expected to open discussion on the minority faiths' views on Turkey's domestic and foreign policy, in the spirit of fostering mutual understanding and dialogue.