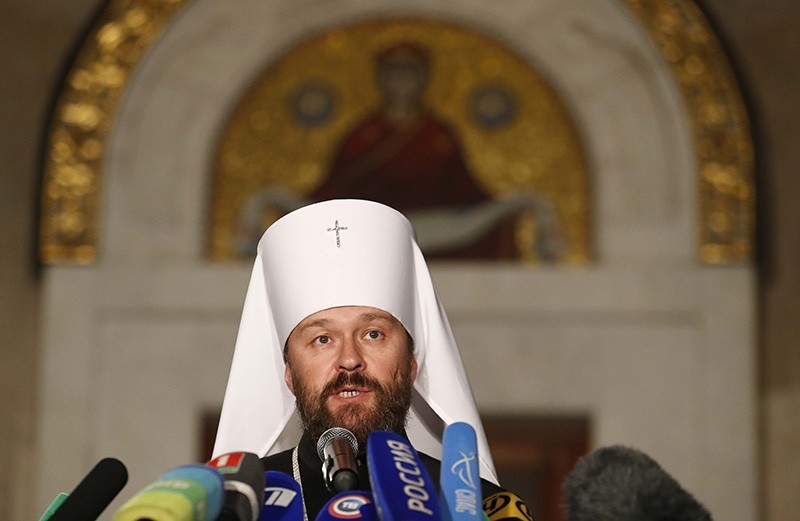 Metropolitan Hilarion, chairman of external relations department of the Moscow Patriarchate and permanent member of the Holy Synod of the Russian Orthodox Church, speaks during a news conference in Minsk, Belarus, Oct. 15, 2018. (Reuters Photo)
by Compiled from Wire Services
Oct 16, 2018 12:00 am

The Russian Orthodox Church said Monday it is breaking ties with the Istanbul-based Ecumenical Patriarchate over its decision to grant independence to the Ukrainian church, which Moscow does not recognize.

"A decision has been made to rupture full communion with the Constantinople Patriarchate," which means priests from the two churches cannot serve and worshippers cannot take communion together, Hilarion, the bishop in charge of the Russian Orthodox Church's diplomacy, told journalists in Minsk.

Under the leadership of Ecumenical Patriarch Bartholomew I, the patriarchate last week removed its condemnation of leaders of schismatic Orthodox churches in Ukraine. The decision marked a step toward establishing an ecclesiastically independent - or autocephalous - church in Ukraine.

The Orthodox Church in Ukraine has been under the jurisdiction of the Russian Orthodox Church since the late 1600s. Calls for the Ukrainian church's independence have increased since Moscow's 2014 annexation of the Crimean Peninsula and its support of separatist rebels fighting in eastern Ukraine.

Metropolitan Hilarion, who heads the Russian Orthodox Church's foreign relations department, said after the Holy Synod's meeting in Minsk, Belarus on Monday that rupturing ties with the Ecumenical Patriarchate was a response to its "lawless and canonically void moves."

"The Russian Orthodox Church doesn't recognize those decisions and won't fulfill them," he said. "The church that acknowledged the schismatics has excluded itself from the canonical field of the Orthodoxy."

Ukrainian President Petro Poroshenko this year asked the Constantinople Patriarch Bartholomew to make a decision in favour of an independent church for Ukraine, a prospect that the Russian Orthodox Church had rejected outright.

Moscow considers the Kiev Patriarch Filaret to be a schismatic, a view Constantinople had backed since the 1990s but reversed last week amid the drive by Ukraine for its own Orthodox Church independent from Moscow.

The Constantinople Patriarchate, a leading Orthodox authority, also overruled its own decision from the 17th century which adjoined Kievan Orthodox churches, or the Kievan Metropolis, to Moscow.

Most of the Orthodox parishes in Ukraine have historically been under the umbrella of the Moscow Patriarchate, and many of these may eventually switch to the new independent Ukrainian Orthodox Church, despite Moscow's wishes.

Hilarion said the decision by Constantinople to pronounce the entirety of Ukrainian churches as independent from Moscow "goes against historical truth" as the Kievan Metropolis of the 17th century corresponded to a different geographical area.

He added that Constantinople's decision effectively creates a religious schism. "We cannot be in communication with this church," he said. "We hope that common sense prevails and that the Constantinople Patriarchate changes its mind."

Moscow has expressed concern over the past months that a decision to grant Ukrainian Orthodox Church independence would lead to physical confrontations in Ukraine over some of its most iconic Orthodox landmarks, such as the Kiev-Pechersk Lavra monastery which is used by the Moscow Patriarchate.

The Kremlin last week said that in case of "unlawful" and violent events, it would protect the interests of Orthodox believers through "political and diplomatic" means.

On Sunday, Poroshenko said that "there would be no pressure" and any believer would "choose his own path to God," but stressed that an independent Ukrainian church goes hand in hand with its political sovereignty.

Hilarion said Moscow "hopes for common sense" and that Poroshenko will fulfill his promise. "We hope that there won't be any clashes," he said.