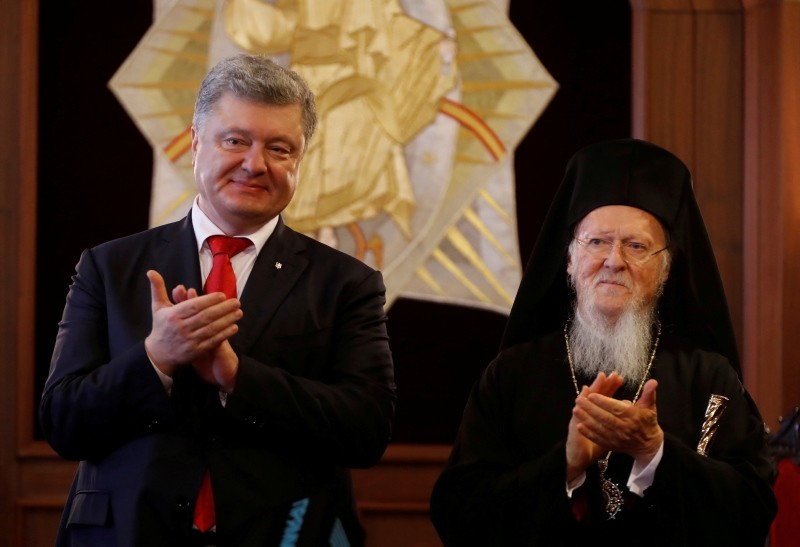 Ukraine's President Petro Poroshenko, left, and Ecumenical Orthodox Patriarch Bartholomew I applaud after their meeting at the Patriarchate in Istanbul, Nov. 3, 2018. (Reuters Photo)
by Daily Sabah with Wires Nov 03, 2018 12:00 am

Ukrainian President Petro Poroshenko and Greek Orthodox Patriarch Bartholomew I signed an agreement on cooperation and collaboration between Ukraine and the Istanbul-based Patriarchate.

According to the Ukrainian president Saturday, the deal will ensure that the Ukrainian Church is given independence, also known as Tomos, in line with all the canons of the Orthodox Church.

"On behalf of the Ukrainian people, I am very grateful to His Holiness and to all the bishops of the Ecumenical Patriarchy for the extremely important and wise decision to open the road to God for the Ukrainian nation and its church," Poroshenko said after visiting the Patriarchate in Istanbul's Fener neighborhood.

"Today is a historic day. Ukraine and the Ecumenical Patriarch signed an agreement on the establishment of an independent Ukrainian Church," Poroshenko said in an Instagram post.

Following their meeting with Poroshenko, Patriarch Bartholomew expressed confidence that the independence of the Ukrainian Church will ensure unity of all Orthodox churches in the country.

Later in the day, Poroshenko attended the seventh meeting of the Turkey-Ukraine High Level Strategic Cooperation Council that convened in Istanbul.

The church in Ukraine has been tied to the Moscow Patriarchate for hundreds of years, although many parishes have split off over the past two decades to form a schismatic church. Calls for independence have increased since Moscow's 2014 annexation of the Crimean Peninsula from Ukraine.

Poroshenko, who is running for re-election next March, has strongly pushed Bartholomew to grant independence to the Ukrainian church.

In October, the Greek Orthodox Patriarchate, whose Patriarch Bartholomew is seen as the first among equals of Orthodox Church leaders, agreed to recognize the independence of the Ukrainian Orthodox Church.

The decision was a huge blow to Moscow's spiritual authority in the Orthodox world.

The Russian Orthodox Church condemned the move and announced it is breaking ties with the Constantinople Patriarchate in protest.

The Orthodox Church in Ukraine is split between three branches, one whose clerics pledge loyalty to Moscow, one loyal to Kiev that is overseen by Patriarch Filaret and the smaller Ukrainian Orthodox Autocephalous Church.

The Russian annexation of Crimea and the Kremlin-backed separatist uprising in Ukraine's east in 2014 triggered an increase in the number of believers in Ukraine loyal to Kiev Patriarch Filaret's church and seeking the establishment of an independent Ukrainian church.

Russian Orthodox Patriarch Kirill, who is seen as a strong ally of Putin, fought hard to prevent pro-Western Ukraine from getting an independent church.