Prayers for lasting unity as the faithful across Turkey mark Christmas 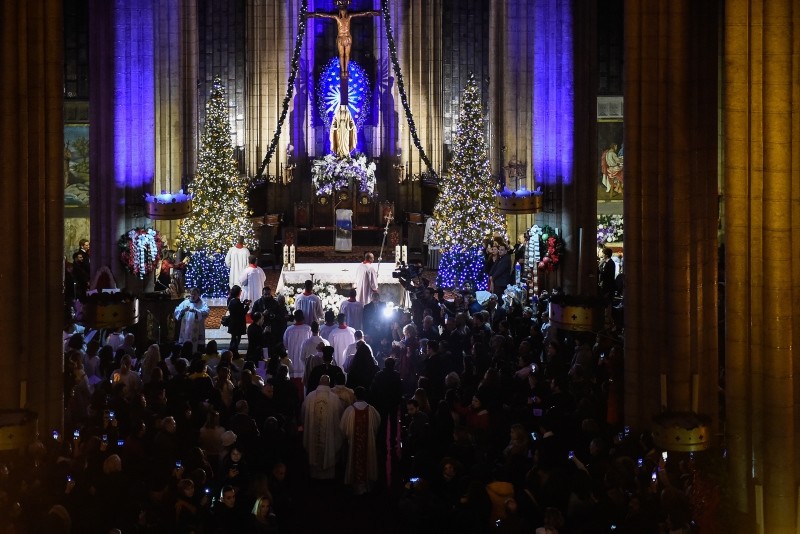 The Christian community filled the churches across the country for religious services on Christmas Eve and Christmas Day. Churchgoers prayed for peace for Christian communities who faced persecution in the region as well as keeping unity in Turkey, home to multiple faiths from Muslims to Jews, to Orthodox, Catholic and Protestant Christians.

Patriarch Bartholomew, the leader of much of the Orthodox world, led the mass at Aya Yorgi, a church in the courtyard of the Fener Greek Orthodox Patriarchate in Istanbul he presides. A large crowd including the faithful from Greece and European countries filled the church in the city's Fatih district, singing hymns, lighting candles.

Bartholomew I is regarded primus inter pares (first among equals) of Orthodox churches across the world, including Greek, Russian, Serbian and Romanian that appeal to 300 million around the world. The patriarchate has a small congregation in Istanbul but many of its followers live abroad, mainly in the U.S.

Elsewhere in Istanbul, the focal point of Christmas services was St. Antuan Church on İstiklal Avenue, the iconic street located at the heart of Istanbul. Along with a Christian congregation, tourists and guests from abroad attended the religious service led by the Neocatechumenal Way community leader in Istanbul Costa Mario. Turks took selfies in front of giant Christmas tree in front of the church while some lit candles and made wishes. The church, also known as the Church of St. Anthony of Padua, which was first built in 1725 by the Italian community, is Istanbul's largest Roman Catholic Church and it is most popular among foreigners in Istanbul for its holiday masses as they are held in a number of different languages.

"Christmas is not a birth story of Jesus Christ. It is also a call to everyone to live with God's love. May it be a time that always brings us together and keeps us bonded," Rev. Roshan Cordeiro, who led the prayers at Latin Catholic Church, said at the mass.

Elsewhere, Michael and Gabriel Orthodox Church hosted a mass led by Coşkun Teymur, the spiritual leader of the Orthodox community in the region.

The Antakya Orthodox Church in Hatay, another city in the south home to multiple faiths, also hosted a Christmas mass. Pointing out to the large crowd convened in the small church, Fadi Hurigil, a Greek Orthodox community leader, said people from all across Turkey came to the church to attend the service.

"We also hosted some 200 brothers and sisters from different faiths today," Hurigil said.

Though it is not a formal church, perhaps the most meaningful Christmas Eve service was in a house in Selçuk, a town in the Aegean province of İzmir. A large crowd of local and foreign faithful visited Meryem Ana Evi (The Abode of Virgin Mary) for a service presided by Rev. Robert Bondea.

The place is believed to have been occupied by Mary and built by the Apostle John. The Catholic faithful believe she underwent her Assumption in the house which was discovered after a series of visions by a 19th century nun, Anne Catherine Emmerich. It was certified as Mary's abode by Papacy in 1957 and is one of the places most pontiffs visiting Turkey drop by.

In Mardin, the southeastern city where a sizeable Assyriac Christian community lives, Christmas mass was held at Kırklar Church. Saliba Özmen, Metropolit of Mardin and Diyarbakır for Assyriac Church and Rev. Gabriel Akyüz of Kırklar Church presided the mass.

People sang and recited prayers in the ancient language of Assyriac and Turkish. Speaking after the mass, Özmen said they prayed for an end to wars in the world. Ayda Bayruğ, a member of the congregation, said Mardin is unique in terms of observing festivals of four different faiths.

Another mass was held at Mor İşmuni Church in Mardin's Midyat district, led by Mor Gabriel Monastery's Metropolit Samuel Aktaş. Speaking to reporters after the mass, Anto Nuay, who heads a foundation running Assyriac churches in Midyat, said Christmas brings together the faithful with "Ezidi and Muslim brothers and sisters."

"We extend them greetings in their own festivals too. Midyat is a place where people of different religions mark their festivals together," he said.

"We did not expect such a large crowd as Christmas fall into a weekday this year," Father Yusuf Akbulut, who presided the mass, told reporters as a large congregation accompanied with tourists filled the Assyriac church.
Last Update: Dec 25, 2018 4:20 pm
RELATED TOPICS