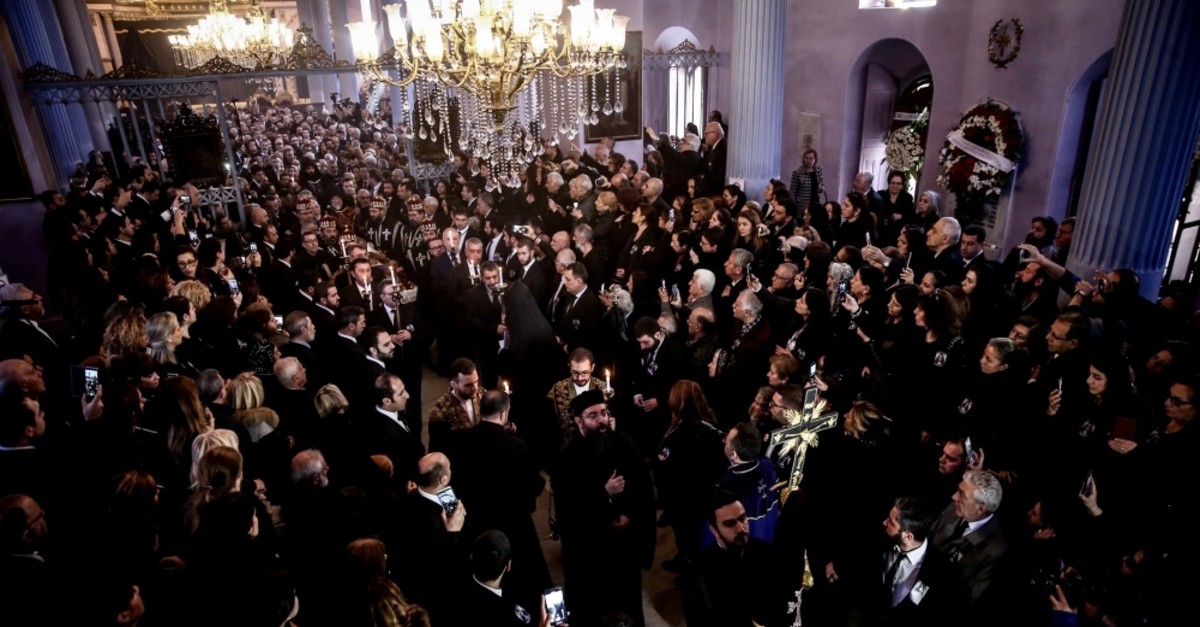 Turkey mourns Mesrob Mutafyan, or Mesrob II as he is formally known, the late Armenian patriarch who passed away on March 8. A huge crowd filled the narrow alleys around Surp Asdvadzadzin, the church of the patriarchate, in Istanbul on Sunday for a funeral ceremony for the beloved religious leader.

Presidential Spokesman İbrahim Kalın, former prime minister and mayoral candidate for Istanbul Binali Yıldırım, representatives of foreign missions in Turkey and dignitaries joined the Armenian faithful mourning Mutafyan. Following a solemn ceremony by bishops of the patriarchate, Mutafyan was buried at Şişli Armenian Cemetery a few kilometers away from the church in a burial plot for deceased leaders of the patriarchate. Mutafyan died at the age of 63 after a long battle with dementia that he was diagnosed with in 2008.

He was in a vegetative state at a hospital in Istanbul run by an Armenian foundation when he passed away. The Armenian Patriarchate has declared a mourning period for the late patriarch until Easter mass on April 21. Churches are barred from hosting or organizing any non-religious events during the mourning period.

The patriarch was 84th in a long line of Armenian religious leaders and succeeded Karekin II in 1998. He was a respected figure both in the Armenian community and in Turkey. After his illness, Archbishop Aram Ateşyan was appointed to serve as acting patriarch. He was born in Istanbul and studied sociology and philosophy in the U.S. before returning to Turkey. Mutafyan was ordained by the priesthood in 1979 and appointed as pastor to Kınalıada, an island near Istanbul where a small Armenian community lives, before he rising through the ranks in the patriarch and was finally appointed to lead it.

He was a respected figure for the Armenian community that is mainly concentrated in Istanbul. "We share the pains of Turkey's Armenians and Armenian society in general today. Mr. Mutafyan was a patriotic man this country raised, with his role as spiritual leader and as an intellectual. He always adhered to a uniting, embracing identity during his religious duty. He carried out important tasks for Turks and Armenians to get closer to each other and have a better understanding of each other," İbrahim Kalın said on the sidelines of the funeral.

Ömer Çelik, spokesman for the ruling Justice and Development (AK) Party who served as Turkey's former minister of European Union affairs, said on the sidelines of the ceremony that Mutafyan "patriotically" supported activities against "black propaganda against Turkey abroad" and supported Turkey's process for European Union accession. "I personally knew him and apart from being a spiritual leader, he was a fine philosopher and intellectual," Çelik said.

The Orthodox patriarchate of Armenians has the largest congregation in the community. The patriarchate traces its roots back to the conquest of Istanbul by the Ottomans and Mehmed II (Mehmed the Conqueror) who is credited with paving the way for the establishment of a patriarchate. Before the sultan granted them religious freedom, Armenians were forced to pray in the Byzantine churches of other communities in the city. The patriarchate was an influential religious authority for Armenian communities around the world until the early 20th century, but its influence decreased over time, especially after the Armenian population in Turkey diminished following World War I and after the collapse of the Ottoman Empire. Mutafyan was hailed as a uniting figure for the Armenian community during his short tenure and was vocal in his efforts to suppress divisive rhetoric between Turks and Armenians. In one of his last speeches, the patriarch called upon Turkey to develop relations with Armenia and the Armenian diaspora despite a dispute over the World War I deaths of Armenians in the Ottoman Empire, which the diaspora and the Armenian government brand as "genocide." Like Hrant Dink, a prominent Turkish-Armenian journalist who was assassinated by an ultranationalist in 2007, the patriarch had advocated dialogue between Turkey and Armenia for mutual understanding.