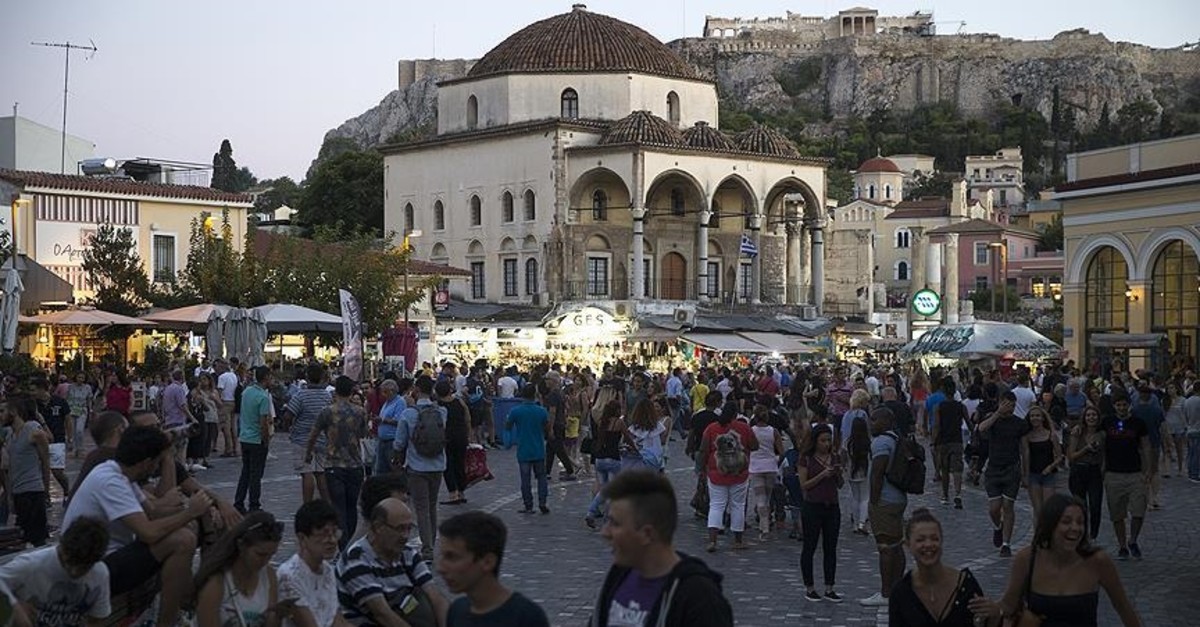 The Tzistarakis (Cizderiye) Mosque in Athens. The Ottoman-era mosque is among Muslims' places of worship converted into a museum, to the chagrin of the country's Muslim community.
by Daily Sabah with Agencies Jun 24, 2019 12:10 am

A presidential decree by Greece over the appointment of muftis drew the ire of the Turkish Muslim community in the country, claiming the decree takes away the community's rights to elect their own clerics

A decree by the Greek presidency enraged the country's Turkish Muslim community, which claims Athens is trying to trample their rights to elect their own muftis, or Muslim clerics. The decree that came into force earlier this month is about muftis in Western Thrace, the Greek region that has historically been home to a Turkish minority and defines the "judicial authority" of muftis in Komotini, Didymoteicho and Xanthi, where muftis serve the Turkish Muslim community. Among its clauses are the use of the Greek language in mufti offices and the assignment of muftis and their staff by the Greek Ministry of Education, which are viewed as restricting the rights of muftis.

İlhan Ahmet, a lawyer, a former lawmaker from Komotini and a prominent figure in the community, told Anadolu Agency (AA) that the decree basically removed the autonomy of the mufti's office in Western Thrace and called the community to file legal action for its removal.

Muftis in the region are appointed by the government despite the objections of the community, which repeatedly calls on the state to recognize clerics they elect themselves.

About 150,000 ethnic Turkish people reside in Western Thrace with their status set by the Lausanne Peace Treaty of 1923 and their rights guaranteed by several bilateral and multilateral agreements.

Ahmet said there have been two separate decrees actually that were implemented recently and both violated religious freedoms guaranteed by the Treaty of Lausanne. He said that the decrees in 2018 and 2019 effectively make the community's religious institutions a "state apparatus." "A decree in 2018 gave the administration and inspection of mosques in Western Thrace and the appointment of imams to those mosques to the Ministry of Education. It also gave the ministry the right to govern and inspect foundations [set up to run the mosques]. That same decree gave them authority to shut down madrasas [schools teaching religion]. The treaty gave us guarantee that madrasas would not be closed down by Greece, and it forbade giving whole authority for the administration of foundations and appointment of clerics by the state."

The second decree, which was implemented on June 11, instructs the appointment of all staff, from clerks to archivists in the offices of mufti and foundations by the state. "Thus, muftis will be relieved of any authority they have, and their offices would be ordinary state offices. This is part of a long-term plan to keep muftis under state control," Ahmet said. "So, any mufti appointed by the state would be a puppet controlled by the state. Certainly, the state can recognize muftis elected by the community, but these people will not have any authority. To sum it up, a mufti, whether elected by the community or picked by the state, will be someone without any say over who he can appoint to work as his staff." He said that the timing of the latest decree, which surfaced shortly before the parliament went into a summer recess, was "meaningful." "Therefore, it wouldn't be open to parliament's inspection. Now, the only way for cancelation of the decree is filing a lawsuit over violation of Lausanne," he continued.

The Turkish minority in Greece faces a variety of issues, including state denial of ethnic identity, inadequate education provision and restrictions on freedom of religion, purchase of property and political representation.

The Consultation Committee of the Western Thrace Turkish Community (BTTADK), a leading group representing the community, had earlier issued a statement denouncing the latest decree. In a statement, the committee said the decree was the "product of malicious efforts" and "unacceptable" for the community. The statement says the office of the mufti, under the guise of "modernization," was targeted by the decree that both goes against the Lausanne Treaty as well as religious freedom and international legal regulations, along with norms of the European Union, which Greece is a member, on freedom of religion and conscience. The committee said the minority was not consulted in drafting the decree and Athens rejected their calls for a meeting over the decree.

For its part, Turkey on Friday criticized the decree. "Greece violates the Lausanne Peace Treaty by not recognizing muftis selected by the Turkish minority," Foreign Ministry Spokesman Hami Aksoy said, adding that the move violated the minority's religious rights. Noting that this decree would eliminate the autonomy of the mufti establishment in the country, he urged Greece to have intimate and comprehensive communication with the Turkish minority to resolve this problem in line with the Lausanne Treaty. He said Greece must recognize muftis elected by the minority and reverse its policy of imposing illegally appointed ones. Aksoy also noted that it was "worrying" that such intrusive and negative acts took place in an EU member state.