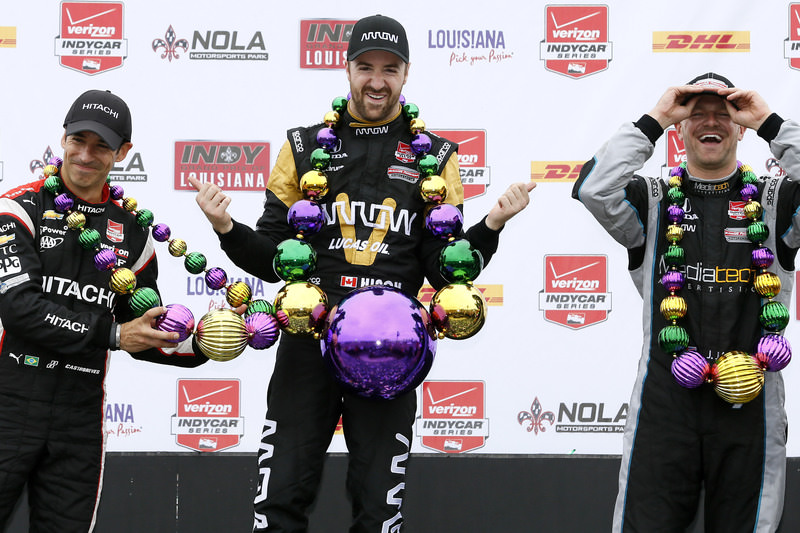 Winner James Hinchcliffe, center, of Canada, runner up Helio Castroneves, left, of Brazil, and third place finisher James Jakes, of England | AP Photo
by Daily Sabah with AP Apr 13, 2015 12:00 am
James Hinchcliffe cruised to what would be the easiest victory of his IndyCar career on Sunday at the inaugural Indy Grand Prix of Louisiana.

The Canadian had a wet track and a fortunate pit strategy to thank for his fourth career victory.

Hinchcliffe, racing for Schmidt Peterson Motorsports, pitted only once on Lap 13, and then spent much of his day leading the field around the NOLA Motorsports Park under a full-course yellow flag.
Because of several wrecks in the traffic behind him, 25 of 47 laps were run under caution. The race was supposed to run 75 laps, but ended fittingly under caution as a timed race.

The last chance the drivers had to race under green was cut short by a spectacular three-car wreck involving Simon Pagenaud, Ryan Hunter-Reay and Sebastien Bourdais early in the first lap of a restart with less than 10 minutes remaining.

The wreck began when Hunter-Reay squeezed Pagenaud onto a wet spot, which caused the Frenchmen to slide onto grass and then back on track at the next turn, where he essentially broadsided Hunter-Reay and drove him into Bourdais before all three cars slid back off track and into a tire wall.

Pagenaud was out of his car quickly and first informed Bourdais what had happened, then appeared to chastise Hunter-Reay.
Among the drivers who finished the race, Hinchcliffe, a three-time winner in 2013 was the only one to pit only once. The riskiness of that strategy became evident when he ran out of gas shortly after his triumph and couldn't drive back to the pit lane.

Oddly, Helio Castroneves managed to cycle into a second-place finish after pitting three times including once early in the race after front wing damage from contact with the lapped car of Francesco Dracone.

Juan Pablo Montoya, who won the season-opener two weeks ago in St. Petersburg, started on pole after qualifying was rained out Saturday. He led the first 13 laps under green until he pitted for slick tires as a dry line began to form on the track. He finished fifth after pitting only twice.

The race, which had been moved up by nearly an hour because of weather concerns, was able to start at the new scheduled time, albeit on wet weather tires.

The rain had virtually stopped by the time the race began, and by the 10th lap, the rooster tails of spray behind the cars began to lessen as a dry racing line formed around much of the track.

Tony Kanaan who started in third but fell to six after sliding briefly off track in the second turn of the first lap, entered the pits on Lap 11 with three other cars for soft "alternate" slick tires.

The move backfired when he went off track in Turn 10 and had to spin through rain soaked grass to rejoin the track in Turn 12.
By then, he'd fallen out of the top 20.

He managed to work his way back to sixth, ahead of defending series champion Will Power in seventh, Graham Rahall in eighth, Joseff Newgarden in ninth and Luca Filippi in 10th.

Scott Dixon, who turned the fastest lap of the weekend on the 2.74-mile, 13-turn track in a dry practice on Saturday, had to start 15th based on his St. Petersburg finish and wound up 11th.