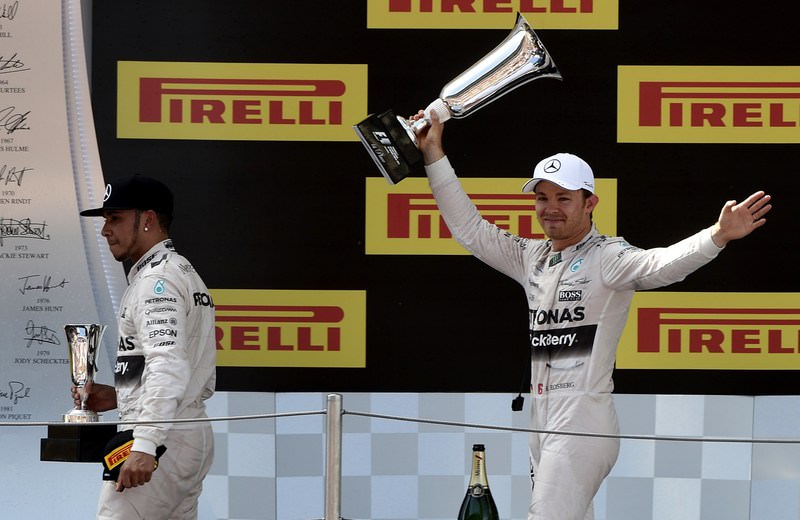 by Daily Sabah with AFP May 10, 2015 12:00 am
Nico Rosberg ended his Mercedes team-mate Lewis Hamilton's winning streak in this year's Formula One drivers' world championship when he drove to a victory in Sunday's Spanish Grand Prix.

The 29-year-old German driver, who had been beaten by Hamilton in all four of this year's 'flyaway' season-opening races, led from the 16th pole position of his career all the way to the chequered flag, his supremacy interrupted only by his pit-stops.

It was his first win since last November's Brazilian Grand Prix and the ninth of his career, and trimmed defending champion Hamilton's lead from 27 points to 20.

Hamilton, who slipped from second to third at the start, fought back with daring and great skill, coupled to a three-stop strategy, to finish behind Rosberg and deliver another one-two for the dominant Mercedes team.

Four-time champion Sebastian Vettel of Germany, who outpaced Hamilton off the grid, came home third for Ferrari ahead of Finns Valtteri Bottas of Williams and Kimi Raikkonen, in the second Ferrari.

Brazilian Felipe Massa was sixth in the second Williams ahead of Australian Daniel Ricciardo of Red Bull and Frenchman Romain Grosjean of Lotus.

It was another day of disappointment for the struggling McLaren Honda team who extended their pointless start to the season. Spaniard Fernando Alonso retired after a brakes failure saw him narrowly avoid colliding with his own pit crew and Briton Jenson Button finished 16th.

In another dramatic pit-lane incident Grosjean also over-shot his pit-stop and sent a mechanic, clinging to the front jack, flying. He was, fortunately, reported not seriously injured.

The race was run on another hot day at the Circuit de Catalunya, with an air temperature of 25 degrees Celsius (77F) and a track temperature of 45 (113F).

As the lights went out, Rosberg made a perfect start to pull clear of the field while Hamilton appeared delayed and was swiftly swallowed up by Vettel who swept past into second.

For a second, it seemed also that Bottas was ahead of the world champion, but Hamilton responded with a robust defensive surge to ensure he lost only one place going into the second corner.

Behind him, Bottas was fourth with Raikkonen, in the second Ferrari, making the biggest gain by jumping to fifth from seventh.

Rosberg revelled in his advantage and his rejuvenated speed. He reeled off fastest laps to open up a 6.6 seconds lead over Vettel by lap 10 with Hamilton a further 1.1 seconds further adrift.

Bottas, fourth, was 4.2 seconds behind Hamilton who reported to his race engineer that "it is impossible to get close" to Vettel in his bid to recover.

For Hamilton, it meant a change of strategy and he was soon told to pit, after 13 laps. "It's hammertime...Box, box." A delay with the left rear tyre hampered him and he rejoined in seventh place, having added three seconds to his stop.

A lap later and Rosberg was in and out for new rubber in just 2.5 seconds, handing the lead to Raikkonen briefly before he, like Vettel, headed into the Ferrari pits. By lap 18, the early order resumed with Rosberg leading Vettel by six seconds and Hamilton back up to third.

As Hamilton revealed his frustrations, Venezuelan Pastor Maldonado's Lotus team removed half of his car's rear wing, damaged in an earlier collision. He fell through the field, but fought back with some determination, passing both McLaren-Hondas on the way.

Alonso, struggling in 14th place, was forced to retire after 27 laps when his brakes failed as he came in for a pit stop. His mechanics dived out of the way as he over-shot by five metres and hit an abandoned jack.

By lap 30, of 66, Rosberg was in easy control, leading Vettel by 8.7sec and Hamilton by 10 as the order settled and Hamilton appeared to ease off ahead of his second stop, after 32 laps, for a set of hard tyres and an aerodynamic adjustment. "Push!" the team instruct him as he chases Raikkonen and Bottas.

Hamilton did just that and, with the help of a dazzling drive through the traffic and a rapid third pit-stop for fresh tyres, managed to overhaul Vettel for second place after the German slowed following his second stop following more drama in the pit lane when Grosjean overshot the Lotus stop area.
Last Update: May 10, 2015 5:39 pm
RELATED TOPICS