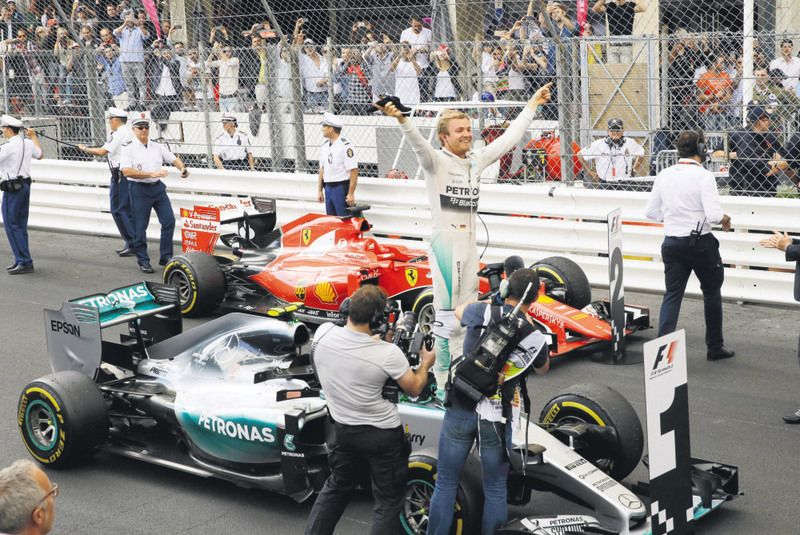 Hamilton looked set to take his 37th career win after leading from the start, until the 17-year-old Verstappen rammed his Toro Rosso into the back of Romain Grosjean as he tried to overtake the Lotus driver.

That meant a safety car had to come out at the start of the 64th lap, and when Hamilton was then called in for a pit stop by Mercedes, he suddenly found himself behind both Rosberg and Ferrari's Sebastian Vettel.

"I can't really express the way I feel at the moment, so I won't even attempt to," a despondent Hamilton said. "I thought Nico had pitted, so I thought the guys behind were pitting. I came in with full confidence that the others had done the same."

When the safety car finally went off track, Hamilton had only a few laps to try and get past Vettel and Rosberg on the most difficult track to overtake on F1.

"It wasn't the easiest of races, but the team has been amazing all year long and we win and lose together," Hamilton said. "I'm sure we'll sit down after this."

Asked how he will respond, a dejected-looking Hamilton said: "Come back to win the next one."

Hamilton's lead has been cut in the past two races and he is now just 10 points ahead of Rosberg, who launched his title bid at a similar stage last season, while Vettel is 28 points behind in third place heading to the Canadian GP in two weeks.

Rosberg was modest in victory.

"I know that I got lucky today, so I'll just enjoy the moment now," the German said. "But I need to work hard because Lewis was a bit stronger today."

Hamilton's Mercedes team has some explaining to do, with head of motorsport Toto Wolff telling broadcaster Sky that it was a mistake to call him into the pits.

"It was a complete misjudgment. I'm just so sorry," Wolff said. "There's nothing to do but apologize."

It was Rosberg's second win of the season following his victory two weeks ago at the Spanish GP, and he became the first driver since Ayrton Senna to win the Monaco race three straight times. The others to do it were Frenchman Alain Prost and Briton Graham Hill.

But Rosberg, who won back-to-back races for the first time, expressed sympathy for his teammate Hamilton.

"He deserved it for sure, I was lucky in the end. I don't even know what happened there," he said. "For sure it is an awful feeling."

He is now right back in championship contention, but the circumstances of his win will likely infuriate Hamilton, who was leading Rosberg by 15 seconds when Verstappen who had never driven on Monaco's sinewy street circuit before tried to pass Grosjean but found no room and went spinning off. He was unharmed.

The team's decision to call Hamilton in for a pit stop clearly backfired, and the Briton angrily snapped over the radio: "Please stop talking to me, please."

Rosberg was 4.4 seconds ahead of four-time F1 champion Vettel, and 6 clear of Hamilton.

As Rosberg and Vettel celebrated warmly with each other, Hamilton took a long while to get out of his car, taking his helmet off slowly and walking to join the other two on the podium with his head down.

Asked if he would respect his team's decisions from now on, Hamilton replied bluntly: "Yes."

He added that it was "a great feeling to lead the race" and that he felt even quicker than usual.

"On the one hand it's good to have that pace, and you live to fight another day," he said.
RELATED TOPICS