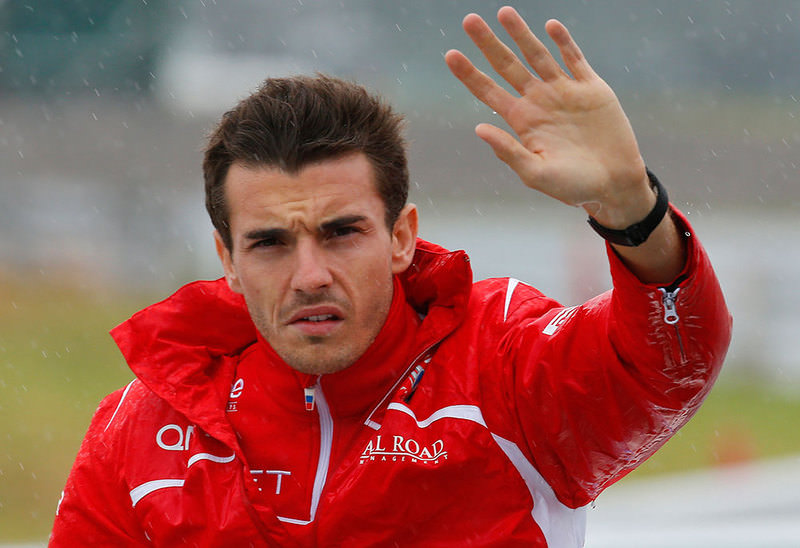 by Jul 18, 2015 12:00 am
French Formula One driver Jules Bianchi died Friday night from head injuries he suffered in a crash at last October's Japanese Grand Prix, after spending nine months in a coma.

Bianchi, who would have been 26 next month, had been fighting for his life under controlled medical conditions in the Centre Hospitalier Universitaire hospital in his home city of Nice, southern France.

He is the first Formula One driver to die from a racing accident since triple world champion Aryton Senna lost his life in 1994.

"Jules fought right to the very end, as he always did, but today his battle came to an end," the Bianchi family said in a statement posted on Facebook in the early hours of Saturday.
"The pain we feel is immense and indescribable."

He suffered a traumatic brain injury when his car careered off the rain-drenched Suzuka circuit during the Japanese Grand Prix on October 5 and smashed into a recovery truck at around 200 kilometers (125 miles) an hour.

Bianchi's death ended a promising career that he hoped would see him join the elite ranks of the Ferrari racing team, something the young driver said he felt "ready" to do next season three days before the race in Japan.

Hopes for Jules Bianchi's recovery had been fading and on Monday, his father Philippe said he was "less optimistic" that Jules would make a full recovery after spending nine months in hospital with no signs of "significant progress".

Marussia, now called Manor F1, said in a post on Twitter: "We are devastated to lose Jules after such a hard-fought battle. It was a privilege to have him race for our team."

Bianchi's crash, which came as Formula One legend Michael Schumacher was battling back from a horrific ski accident, added to anxiety surrounding the high-octane motor racing circus.

While yellow warning flags were up, racing was still intense when Bianchi crashed and experts said the wet track, his tires and his speed could all have been to blame for the accident.

Questions have also been raised about whether the marshals should have halted the race after Adrian Sutil's Sauber came off the track on the previous lap.

Born in Nice in 1989 to Italian parents, Bianchi had racing in his genes. His grandfather Mauro had been a well-known Formula Three and endurance driver in the 1960s.

His father Philippe for years managed a karting track near the Paul Ricard circuit near Marseille, in southern France, where Jules made his debut as a race car driver.

But his death also recalled another tragic piece of family history: his grand-uncle Lucien, who drove 17 grands prix, was also killed in a crash while racing in 1969 at the age of 34.

The Bianchi family in their Saturday statement thanked "everyone who has demonstrated their affection for him over these past months, which gave us great strength and helped us deal with such difficult times" and asked for privacy.