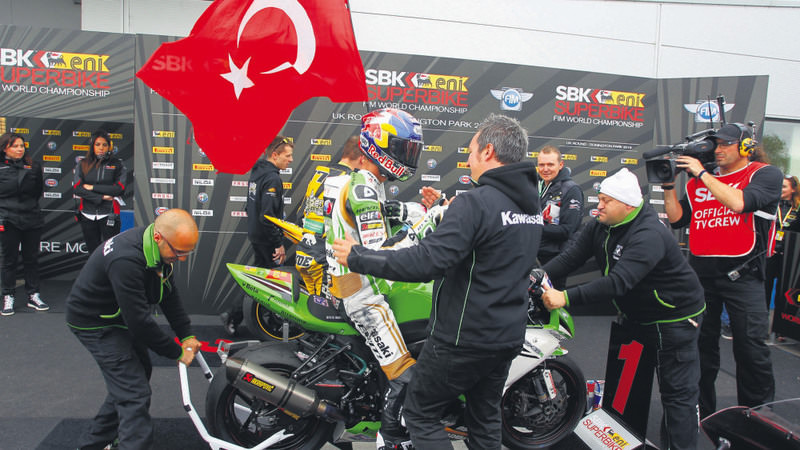 On the face of it, Kenan Sofuoğlu is by far the most successful rider to have ever competed in the Supersport World Championship. Not only does he hold records in practically every area but he has now become a four-time World Champion, having already been the only rider to enjoy the honor three times. However, in 2015 the 31-year-old has faced an immense struggle off the track as well as on it.

Hailing from the Turkish town of Akyazı (whose postcode is 54 and the number with which Sofuoğlu has always raced), he began his professional career in 2003, missing out on the IDM Supersport title by just ten points. Also that year, he made his debut in World Supersport, competing in the races of Valencia, Oschersleben and Magny-Cours. Valencia was also the scene of his debut pole position, in 2007, but the first win came at Assen in 2006 as he beat his nearest opponent by four and a half seconds.

His first two titles came with Hannspree Ten Kate Honda, in 2007 and 2010 respectively. He achieved the crown again in 2012, this time with Lorenzini Kawasaki. During this phase Sofuoğlu also starred in the Moto2 World Championship, in 2010 and 2011. In the second of the two years, he finished on the podium at Assen, beaten only by future MotoGP World Champion Marc Marquez.

Sofuoğlu's story of 2015 is one of triumph mixed with tragedy. Following a difficult period with MAHI Racing Team India last year, his Kawasaki Puccetti Racing partnership was hoped to deliver the title. Phillip Island in February presented a difficult start, as he was forced to recover to sixth place after an incident with Gino Rea, but there was a pole position and return to the podium in Thailand as he finished second behind first-time winner Ratthapark Wilairot. Then came a pivotal run of four straight wins at Aragon, Assen, Imola and Donington, but reading off results alone tells barely half of the story; not least as title rival Jules Cluzel's MV Agusta lost a potential 50 points due to engine failures in both the MotorLand and Buriram rounds.

He dedicated the fourth title to his late son

Sofuoğlu said after the race: "We left behind a very difficult season. The absence of a very tough rival, Jules Cluzel, who was injured in the 10th stage of the race, made things easier for me. I'm happy for my family and my team. I wanted to win the race in memory of my son Hamza who passed away last July."

However, it is events away from the race track that have most characterized this year for the Sofuoğlu family. Ahead of Imola, Manuel Puccetti's team announced that Hamza Sofuoğlu, newly-born son of Kenan and wife Julia, was fighting for his life in a Turkish hospital. Against all odds, Kenan fought on to win the race in Italy before hurriedly returning home. Following his four consecutive victories, there was second in Portugal after a second massive scrap with Cluzel (the first having come at Assen), while 11th at Misano was the blot on the copybook as Sofuoğlu was pushed into a mistake by Lorenzo Zanetti while defending third place on the final lap.

By the time the paddock regrouped at Sepang, the fraternity had received the tragic news that baby Hamza had succumbed to his illness. In the Malaysian race, channeling emotion into determination in one of sport's most remarkable displays of courage, Sofuoğlu finished fourth behind PJ Jacobsen, Cluzel and Zanetti.

Jerez came around in mid-September. Sofuoğlu's championship lead - as great as 45 points after Donington - was now down to just 13. Then came the next twist, as Cluzel was harshly ruled out of the championship chase following a heavy crash in Friday practice. "I am very sorry for Jules," Sofuoğlu was quick to mention. "He also deserved to win the title. Maybe we have been a little lucky, but I have also had some very difficult times this year. Life can give us some very hard moments and this is a very hard moment for him. I'm very sorry for him and his team."

Sofuoğlu's title was sewn up with first place at Magny-Cours on Oct. 4, historically winning the World Supersport crown for the fourth time as only challenger Jacobsen ended proceedings in second position.