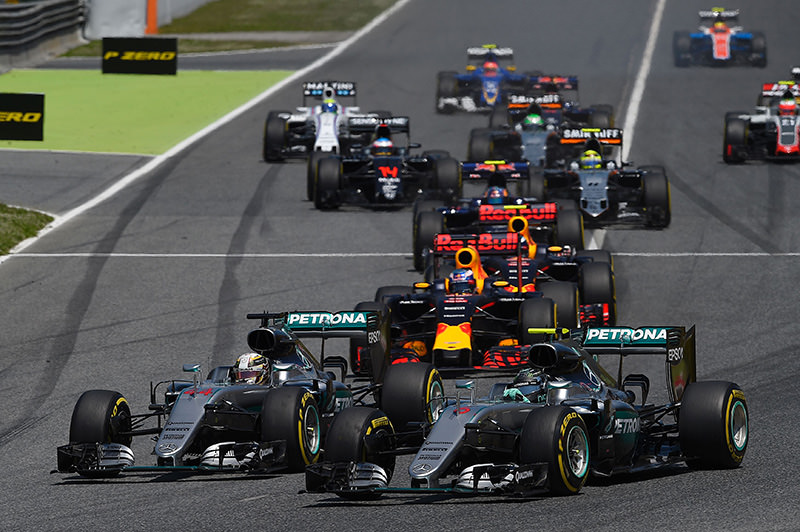 Defending three-time champion Hamilton took the lead from pole position, but was passed at Turn One by the German who took the initiative with a sweeping pass round the outside.

Hamilton then gained speed on his run from Turn Three and attempted to pass inside Rosberg at Turn Four where, in defense of his position, the German driver 'closed the door' and forced his team-mate onto the grass.

Hamilton then went into a spin and as his car slewed back across the circuit he clipped Rosberg, taking the pair of them off into a gravel trap.

Both men were unhurt and climbed from their cars to learn quickly that the stewards would investigate the accident after the race.

A Safety Car was deployed immediately and the field ran behind it for three laps before racing resumed, with Australian Daniel Ricciardo of Red Bull in the lead ahead of his team-mate Dutch teenager Max Verstappen.

The collision divided opinion in the paddock, but left Hamilton distraught with his helmeted head in his hands in the knowledge that he had thrown away a chance of claiming his first victory in eight races.

The accident was witnessed by all of the Mercedes team and company's senior directors, who had arrived for the race.

It ended Rosberg's run of four wins this season and seven in all, dating back to last year, but did nothing for Hamilton's effort to close the 43-points lead that the German retained ahead of him.

It also revived memories of their acrimonious scraps in the last two years during which Hamilton has won two world titles and previous opening lap collisions involving championship contenders and team-mates Alain Prost and Ayrton Senna of McLaren in the past.

"It was stupid, we should have won this race," said Mercedes boss Niki Lauda.

"Lewis was too aggressive and I have to speak to him..."

Both men returned to the paddock with their helmets on and refused to speak to reporters.