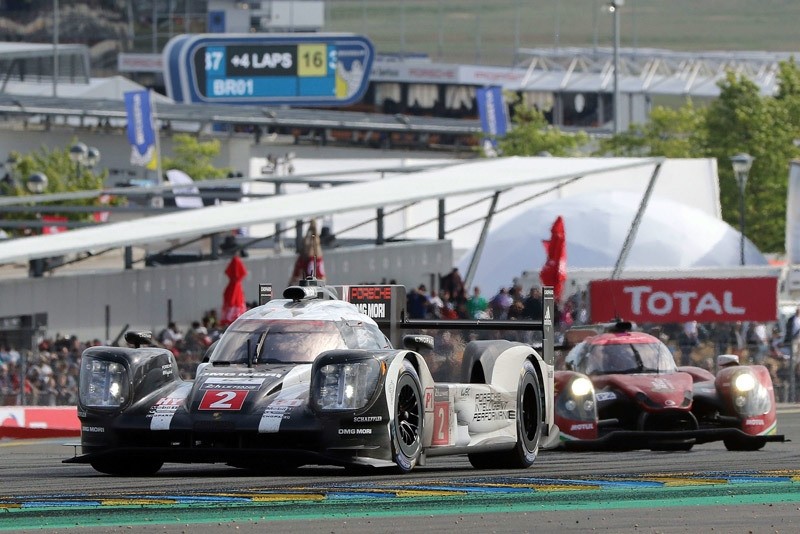 Porsche snatched victory in one of the most dramatic finishes in Le Mans 24 Hour Race history after Toyota suffered an agonising power failure with just minutes left on Sunday.

Neel Jani powered the Porsche 919 Hybrid over the line, to elation and tears of joy in their garage, after Kazuki Nakajima's TS050 stuttered to a halt when looking nailed-on to win the endurance race for the Japanese team for the first time in three decades of trying.

Jani, Romain Dumas and Marc Lieb, drivers of the Porsche number two car, celebrated wildly in front of a crowd that swelled to 263,500 for the 84th edition of the gruelling showpiece, which began on Saturday under driving rain and behind a safety car.

The Toyota garage looked on aghast as Nakajima's car suddenly began slowing with only five minutes of the 24 hours to go.

He had been as much as 90 seconds ahead at one point, but suddenly it all went wrong and he began to rapidly lose pace, allowing Jani to close fast.

With just over three minutes to go Nakajima came to a stop on the straight as Jani sped past to victory. The Toyota was ranked as declassified, a humiliating culmination to a day-night of racing.

"I'm ready to cry," Nakajima said over the radio as he laboured home.

"Heartbroken," was the simple tweet from the devastated Toyota team.

Toyota's number six car with Stephane Sarrazin at the wheel crossed the line in second with an Audi third.

"We know that Le Mans can be cruel. But what happened to Toyota was incredible!"

Among the stunned crowd was Brad Pitt, part of the usual colourful cast of professional drivers and Hollywood royalty who turned out to see one of motor racing's A-list events.

Pitt flagged the race off 24 hours earlier, when heavy downpours ensured a soaking start to the occasion and saw the first seven laps take place behind the safety car as torrential rain lashed the track and the 60 cars on the grid.

The drenched crowd were kept on their toes by over 30 changes of lead during the night and several safety car appearances.

By the closing stages it became a straight fight between Porsche and Toyota, with the two playing cat and mouse for the lead.

By the time the cars crossed the line -- under altogether more forgiving weather -- they had covered a similar distance to a round trip from Le Mans to Moscow.