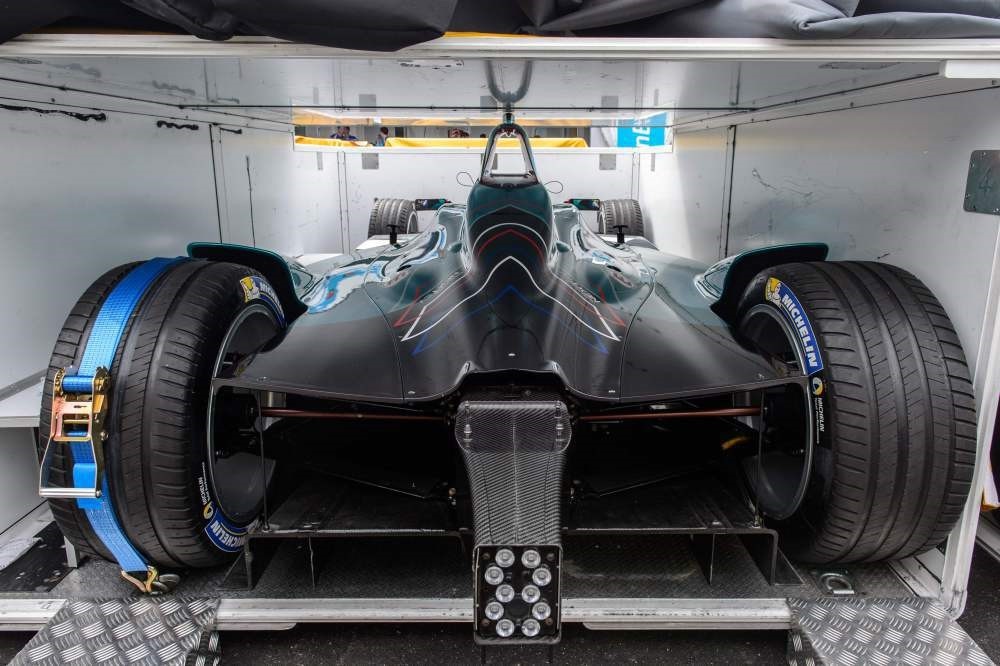 A NextEV car is seen in a transport container in the pit lane of the Formula Etrack in Hong Kong.
by Oct 08, 2016 12:00 am
Indian billionaire Anand Mahindra says Formula E's futuristic, high-pitched "spaceships" are the future of motor racing, as he sees the sport evolving away from F1 "dinosaurs."

Ten teams, including India's Mahindra Racing, will line up on the Formula E grid when the third season of the environmentally friendly championship gets under way in Hong Kong on Sunday.

The fully electric motorsport debuted in 2014 and is seen as a greener alternative to Formula One, although petrol-heads say lower speeds and fewer decibels mean it lacks the same excitement. "If you've ever been to one you'll know it's not as boring as people think because there are no sounds," Mahindra, the chairman of the Mumbai-based Mahindra Group, told AFP. "It's actually like being in a 'Star Wars' movie because there's a whining electric sound. You're essentially in a spaceship race," the 61-year-old added during an interview at his company's headquarters.

Critics say maximum speeds of 150 mph - reaching about 80 decibel levels - are a turn-off compared to F1 cars, which regularly top 200 mph and register almost 130 decibels. But Mahindra believes the world's first all-electric racing series is the future and could one day be as popular as F1. "I certainly think it can. If you look at the traction it has got in its short life it's pretty remarkable already. It's gone way beyond our expectations," he said. "Formula One, that's 'Jurassic Park.' You want to move from riding a dinosaur to riding the Starship Enterprise. That's what the change is," Mahindra added, referring to the "Star Trek" spacecraft.

The forthcoming season will see the teams, each with two drivers, racing on 12 temporary city-center circuits. Germany's Nick Heidfeld and Swede Felix Rosenqvist will drive for Mahindra Racing.

After Hong Kong the series goes to Marrakech in Morocco and then Buenos Aires, Argentina. It culminates in Montreal, Canada, in July next year. Mahindra Racing is part of Mahindra Group, a conglomerate worth around $17.8 billion that is involved in everything from cars and tractors to information technology. It also manufactures electric vehicles through its company Mahindra Reva.
RELATED TOPICS