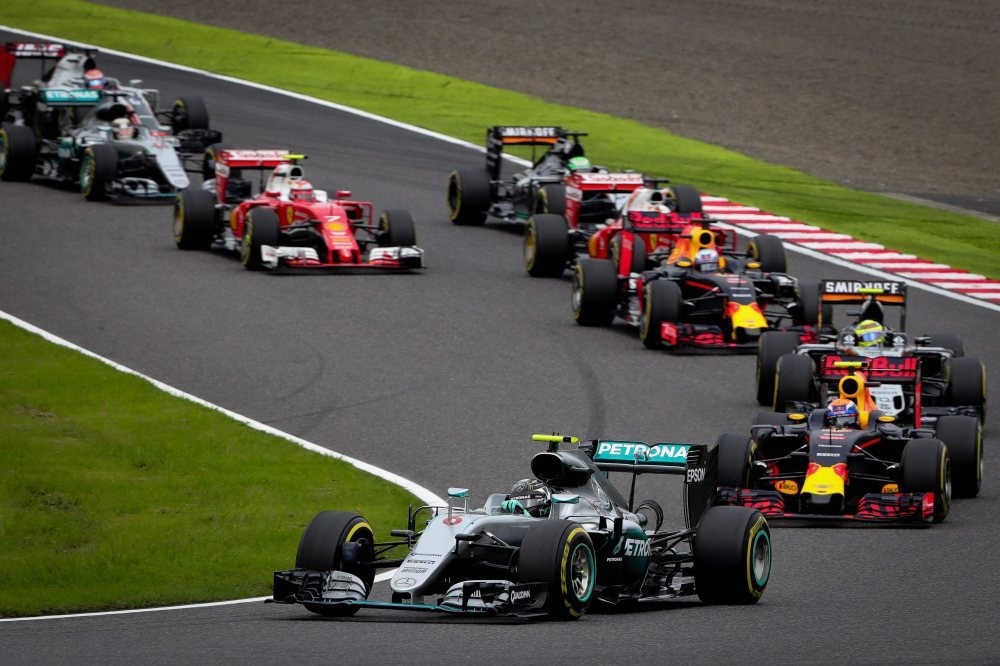 Nico Rosberg won the Japanese Grand Prix to increase his Formula One championship lead to 33 points over his Mercedes team-mate Lewis Hamilton, who had to settle for third after a terrible start

Mercedes driver Nico Rosberg capitalized on a slow start by teammate Lewis Hamilton to win the Japanese Grand Prix yesterday and widen his lead in the Formula One drivers' championship. Rosberg, who started from pole position, controlled the race throughout and finished 4.9 seconds ahead of Red Bull driver Max Verstappen, who held off Hamilton in close racing over the final few laps.

"The start went really well," Rosberg said. "Everything went well, and then it was just controlling the pits and the gaps to Max in the race. It was a perfect weekend to win on this legendary track."

"It's better that way than the other way round but it's still Lewis that's my teammate, so I always need to reckon with him," Rosberg said.

"He's going to be going for it in the last four races. There's still a long way to go."

The result clinched the constructors' championship for Mercedes for the third year running. Hamilton, who started second, made another of the poor starts which has been among Mercedes few weak points this season, and dropped back to eighth on the opening lap. The defending world champion worked his way through the field well. Desperately needing as many points as possible in the championship race, Hamilton attempted a bold passing move on Verstappen on the penultimate lap.

Exiting the Spoon curve just 0.5 seconds back, the Briton tried a move into the chicane but Verstappen blocked his path, and Hamilton was forced up an escape road. Hamilton complained over his team radio that the 19-year-old Dutchman had made his move too late under braking.

"Lewis was pushing really hard," Verstappen said. "He is fighting for the world championship so you are not going to do anything crazy things of course."

Hamilton said his poor start was down to wheel spin, rather than any preoccupation with the damp patch in front of his grid slot due to overnight rain. I was just working my way up from there - it was tricky but I did the best I could," Hamilton said. "I'm happy with clawing it back and getting some points, it's good."

It was Rosberg's ninth victory of the season and 23rd in F1, moving the German driver into a tie for 12th place on the all-time list with Nelson Piquet. Rosberg started the previous two races at Suzuka from pole position only to be overtaken by Hamilton. Ferrari driver Sebastian Vettel had an opportunity to pass Hamilton immediately after the second round of pitstops but couldn't do it and finished fourth ahead of teammate Kimi Raikkonen. Daniel Ricciardo of Red Bull, who won the previous race in Malaysia, was sixth.

The Force India pair Sergio Perez and Nico Hulkenberg finished seventh and eighth, with the team eking out a 10-point gap over Williams whose drivers Felipe Massa and Valtteri Bottas finished ninth and 10th on a one-stop strategy. Every driver finished the race, only the seventh time in 952 world championship races that has happened.
RELATED TOPICS