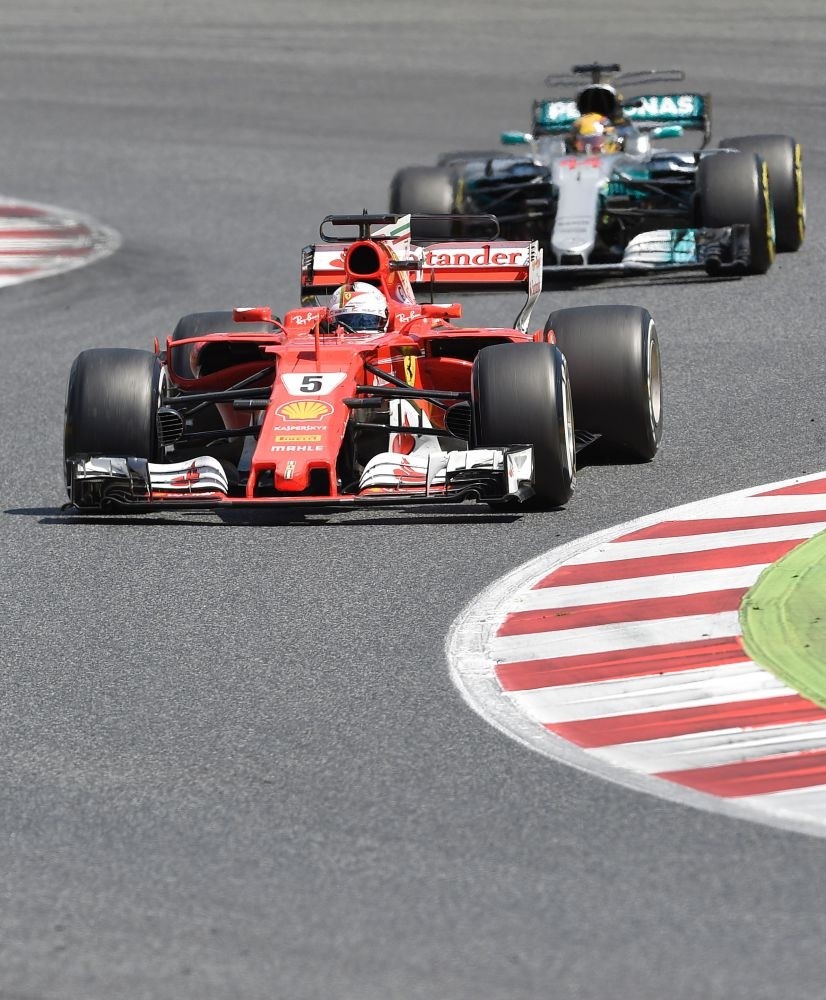 The Monaco Grand Prix is the most prestigious race on the Formula One calendar, and this year's race has added spice from wider and faster cars and a thrilling title duel between Sebastian Vettel and Lewis Hamilton

The fierce but respectful Formula One title duel between Lewis Hamilton and Sebastian Vettel undergoes a serious test on the narrow and winding roads at the Monte Carlo Grand Prix on Sunday.

The two have battled it out for the top in the first five races of the season, with Vettel's championship lead trimmed to six points two weeks ago in Spain where the Ferrari driver failed to pass Mercedes man Hamilton for victory.

Now comes Monaco, the most prestigious race on the calendar, with celebrities galore descending on the principality to be entertained and witness the action on the 3.337-kilometer (2.073- mile) street course where overtaking is all but impossible.

Vettel won the famous race in 2011 for Red Bull while Hamilton triumphed in 2008 for McLaren and again last year.

Now the Briton seeks a fifth straight top spot for Mercedes, with retired Nico Rosberg winning 2013-2015, but speaks of an even bigger challenge because the aerodynamic changes the cars have undergone.

"It's a circuit which is all about mental strength. You need to be sharp and clear," the three-time world champion said. "We have new cars this weekend which are wider and faster, so that's going to be a massive challenge. In trying to push the car as close as you can to the limit, it'll be a real test of your awareness of where the car is. I'm sure there will be some brushing of the barriers."Teammate Valtteri Bottas agreed, saying "you really need to be on top of your game," and Mercedes motorsport Chief Toto Wolff added "you need to get everything exactly right if you want to perform to your maximum around those streets."

Looking at the duel with Ferrari, after three years of being unchallenged at the top, Wolff said that "every weekend will push us to the limit."

"This is the new reality of Formula One in 2017. The last three years were extraordinary. But this season I have re-discovered why I love the sport. I love the intense competition," he said. "This competition means that you won't be winning easily, but that you'll have a fierce fight on your hands. Because of that, the feeling is even greater when you manage to come out on top, as we did in Spain."

Vettel will meanwhile aim to end Ferrari's Monte Carlo rot as the Scuderia has not won there in 16 years since Michael Schumacher's success in 2001.

"We were in the fight, the team is in great form, we need to improve because we want to be ahead of them [Mercedes]," he said.

As usual on Monaco, the first two practice sessions are today and not on Friday as at all other races. Qualifying is Saturday and the 78-lap race Sunday.

The GP is also special as many drivers are based in Monaco, including former world champion Jenson Button who returns to action for one race at McLaren to replace Fernando Alonso who is competing for the marque in the Indy500 in Indianapolis.

"It feels slightly surreal to be back in the cockpit for the Monaco Grand Prix," the 2009 race winner Button said.

"I'm looking forward to stepping back behind the wheel for one of the most crazy, unpredictable and exciting races of the year."