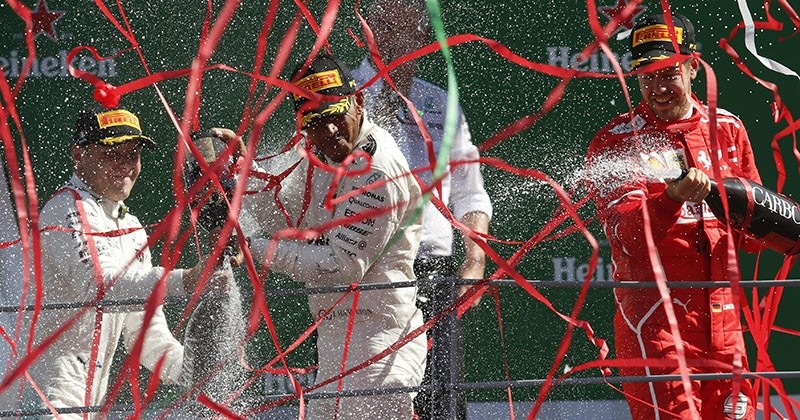 Lewis Hamilton won the Italian Grand Prix virtually unchallenged from pole position Sunday and moved ahead of Sebastian Vettel to take the lead in the drivers' standings.

Hamilton finished nearly five seconds ahead of Mercedes teammate Valtteri Bottas while Vettel came third in his Ferrari, more than half a minute behind.

Hamilton now has 238 points, three more than Vettel with seven races remaining in what has developed into a riveting Formula One season.

The 32-year-old Briton, seeking his fourth world title, made a perfect start from his record 69th pole position to lead Bottas home for his sixth win this year, his third at Monza and the 59th of his career.

Having won in Belgium last Sunday, Hamilton also became the first driver to score back-to-back victories this year. It was Mercedes' third one-two this year and the team's 39th overall.

After getting out of his car, Hamilton first greeted Bottas then jumped into a crowd of Mercedes team members. The British driver was met with a mix of cheers and boos during Monza's famed podium celebration, with a sea of red-clad Ferrari fans invading the track.

"You know what? I love it here in Italy and I love the passion of the Ferrari fans," Hamilton said on the podium. "We don't get to see this energy anywhere else, apart from maybe Silverstone."

The Ferrari supporters were hoping for more on a weekend celebrating the automaker's 70th anniversary.

"Mercedes power is definitely better than Ferrari power," Hamilton said. "So it worked well this weekend."

Bottas also praised Mercedes' teamwork. "The car was so strong - it was amazing how quick we were and it was a pure joy to drive. A perfect result! No drama," he said.

After a brilliant start to the season, Vettel has now won just one of the last seven races.

Red Bull's Daniel Ricciardo finished fourth, having climbed through the field after starting 16th with a grid penalty.

Kimi Raikkonen crossed fifth — exactly where he started — in the other Ferrari.

As drivers gathered at the front of the grid for the national anthem ahead of the race, air force jets flew low overhead emitting a trail of smoke in the green, white and red of the Italian flag.

Hamilton got off to a clean start and Bottas quickly moved up from fourth to put Mercedes 1-2 after only four laps.

Raikkonen battled with Bottas early on but then went off course and had to slalom through the barriers.

"I have damage on the rear of the car," Raikkonen said via team radio.

But Ferrari told the Finn they couldn't see anything.

"I don't know to fix it," Raikkonen replied.

Meanwhile, Vettel slipstreamed past Esteban Ocon down the main straight to move into third but he too then reported problems with the rear of his car and kept dropping further and further behind the Mercedes cars.

Hamilton's only hiccup came when he skidded onto the edge of the gravel briefly midway through the race. Otherwise, he and Bottas were gaining half a second per lap on the Ferraris.

Fly-away races make up the rest of the F1 calendar, starting with the Singapore GP in two weeks.

Driver and Constructor Standings after the Formula One Italian Grand Prix at Autodromo di Monza: