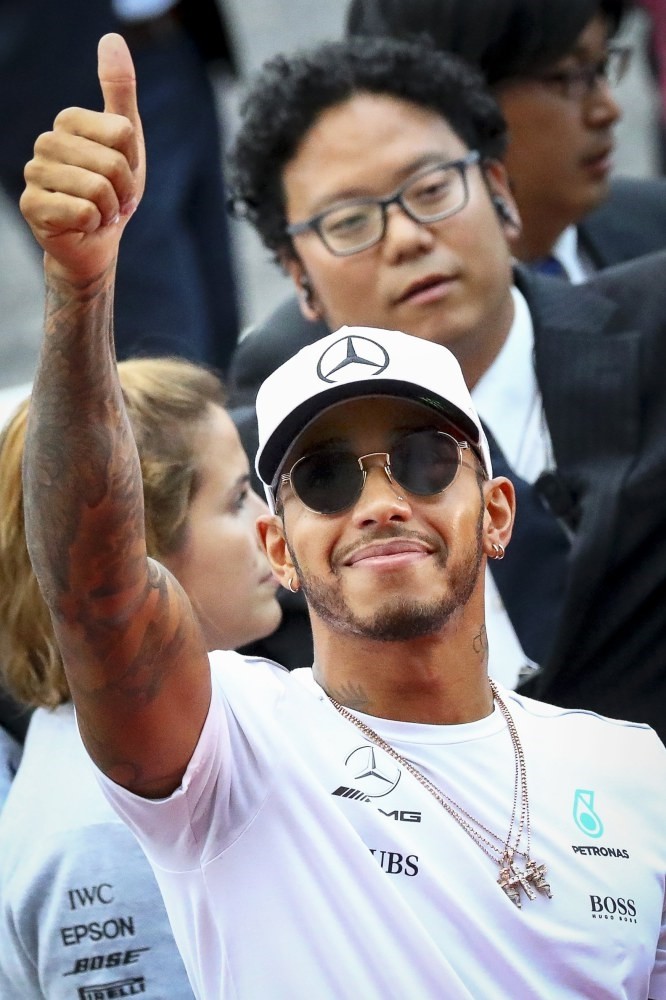 Formula One championship leader Lewis Hamilton clocked the fastest lap in a rain-hit second practice session for the Japanese Grand Prix on Friday, when only five drivers set a timed lap. After a lengthy delay, the Mercedes driver was quickest in the afternoon practice with a lap of 1 minute, 48.719 seconds, .799 seconds ahead of Force India rival Esteban Ocon. Despite Hamilton's victory in the wet in Singapore and second-place finish in Sepang, Mercedes has recently struggled to match the pace of rivals Ferrari and Red Bull.

"It's been an interesting day," Hamilton said. "The car is feeling much better than it was in Malaysia. I'm glad that we had the dry session for FP1. In FP2, there was a lot of rain, but it felt really important to go out and assess the track and see how the car was feeling as the car was not good in the wet in Malaysia." Hamilton switched to the team's new aerodynamic package for Friday's practice and, after finishing second behind Ferrari driver Sebastian Vettel in a dry first practice, he said his car felt competitive again.

"The car feels back to normal, so I'm ready to race," Hamilton said. Ocon's teammate, Sergio Perez, and the Williams duo of Felipe Massa and Lance Stroll were the only other drivers to get in a timed lap in the abbreviated afternoon session. With five races remaining, Hamilton leads Vettel by 34 points in the driver's championship. Hamilton has won twice before in Suzuka, in 2014 and 2015, and was runner-up to former Mercedes teammate Nico Rosberg in last year's race. A win in Suzuka would move Hamilton a step closer to a third F1 title in four years with Mercedes and his fourth overall. Vettel, who had a new engine for the previous race in Malaysia, is a four-time winner in Japan. Clear skies are expected for Sunday's race.