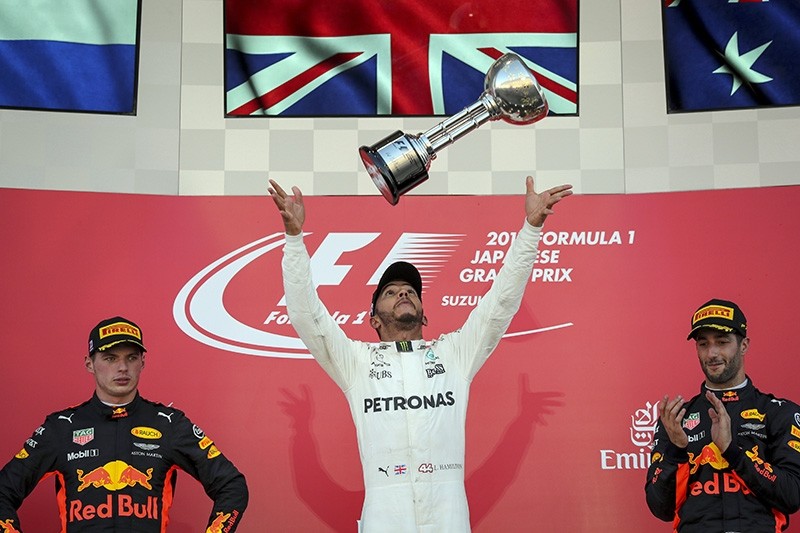 Lewis Hamilton romped to victory at the Japanese Grand Prix on Sunday to close in on a fourth world title after Sebastian Vettel retired with engine failure four laps in.

The Briton dominated from pole, steering his Mercedes to a crushing eighth win of the year, stretching his Formula One championship lead over Vettel to 59 points with just 100 left to play for.

"Honestly I could only have dreamed of having this kind of gap," said Hamilton after holding off a late charge from Max Verstappen in Suzuka and finishing 1.2 seconds ahead of the Dutch driver.

"The team has done a phenomenal job, they're just so meticulous so a big thank you to the guys."

Hamilton coasted to an eighth season victory and 61st overall and he can now wrap up a fourth world title at the next race in Austin, Texas, on October 22, the place where he clinched his so far last title in 2015 and has won the last three races.

The Red Bulls of Verstappen -- who stunned Hamilton to win in Malaysia last week -- and Daniel Ricciardo secured a double podium for the second successive race.

As Hamilton powered to his fourth victory in Japan, Vettel's title hopes suffered a potentially fatal blow with four races left after a nightmare start from the front row.

Vettel led the championship until a month ago but has since gone out in a first-lap crash in Singapore along with Verstappen and Kimi Raikkonen in the other Ferrari.

Ferrari mechanics worked frantically on the grid to fix a spark plug issue before lights out and Vettel was quickly complaining of a lack of power.

The German plummeted to sixth on the first lap before being told to retire the car as Hamilton roared away into the distance.

"It's just a pity in the two races with the reliability issues," said Vettel, who led the championship just six weeks ago.

"But now it's important to get some rest and give my all for the last four races and see what happens."

The warmer conditions were supposed to favor the Ferraris but Hamilton ruthlessly took a stranglehold on the 53-lap race, backing up his record-breaking pole performance on Saturday.

With Vettel out of the race, it quickly became a showdown between Hamilton and Max Verstappen. Hamilton built up a four-second lead over the Red Bull driver through the first 15 laps and made his only pit stop on the 23rd lap.

Verstappen pitted a lap earlier than Hamilton, then produced some good laps to cut the lead to 1.7 seconds midway through the race.

Verstappen closed to within a second at the start of the final lap but traffic allowed Hamilton to escape once more and seal the narrow win.

Also in the points, Sergio Perez finished seventh for Force India ahead of the two Haas cars of Kevin Magnussen and Romain Grosjean with Felipe Massa holding off Fernando Alonso's McLaren to take 10th for Williams.

Sauber driver Marcus Ericsson also retired early when he ran across the gravel and dived nose-first into the barriers.

Carlos Sainz lost control of his Toro Rosso and spun across the gravel into the wall on the outside and retired after the second lap.

Mercedes also increased its lead in the Constructors' standings to 145 points over Ferrari. Red Bull is in third place with 303 points.