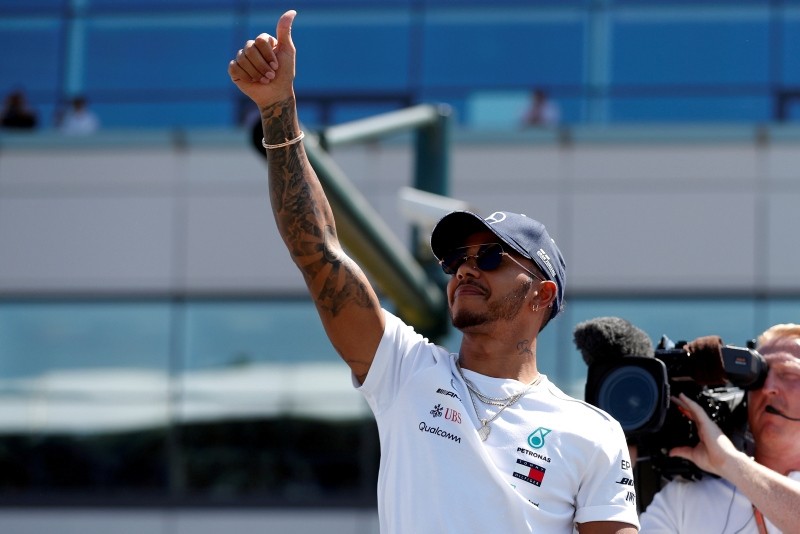 Mercedes' Lewis Hamilton before the race. (REUTERS Photo)
by Compiled from Wire Services Mar 14, 2019 10:40 am

Lewis Hamilton signed a two-year contract extension with Mercedes on Thursday that will keep the four-time world champion with the team until the end of the 2020 season.

"Mercedes-AMG Petronas Motorsport and Lewis Hamilton today announced the agreement of a two-year contract extension for the 2019 and 2020 Formula One seasons," a statement from the team read.

"It's good to put pen to paper, announce it, and then get on with business as usual," Hamilton said. "We are on the same wavelength both on and off track, and I am looking forward to winning more."

Mercedes has won the past four drivers' and constructors' championships — with Hamilton clinching three of them — but this season is testing the Silver Arrows team.

Hamilton trails Ferrari driver Sebastian Vettel by eight points, and Mercedes is 20 points behind Ferrari in the constructors' championship.

The 33-year-old Hamilton has won 65 races — 44 with Mercedes — and secured 124 career podiums. He is the F1 record holder with 76 pole positions. His number of wins is second only to seven-time F1 champion Michael Schumacher's tally of 91.

"I'm very confident that Mercedes is the right place to be over the coming years," Hamilton said. "Although we have enjoyed so much success together since 2013, Mercedes is hungrier than ever. The competitive passion that burns bright inside me is shared by every single member of this group."

Hamilton joined Mercedes in 2013, after six seasons with McLaren. The British driver won his first F1 title with McLaren, in 2008, at the age of 23.

Mercedes head of motorsport Toto Wolff spoke of his relief at getting Hamilton to commit, amid speculation this season Hamilton might even quit driving in order to further his ambitions in fashion and music.

"There has understandably been a lot of interest and speculation around the whole process, so it's good to put all of that to rest and get this thing announced," Wolff said. "We signed the final documents this week and didn't want to keep people waiting any longer."

Wolff hailed Hamilton as one of F1's all-time greats, and praised his professionalism and work ethic above all.

"What I enjoy most about working with him is getting to know the man inside the racing helmet," Wolff said. "His relentless drive for self-improvement, his emotional intelligence as a team member and his loyalty to those around him."

Hamilton is vying with Vettel to become only the third F1 driver to win five titles. The other is Juan Manuel Fangio.

Hamilton's new contract goes to the end of the Concorde Agreement, with a new set of rules and regulations for F1 set for 2021 onward.

The biggest changes in 2021 will center on engines, budget caps, and wealth distribution, in order to create a more level playing field.

They have yet to be approved, so Hamilton's deal protectively gives him the option of deciding whether he wants to keep racing in 2021.