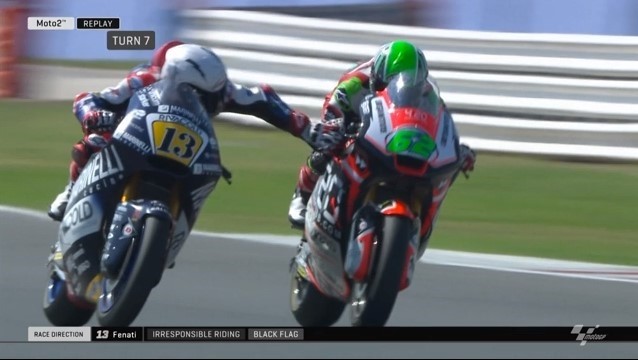 The team said in a statement they were severing Fenati's contract "for his unsporting, dangerous and damaging conduct".

Both riders were competing at high speed around the Misano track on Sunday when 22-year-old Fenati, riding a Kalex, leaned over and pressed Manzi's brake lever. Manzi briefly lost his balance before regaining control of his Suter bike.

"The Marinelli Snipers Team shall terminate the contract with the rider Romano Fenati, from now on, for his unsporting, dangerous and damaging conduct for the image of all," a statement read.

"With extreme regret, we have to note that his irresponsible act endangered the life of another rider and can't be apologized for in any way.

"The rider, from this moment, will not participate in any more races with the Marinelli Snipers team.

"The team, Marinelli Cucine, Rivacold and all the other sponsors and the people that always supported him, apologized to all the World Championship fans."

Fenati's actions followed Manzi's attempt to overtake him a few laps earlier. The pair had made contact as Manzi overtook on the inside, with both riders running off the track, losing several positions and dropping out of the points.

"I don't know how I managed to stay up," said Manzi.

"It's difficult to forgive a gesture like that, where an opponent tries to kill a rival at over 200 kilometers per hour."

Fenati -- a Moto2 rookie this year aboard a Marinelli Snipers-run Kalex bike -- was black-flagged and disqualified after 23 laps for "irresponsible riding."

Manzi was also penalized and will start six places back on the grid for the next Grand Prix, for forcing Fenati off the track, shortly before the latter's outburst, when both were fighting for 12th position.

The FIM MotoGP stewards panel later banned Fenati from the next two races in Aragon, Spain on September 23 and Thailand on October 7 for having "deliberately attempted to cause danger to another rider."

Fenati on Monday apologized for his "impulsive" behavior after being sacked by his Marinelli Snipers Team for grabbing rival Stefano Manzi's brake while riding at a speed of over 200kph during the San Marino motorcycling Grand Prix.

"I apologise to the world of sport. This morning, with a lucid mind, I wish it had just been a bad dream," Fenati said in a statement.

"I made a disgraceful gesture, I was not a man! A man would have finished the race and then he would have gone to race direction to try and get some justice for the preceding incident.

"I shouldn't have reacted to provocation," continued Fenati.

"A horrible image of me and of the sport has come out. I'm not like that, people who know me well know that!

"In my career, I've always been a fair rider. Last year I was one of the few who was not penalized, I have never put someone else's life in jeopardy, on the contrary, I have always maintained that there are riders on the track who are dangerous because of their riding style."

He added: "It's true, unfortunately, I have an impulsive character, but my intention was certainly not to hurt a rider like me, rather I wanted to make him understand that what he was doing was dangerous and how I could also have done something similar to what he did to me!

"I just want to apologise to everyone. Now I will have time to reflect and clear my head."

It is not the first time the Italian rider has been embroiled in controversy. He was forced to apologize for kicking out at Finnish rider Niklas Ajo during the Moto3 warm-up at the 2015 Argentinian Grand Prix.

He was dropped for disciplinary reasons during the 2016 season by the Sky Racing Team VR46, owned by Italian motorcycling star Valentino Rossi.

Fenati is 19th in the Moto2 standings with 14 points. He had been set to leave his current team at the end of the year for Manzi's Forward Racing team, which will run in partnership with Italian manufacturer MV Agusta.

But that deal is now also in serious doubt, as MV Agusta president Giovanni Castiglioni vowed to block his arrival.

"This has been the worst and saddest thing I have ever seen in a bike race," Castiglioni wrote in a social media post.

"True sportsmen would never act this way. If I would be (series promoter) Dorna, I would ban him from world racing."

British rider Cal Crutchlow, who finished third in Sunday's MotoGP race, told reporters Fenati should have been banned for life.

"He should never compete on a motorcycle again," said the LCR Honda rider. "He should have walked back to the garage and his team should have just kicked him straight out the back.

"You can't do this to another motorcycle racer. We are risking our lives enough."

Moto2, previously the 250cc category, is a feeder series one rung below the main MotoGP class.

The MV Agusta project is in partnership with Forward Racing, whose rider Manzi was on the receiving end of Fenati's actions.