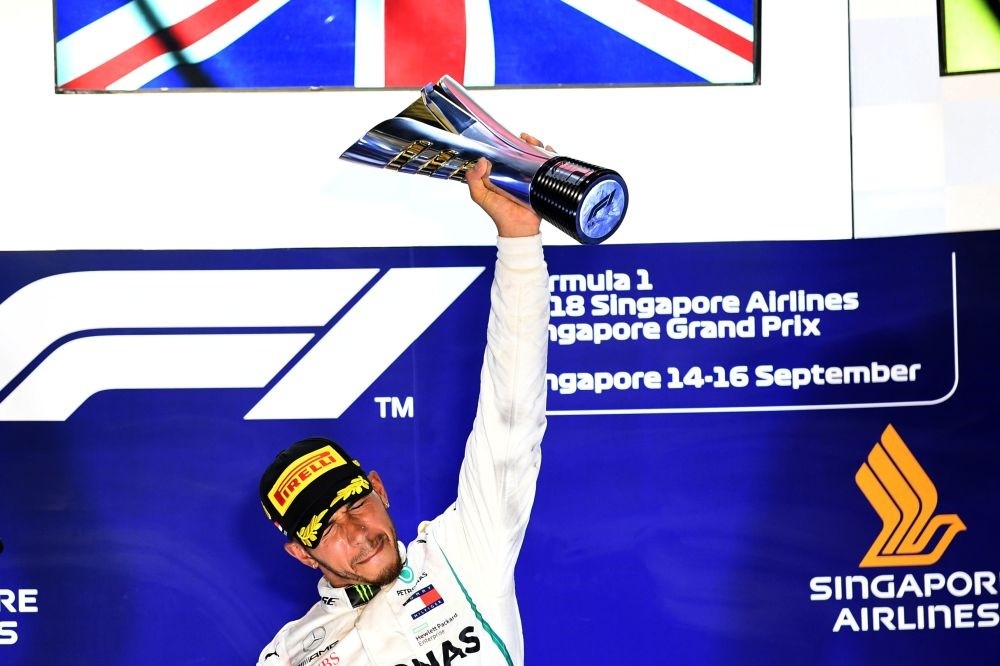 Mercedes' British driver Lewis Hamilton holds up the trophy on the podium after winning the Singapore Formula One Grand Prix at the Marina Bay Street Circuit in Singapore on Sept. 16.
by Associated Press Sep 18, 2018 12:00 am

Lewis Hamilton sounds unsure of just one thing: whether Ferrari can bounce back after he dealt another crushing blow to Sebastian Vettel's title hopes. Hamilton was imperious at the Singapore Grand Prix, securing one of the best pole positions of his Formula One career with an astonishing drive in qualifying on Saturday and then controlling Sunday's race perfectly. It all went so smoothly for Mercedes as Hamilton moved 40 points ahead of Vettel with six races left in the season. But for Ferrari, it was yet another weekend on the back foot.

"We're not over-confident, we're diligent. We just want to keep hammering as hard as we can," Hamilton after Sunday's win, still sounding elated long after his victory. "If (Ferrari) have got an answer to that, we don't mind that, we like that battle. If they don't, we also don't mind that."

These are big "Ifs" for a Ferrari team lurching into crisis after a strong start - as Vettel won the first two races and four of the first 10. They were neck and neck heading into the summer, but Hamilton has won four of the past five races despite acknowledging his car is not as quick. "Ultimately, I think we're over-delivering," Hamilton said. "We've out-performed a car that's often slightly better - out-performed them as a team."

As a driver, too, Hamilton has the edge on Vettel - particularly in terms of composure under pressure. Both are four-time F1 champions and vying for a fifth win to move level with Argentine Juan Manuel Fangio and within two titles of F1 great Michael Schumacher's record. But Vettel, who crashed in the rain while leading the German GP in July - where victory would have given him the championship lead -makes mistakes Hamilton simply does not. During the Singapore GP, Vettel hit a wall during Friday practice and lost valuable track preparation time for qualifying. It triggered a set of baffling events and poor decisions unbefitting of such a proud team. Ferrari's mistakes this season have started to pile up, while Mercedes is making the right calls and Hamilton is making the most of it. Hamilton said Vettel's crash in practice was not Mercedes "lucking in," but more about the differing approaches of the rival teams. Now all the pressure is in the Ferrari garage. With six races left, starting in Russia in two weeks' time, Vettel has to find his best form and hope Hamilton slips up.