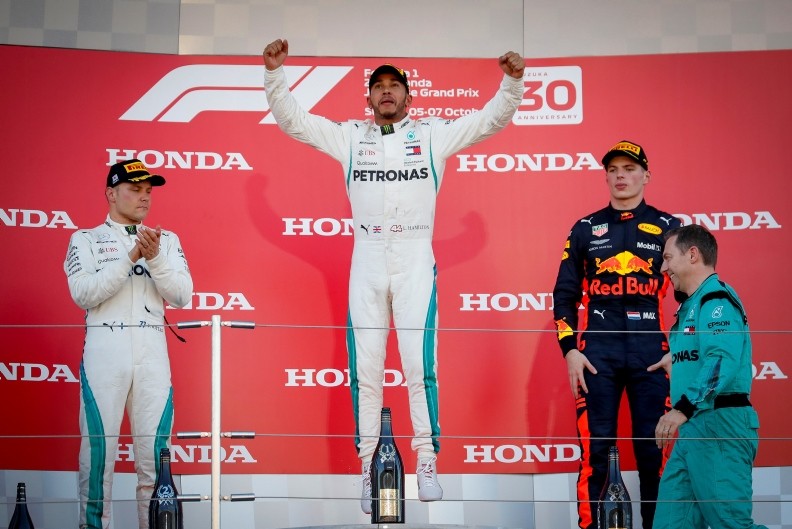 British driver Lewis Hamilton (C) of Mercedes AMG GP celebrates on the podium after winning the Japanese F1 GP, next to his runner up teammate Finnish Valtteri Bottas (L) and 3rd Dutch Max Verstappen at the Suzuka Circuit, Japan, Oct. 07, 2018. (EPA)
by Compiled from Wire Services
Oct 07, 2018 12:00 am

Lewis Hamilton stormed to victory at the Japanese Grand Prix on Sunday, claiming his fourth straight Formula One win and moving a step closer to a fifth world championship.

Starting from pole, the Mercedes driver was never seriously challenged and crossed the finish line 12.919 seconds ahead of teammate Valtteri Bottas. Red Bull's Max Verstappen was third, 14.295 seconds back.

"The whole weekend has been incredibly strong for the team," Hamilton said. "It's a great 1-2 for Mercedes and shows you the strength and depth of our team."

The victory was the 71st of his career, leaving him only 20 behind the record of seven times world champion Michael Schumacher.

Hamilton now has 331 points to Vettel's 264, while Mercedes lead Ferrari in the constructors' standings with 538 points to 460 for the Italians.

Hamilton has won six of the last seven races and now leads Sebastian Vettel by 67 points with four races left. He only needs to outscore Vettel by eight points at the next race in the United States to clinch a fifth world championship, which means he should win the next race at Austin and Vettel fails to finish second.

Vettel started eighth and quickly moved up to fourth place, overtaking both Toro Rosso cars that started ahead of him.

But the Ferrari driver attempted to pass Max Verstappen on the ninth lap and the two cars collided with the Ferrari spinning off into the runoff. The move dropped Vettel back to 18th place.

"I'm not the one who makes the rules," Verstappen said. "It was a similar situation to what happened in China with him. He could have been more careful."

Vettel worked his way back up to sixth but couldn't move higher than that.

It was an impressive day for Red Bull driver Daniel Ricciardo who started 15th but finished fourth ahead of Vettel's Ferrari teammate Kimi Raikkonen.

There was an early collision with Sauber driver Charles Leclerc hitting the rear tire of Kevin Magnussen resulting in a puncture and bringing out the safety car.

Verstappen was given a five second penalty for an incident with Raikkonen where he clashed with the Ferrari as he rejoined after running off at the chicane.

"Kimi chose the wrong line in the chicane, he could have also just waited for me to come back on the track," Verstappen said. "We touched a little bit but I really think it's ridiculous those five seconds."

"It was a bit late and obviously opportunistic," he said. "You know with Max, he's never going to give an inch and it's cost Sebastian dear today. That's probably the end of his championship."