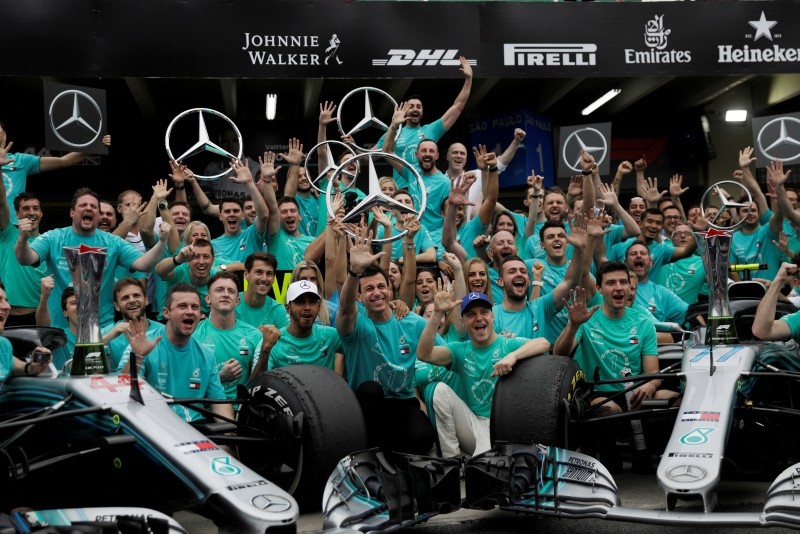 Ten years after securing his first Formula One title at Interlagos, five-time world champion Lewis Hamilton won the Brazilian Grand Prix on Sunday and helped his Mercedes team take the Formula One constructors' title for the fifth straight year.

The 20th race of the season in Formula 1 was run in Sao Paulo at the Autodromo Jose Carlos Pace, a motor racing track of 4,309 kilometers (2,677 miles) in length, comprising 71 laps.

It was Hamilton's 10th victory of the season, finishing 1.4 seconds ahead of Red Bull's Dutch driver Max Verstappen. Hamilton had already clinched his fifth drivers' title in Mexico Grand Prix, and he has now helped Mercedes equal Ferrari's record of five consecutive drivers' and constructors' championship doubles won by Ferrari with Michael Schumacher between 2000 and 2004. Hamilton's fifth title also leveled him with Ferrari legend Juan Manuel Fangio and Schumacher.

But it could have been a very different outcome for the British driver, who struggled with engine problems and medium tires as he waited for rain that never came.

Hamilton's second win in Sao Paulo was only possible after Force India's backmarker Frenchman Esteban Ocon clashed with race leader Verstappen on lap 44, causing both cars to spin. At the time, the Red Bull driver led Hamilton by five seconds.

"That (incident) put us back in contention," Hamilton said of his rival's setback. "Max is that go-getter guy and every now and again it bites you. But I am really, really proud here, I don't care about anybody else."

Off the track, the 21-year-old Dutchman later confronted — and pushed — former Formula 3 rival Ocon, who refused to apologize despite the stop-go punishment he was given during the race. The Force India driver finished 15th.

Verstappen managed to stay in the race after the incident and get closer to Hamilton in the final laps, but it wasn't enough for his second consecutive victory.

As on the track, neither 21-year-old Verstappen nor 22-year-old Ocon wanted to give way after the race. Verstappen was still angry in the post-race press conference, saying: "To get taken out like that, and to get a stupid response from his side as well, I was not happy about that.

"I hope I can't find him in the paddock now," Verstappen said of Ocon before he met the Force India driver after the race.

"I'm just trying to do my race and suddenly a backmarker is ... just taking a stupid risk, to dive in on the inside. What can I do about it? The penalty for me today is that I lost the victory. Hopefully in 15 years we can laugh about it."

On the altercation afterwards when Verstappen pushed Ocon in the chest, the Dutchman said: "We are all passionate about the sport. I mean, it would be odd if I had shaken his hand."

Ocon though maintained he did nothing wrong in attempting to overtake, and accused Verstappen of unprofessional behavior.

"The rules say you are allowed to unlap yourself if you're faster," he said.

"But what I'm really surprised is the behavior of Max coming into the scales. The FIA having to stop him being violent, pushing me and wanting to punch me. That is not professional."

Verstappen was given an unusual punishment for the pushes and insults he aimed at Ocon — he will have to perform two days of public service at the direction of motorsport governing body FIA within six months.

Ferrari's Finnish driver Kimi Raikkonen joined Hamilton and Verstappen on the podium. His German teammate Sebastian Vettel, who is second in the overall standings, placed sixth.

Hamilton celebrated his win and his team's fifth title with samba dancers on the podium, as Verstappen left still fuming.

"This is what everyone works for, we really pulled together as a unit this year," Hamilton said. His teammate Valtteri Bottas finished fifth.

Mercedes now has an insurmountable 620 points against Ferrari's 553.

It was Hamilton's 72nd victory in Formula One, a much celebrated one after all the problems he faced during the race.

"We were managing that in the last part of the race, we were losing some power," the British driver said.

Mercedes team principal Toto Wolff revealed afterwards that Hamilton's engine was on the point of failing, only for technicians to find a solution remotely.

In the first part of the race Hamilton kept the advantage he acquired by taking his 10th pole position of the season. Bottas overtook Vettel for second place, and for a moment it seemed Mercedes had the race in the bag already.

Verstappen, the winner of the Mexican GP two weeks ago, started in fifth and quickly overtook the two Ferraris, conquered Bottas on lap 10 and showed he would challenge Hamilton for the win.

After the world champion pitted on lap 19, it appeared Mercedes had made the wrong decision by giving Hamilton fresh tires before his rivals. Verstappen only stopped 16 laps later.

With 31 laps to go, Verstappen successfully challenged Hamilton and started building a lead before clashing with Ocon.

The British driver initially opened a lead of five seconds over Verstappen. But the Dutchman started climbing back on every lap, thanks to Hamilton's engine problems and medium tire deterioration.

The race at Interlagos marked the first time since 1970 there were no Brazilian drivers on the grid. Still, attendance was higher than last year's race when Felipe Massa bid farewell driving a Williams. Race organizers said around 150,000 fans attended over three days, 10,000 more than last year.

Massa, who lost the 2008 title to Hamilton and is now a TV pundit, was sorry for Verstappen, but impressed with Hamilton's luck on Sunday.

"We are both huge fans of Ayrton Senna, who nailed some lucky wins every now and then. Only true champions like Hamilton nail wins like this, when all seems lost," the Brazilian said.

The final race of the season is at Abu Dhabi on Nov. 25.

This season, Vettel was victorious in five races. Australian driver Daniel Ricciardo of Red Bull-TAG Heuer got two race wins so far, with Dutch Max Verstappen and Kimi Raikkonen each got one victory.

Season's driver and constructor standings are as follows: