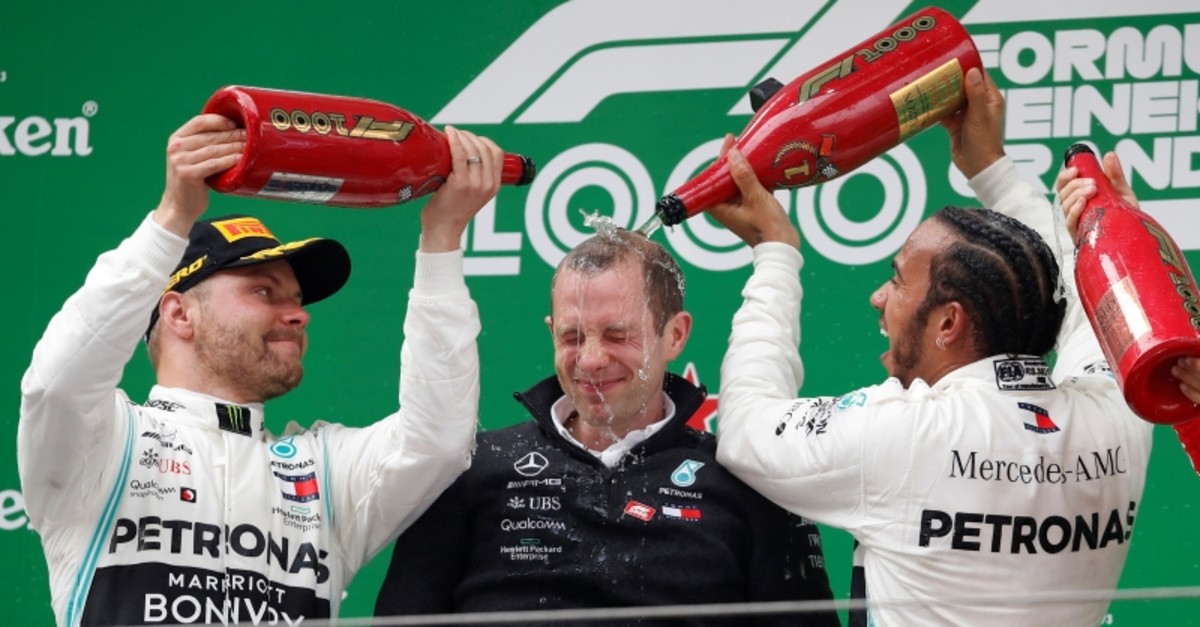 Lewis Hamilton of Mercedes won Sunday's Chinese Grand Prix, beating teammate and pole sitter Valtteri Bottas with a quicker start from his No. 2 spot on the grid. It was his sixth victory in the Shanghai race.

Hamilton, the five-time and defending champion, led for the entire race after the quick start for his 75th career victory. It also moved him into the lead in the overall standings after three races.

The next is in two weeks in Baku, Azerbaijan.

Sebastian Vettel of Ferrari was third ahead of Red Bull's Max Verstappen and Charles Leclerc of Ferrari.

"The start is really what made the difference," Hamilton said. "And after that it was kind of history."

Mercedes has won the first three races — two for Hamilton and one for Bottas — despite early hints this season that Ferrari had more flat-out speed.

"You can see it is still very close between us all," Hamilton said. "We have no idea how the next race is going to turn out."

Bottas acknowledged he was done in by his slow start, with Hamilton racing ahead out of the first turn and then running out front for the entire 56 laps.

'I think I lost it in the start, honestly," Bottas said. "It's a shame about the start. It's small details, but it's early days in the season. But we've done three perfect weekends so far."

The 21-year-old Leclerc of Monaco was clearly upset early in the race when his Ferrari team ordered him to let Vettel pass. Vettel was in fourth at the time and Leclerc was third.

"Let Sebastian by. Let Sebastian by," the team radio told Leclerc. He replied, clearly irritated: "But I'm pulling away" as he backed off and watched Vettel pass.

Ferrari team head Mattia Binotto told reporters earlier in the week that preference would be given to the four-time champion Vettel over Leclerc. At least early in the season.

"If there is any 50-50 situation where we need to take a decision, the advantage would have been given to Sebastian, simply because Sebastian has got most of the experience," Binotto said.

Despite benefiting from team orders, Vettel was not thrilled with his finishing position.

"I'm happy to be on the podium," he said. "It's tough. We tried to stick with them. But we just couldn't. They were too quick right from the start."

The race was billed as the 1,000th in Formula One history dating from the first race in 1950 at the Silverstone circuit in England. That was won on May 13 by Guiseppe Farina in an Alfa Romeo.