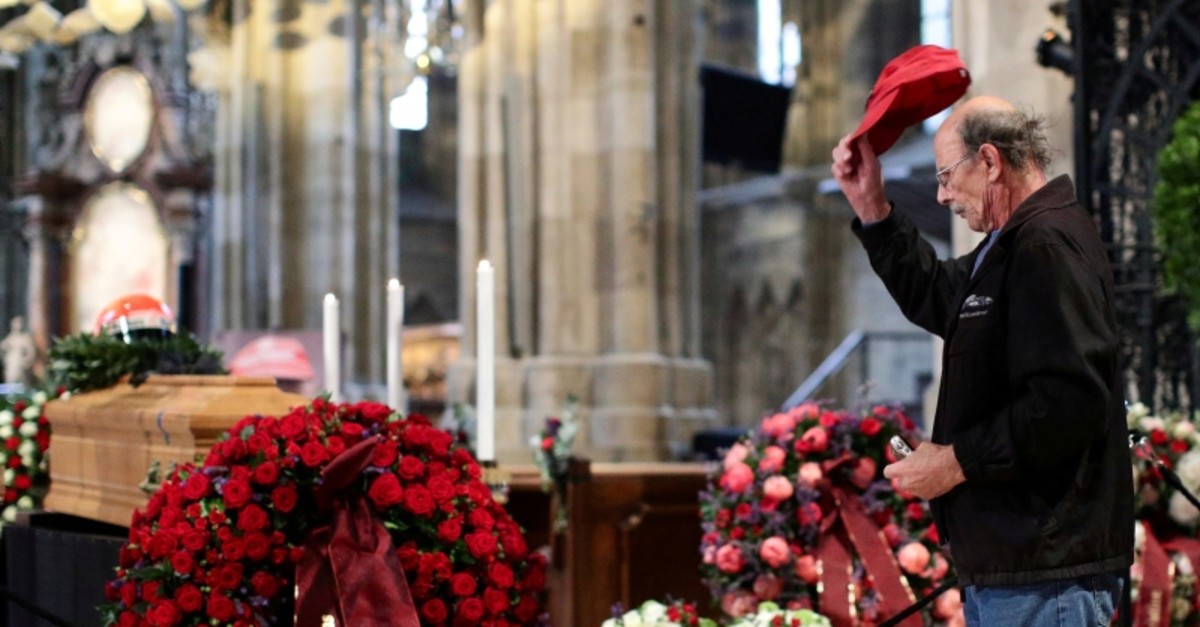 A mourner pays his respects at the coffin of Austrian motor racing great Niki Lauda during his funeral at St Stephen's cathedral in Vienna, Austria May 29, 2019. (Reuters Photo)
by Compiled from Wire Services May 29, 2019 5:48 pm

The memorial service for Austrian Formula One (F1) great Niki Lauda drew thousands of fans as well as celebrity friends to Vienna's main cathedral on Wednesday.

Lauda's widow Birgit along with two of his sons, Mathias and Lukas, put his helmet on top of the brown casket, which stood next to flower wreaths and a portrait of the Austrian sporting his signature cap hiding scars from the 1976 crash.

It is the first time a sports star has received such an honor at the Gothic Roman Catholic cathedral, a distinction previously accorded only to prominent personalities like the archbishop of Vienna, Cardinal Franz Koenig, and the former crown prince of the Austrian-Hungarian empire, Otto von Habsburg.

Austrian President Alexander Van der Bellen and Chancellor Sebastian Kurz also attended the service for Lauda, who is respected throughout Austria as a national hero.

Lauda's former McLaren teammate Prost was due to give a reading from the Old Testament at the private ceremony, the Vienna archdiocese said. Berger, Schwarzenegger, Van der Bellen and recently ousted Kurz - will give short speeches at the end of the service.

A video sting scandal that felled the leader of the far-right Freedom Party and blew up Kurz's coalition government drew some attention away from the national hero's death.

"Rather than grief I feel it's good that we had a person like him in Austria, someone who influenced motor racing so much and who could have been a role model for politicians," mourner Ernst Kollensteiner said.

Lauda died on May 20 at the age of 70, having failed to recover from an emergency lung transplant. He also underwent kidney transplants. One of the kidneys was donated by his last wife. Lauda married the former flight attendant in 2008 and they had twins, a boy and a girl, in 2009. Lauda also has three other sons from previous relationships.

Fans lined up for hundreds of meters in the rain to get a chance to see the coffin and attend the mass, the first time in Austria's history that such a memorial service was held for an athlete at St Stephen's.

Besides racing, Lauda's second passion was aviation. He founded and then sold several airlines with his latest, Laudamotion, going to Ryanair in 2018.

"He was Mr 120 percent," said Michael, a man who had worked for Lauda's now-defunct carrier Lauda Air. "He always got back on his feet."

Among the thousands of mourners, some sporting Ferrari caps, was Roland, a 41-year-old technician from Vienna. Waiting in line outside the cathedral, he told AFP that Lauda was "an example for Austria."

"Even though he faced very difficult circumstances, he never complained," he said.

Many had traveled from across the country and even further afield abroad to attend the funeral. Johann, a 70-year-old retiree from Burgenland state who used to work as a Lauda Air technician, described Lauda as a "strict but fair" employer.

Imre Varga, 63, came all the way from Hungary for the ceremony. She said she would watch Lauda on Austrian television, which people in the western part of her country had been "lucky" to receive in Communist times.

"During the Iron Curtain he was always a role model for us... He was unreachable, like a God, to us," she told AFP.

Lauda's motorsports fame rests not least on his comeback to the race track in 1976, only 42 days after a near-fatal fiery crash during the German Grand Prix at the Nürburgring circuit that left him with a disfigured face and permanent health problems. He managed to win two of his Formula One titles after the horrific crash.

Lauda won the F1 title in 1975 and 1977 with Ferrari and again in 1984 with McLaren, the only driver to do so with both teams. He retired in 1985 and served as a non-executive chairman of the Mercedes F1 team in recent years. Lauda was instrumental in bringing in Hamilton, sparking a run of success for the team.

The five-time world champion Briton won the Monaco Grand Prix Sunday, which he described as the "hardest race I think I've ever had."

"He was a super racer. He used his brain as a driver, unlike others," said a middle-aged motorsports fan who gave his last name as Quittan.

As an airline entrepreneur, Lauda also fought his way back from the crash of one of his aircraft that left 223 people dead in Thailand in 1991.

"As a businessman, he was tough as a nail, but he was also fair," said Sabine, who had worked as a flight attendant under Lauda and came to St Stephen's wearing a red cap to commemorate Lauda's signature headgear.

During the mass, songs, reportedly Lauda's favorites, including "Amazing Grace", "Fast Car" by Tracy Chapman and John Lennon's "Imagine" will be played.

A family-only burial was scheduled to take place after the requiem. It is not clear where Lauda will be laid to rest. The family reportedly has turned down an offer by the city of Vienna to receive a "grave of honour" in the city's vast Central Cemetery.

Lauda was dressed in his race suit for his final journey, according to St. Stephen's priest Toni Faber.