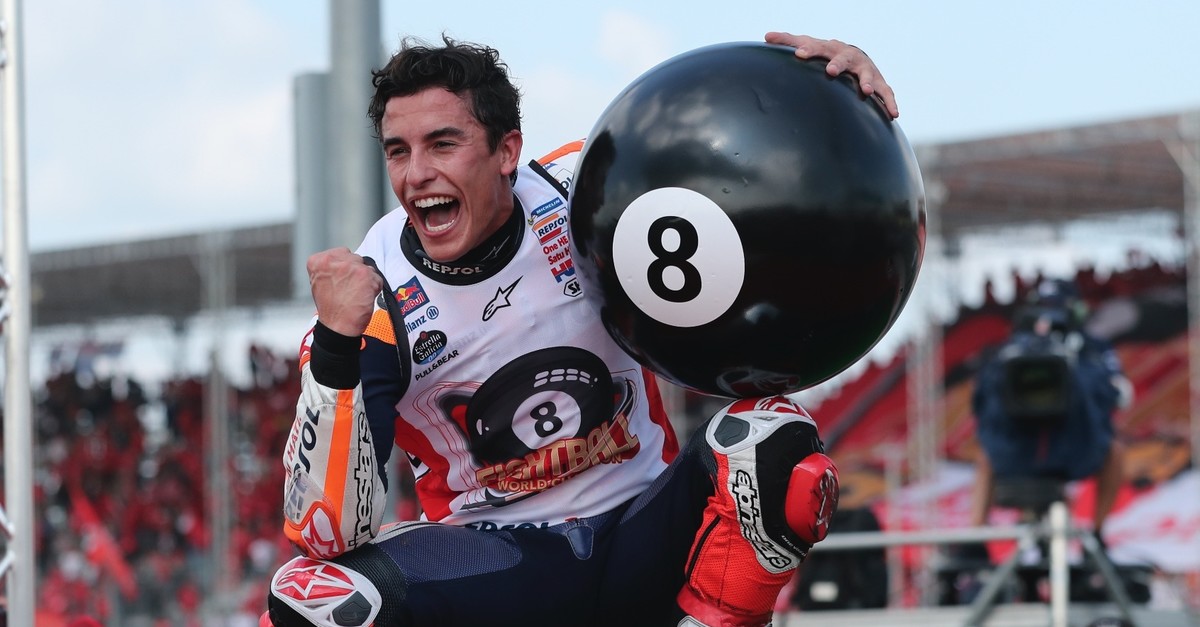 Spainu2019s rider Marc Marquez, captain of the Repsol Honda Team, celebrates with a giant 8 ball after winning Thailandu2019s MotoGP and his 8th Moto GP Championship at the Chang International Circuit in Buriram, Thailand, Oct. 6, 2019.
by Oct 07, 2019 12:29 am

Marc Marquez sealed his sixth MotoGP world title in Thailand yesterday after storming to victory in a heart-pounding final corner duel with Fabio Quartararo at the Chang International Circuit, but said it had not been an "easy" year as the front-runner. The win in Buriram gives him an insurmountable lead over closest rival Andrea Dovizioso with four races left in the season. Spain's Marquez finished in 39 mins and 36.22 secs just ahead of 20-year-old rookie Frenchman Quartararo with another Spaniard Maverick Vinales third. Marquez jumped up and down with joy after the victory and was handed a large eight-ball to signify the eight overall championships across all classes he has won.

He was hoisted atop the hands of supporters in celebration.

Starting from third on the grid, Honda's Marquez quickly slipped by Vinales and spent most of the race trying to overcome Quartararo (Petronas Yamaha) who led from pole position. Quartararo held the lead through 25 of the 26 laps but Marquez made his move on the final circuit, flying past the leader as the crowd screamed in delight. Marquez told reporters that it was now "time to enjoy it" after a high-pressure season with many competitors clamoring to topple the reigning champion. "Everybody is looking to beat you, it's not easy," a relieved-looking Marquez said.

He also described the 2019 season as his best ever in MotoGP.

With six premier class titles, the 26-year-old Honda superstar now pushes past Australian legend Mick Doohan. He trails only Italian great Valentino Rossi, who won the last of his seven championships in 2009, and Giacomo Agostini, whose record eight came in 1975.

But Quartararo is fast emerging as one of Marquez's toughest rivals, and the champion gave him his due. "I didn't expect this guy," he said of Quartararo, calling him "the outsider."

"He will be a very tough contender next year for the championship." Quartararo admitted that he was "really frustrated" at losing in such a close fight to the finish but recognized that it was a great result considering who he was up against.

"We tried until the last corner," he said.

Marquez went into the race with such a comfortable lead that he did not necessarily need to finish first to clinch the championship.

The stunning performance in Buriram, a rural town in northeastern Thailand that has banked its development on sports infrastructure, also came after Marquez crashed hard in practice on Friday and had to go to hospital. But the fierce competitor was declared fit to race and rebounded to finish third in qualifying.

Marquez won the inaugural race in Buriram last year in another last-corner thriller against Dovizioso. Clear skies prevailed after a downpour soaked the track on Saturday, delaying start times and creating slippery conditions for riders. Italy's Luca Marini won the Moto2 while Albert Arenas from Spain grabbed the Moto3 victory.