Hamilton considers F1 options after ending season on another high 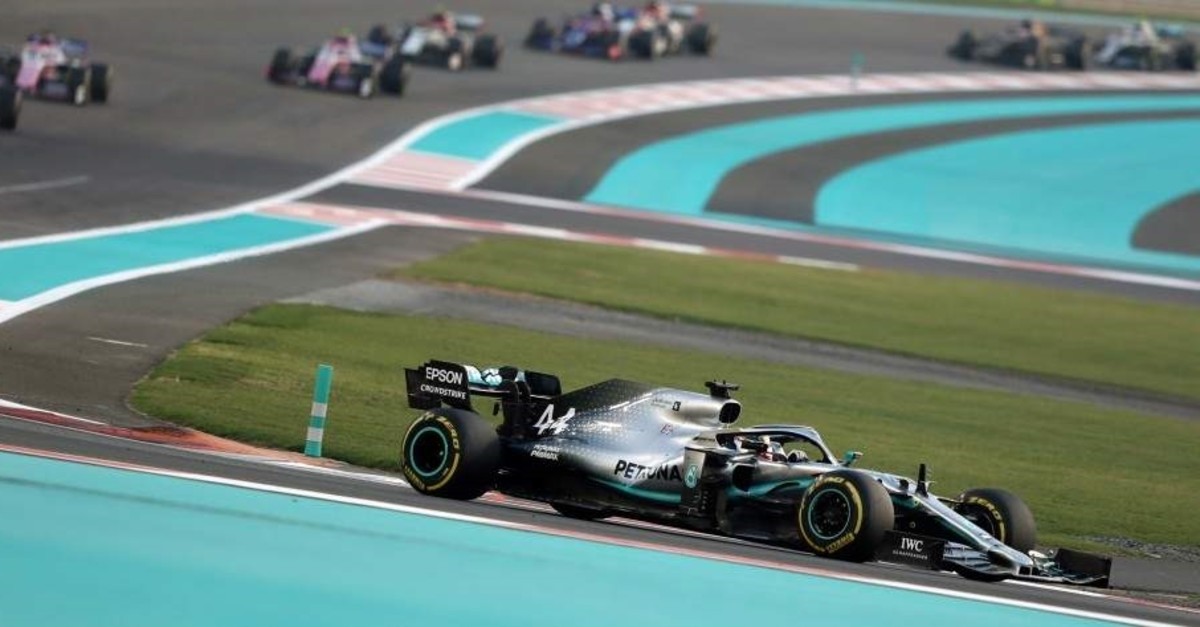 Lewis Hamilton (front), leads to win, during the Abu Dhabi Formula 1 Grand Prix 2019, Abu Dhabi, Dec. 1, 2019. (EPA Photo)
by Dec 02, 2019 2:47 pm
Lewis Hamilton is already looking forward to the 2020 season after he closed a triumphant Formula One year with a dominant pole-to-flag victory at the Abu Dhabi Grand Prix. What comes next though is now a matter of speculation as the 34-year-old Briton has been linked with Ferrari as he mulls the way he wants to close out a career that has already brought him six world championship titles.
After seven years at Mercedes, Hamilton has one more year on his contract and may want to consider a new challenge for his F1 twilight years as he homes in on records set by Michael Schumacher once thought unassailable. A decision could also depend on team principal Toto Wolff's future plans, he indicated. "I love where I am so it's definitely not a quick decision to do something else, but of course I think it's only smart and wise for me to sit and think of what I want ... if it is the last period or stage in my career," he said.
Hamilton's immediate thoughts though after securing his 11th win of the season, equalling his personal record, was for the 2020 season. "This has probably been the biggest year of growth for us as a team, so I hope that that will put us in a good position for a new challenge next year," he said.
"I've had some great races with (teammate) Valtteri (Bottas), Max (Verstappen) and Charles (Leclerc) this year and I anticipate that it will be even tougher competition in 2020. These guys will be working flat out to try and raise the bar, so I'm under no illusion that I will have to do the same this winter, but I wholeheartedly think I can. I feel fresh and just ready to keep going and I'm looking forward to another challenge next year."
Hamilton now has 84 career wins – seven short of Schumacher's record 91 and is a championship title away from equalling Schumacher's seven, while finishing the season with a record 413 points, ahead of Bottas (326) and Verstappen (278). "Hamilton's run from pole to the flag was as clinical a piece of execution as he exhibited all year," British daily The Guardian said. "He stood atop the podium alongside Max Verstappen in second and Charles Leclerc in third, a line-up of what is hoped to be the protagonists in the championship next year."
Mercedes again dominated, winning the constructors' title for a sixth consecutive season, and a year which began positively for Ferrari in pre-season testing was ultimately disappointing in a season riddled with mistakes and reliability problems. For Leclerc though, in his debut year at the team, it was a positive season to finish fourth in the standings, outscoring team-mate and nominal number one Sebastian Vettel, who was fifth. The driver status will change next season, with team principal Mattia Binotto saying Leclerc and Vettel will race as equals next year, the last for Vettel at Ferrari under his current deal. Red Bull meanwhile finished the season strongly and have high hopes for 2020.
"As a team we want to move forward next year and fight for the title," said Verstappen, who picked up three victories this season. "We need to push flat out to close the gap but looking at the last few races we have made a positive step. It's a great ending and now we just want to focus ahead and be even more competitive in 2020."
Other teams also had reason to be happy, particularly McLaren who ended several seasons in the doldrums by finishing fourth in the constructors' standings – their best since 2012 – with some good results for Carlos Sainz and Lando Norris. The season ended on a high note when Sainz, needing a point to secure sixth in the drivers' championship, managed to overtake Renault's Niko Hulkenberg on the last lap. "Bring on 2020!" team principal Andreas Seidl said.
Last Update: Dec 20, 2019 2:05 am
RELATED TOPICS