A night of Arabian tales 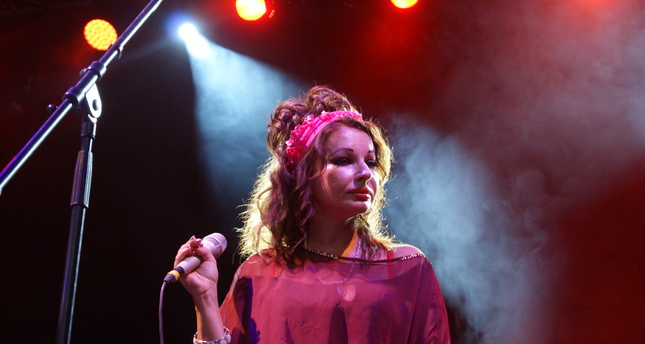 Combining Western and Eastern mysticism in Arabic melodies, Natacha Atlas uses her multicultural background to enchant audiences, as she is sure to do tonight in Istanbul

Natacha Atlas caught the eye of the music world in the 1990s. Undergoing a musical revolution in her artistic horizon with her latest two albums, "Ana Hina" (2007) and "Mounqaliba" (2010), she embraced more jazz-influences. She has worked with an eclectic group of musicians along with her own projects, including Peter Gabriel, Sinead O'Connor, the Indigo Girls, Jean-Michel Jarre, Nigel Kennedy and Transglobal Underground. Her characteristic voice has also been used in numerous films and video games, including "Kingdom of Heaven" (2005), "The Hulk" (2003), "Sex and the City 2" (2010), "Brick Lane" (2007) and "Sahara" (2005) just to name a few.

- You come from a multi-cultural background. How does it reflect in your music?

Natacha Atlas: I think it always shows in my music through the mix of styles I have employed over the years. I feel the music speaks for itself in this way.

- You seem like telling us the "One Thousand and One Nights" tales with your music. Are you the Scheherazade of music?

NA: (Laughing) Well, actually last year I composed the music for a contemporary ballet with my colleague Samy Bishai, and this ballet was based on the "One Thousand and One Nights." The choreographer used Scheherazade as his main influence, and he felt I represented her in some ways as well.

- Are the Arabic effects in your music a result of an orientalist vision?

NA: Yes, I would think it does because my desire is to make orientalist culture more acceptable to the West. n Do you think you have managed to achieve a synthesis of the East and West? NA: As I said before, my music describes that space in itself. In my opinion, I have achieved an East-West synthesis, and I am still discovering new ways to apply this synthesis.

- Which music awards have you won?

NA: I won the French Victoire del la Musique Music Award for the Best Female Artist in 2000 and a UK Emma Award later as well as an award from Italy two years ago.

- You have been in Turkey before. What is your impression of the Turkish audience?

NA: I have played in Turkey more than a few times over the last 10 years, and I have always found Turkish audiences open minded and modern and appreciative, especially as they value their oriental culture.

- You have worked with other musicians too, such as Sinead O'Connor and Peter Gabriel. Can you tell us about your experiences working with such world-renowned musicians?

NA: Well, I remember it being good, but I have worked with so many artists and collaborated on so many projects, it is difficult to remember each individually sometimes!

- Who else have you collaborated with so far?

- You have a large scale of interest. You have been in cinema with you voice. Which films have you worked in?

NA: "The Truth about Charlie," "The Hulk," "Kingdom of Heaven," "Sex And the City 2," "Sahara," "Brick Lane" and have just had my work/voice used on the trailers for the forthcoming films "Divergent" and "Lucy."

- What kind of collaboration did you have with the famous choreographer Angelin Preijocaj?

NA: I composed the music for his latest ballet "les nuits" with my colleague Samy Bishai.

- Are you familiar with Turkish musicians? With whom would you like to make music together in Turkey?

NA: I love Turkish musicians; they are very talented and creative. Ömer Faruk Tekbilek and many more. I very much appreciate their styles and technique.

- Will we hear the sound of the Arab Spring in your songs?

NA: Yes. One of my songs at the moment is called "Egypt - Rise To Freedom," and the last 2 albums have had this essence.