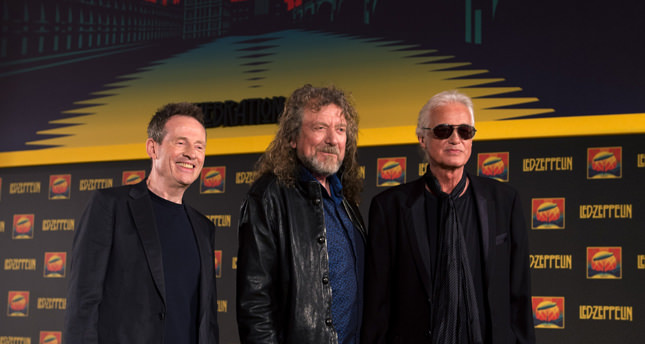 by Daily Sabah Apr 25, 2014 12:00 am
LONDON — Rock giants Led Zeppelin on Wednesday unveiled two previously unheard recordings ahead of the re-issue of the band's first three albums in June. The two tracks - an early version of their classic track "Whole Lotta Love" and a 1970 cover of blues standard "Keys to the Highway" - are among dozens of tracks which will be officially released along with the re-issued albums.

Guitarist Jimmy Page, 70, chose the material after painstakingly searching through the tracks, which were stored in the band's archive for decades. The band says the material will give fans a taste of its early studio sessions - the soon-to-be-released discs feature alternative versions of songs, works in progress and live performances. Singer Robert Plant said, "It was a particularly prolific time, where we were learning about each other's capabilities."

He said when listening to the re-discovered tracks now, he was sometimes shocked by his younger self. "My enthusiasm sometimes got in the way of finesse," he said in a BBC interview. "I listen to it and I go, 'Wow, why didn't I shut up a bit?' But it's of the time and it's of the enthusiasm and it's of the development of quite an amazing quartet of players." "Keys to the Highway/Trouble in Mind," which will appear on the Led Zeppelin III re-issue, was recorded in 1970 but never released.

The early version of "Whole Lotta Love" that will appear on the Led Zeppelin II compilation is significantly different from the final track. The original is missing the first chorus and middle section and new vocals and a slide guitar appear on the finished version. "You realize just how important all of those additional layers and the filigree work is," Page said. "There's all manner of bells and whistles to make it the song 'Whole Lotta Love' as we all know it." Led Zeppelin broke up in 1980, but interest in the band remains intense. The surviving members reunited seven years ago for a concert at London's O2 but Plant said the chances of the band performing live again were "zero."