A Protest Sound in Arabic Music 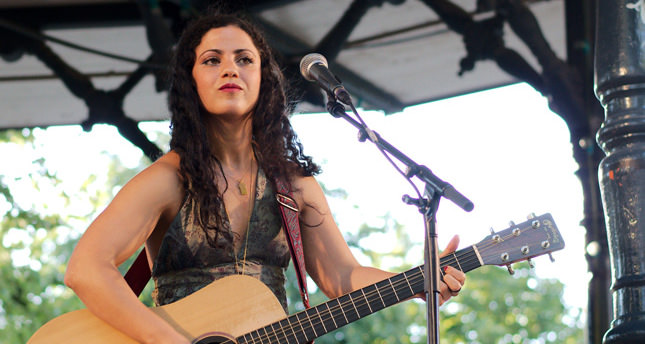 As the rebellious voice of Tunisia, Emel Mathlouthi's songs have become anthems for the Tunisian revolution and the 2011 Egyptian revolution. We caught up with her to discuss everything from music to being an artist in the Arab world

When the name Emel Mathlouthi is mentioned, we recall the rebellious voice of Tunisia. She is a wellknown performer and successful composer.

She represents a new generation of powerful female vocalists such as Joan Baez and Fairouz. Continuing her career with distinctive songs, Emel Mathlouthi fulfilled a longing to perform in front of audiences in Istanbul at CRR Concert Hall last month

Daily Sabah: What are the effects of Tunisian culture and heritage on your music?

DS: How did you start your music career?

EM: I started singing at home, doing covers of pop songs. I worked a lot on my voice and singing technique. At university I started a rock/metal band with friends and we started doing covers and performing.
We also created some original songs.

DS: How would you describe your music?

EM: It's a fusion between electronic music, North African backgrounds and cinematic soundscapes. I am very inspired by cinema, rock and classical music. The Arabic touch is natural in my way of singing and composing.

DS: You rearranged the songs of the Palestinian artist Marcel Khalife. What was the difference in your performance?

EM: The first thing is the use of the guitar, it wasn't easy to change the melodies with the oud into guitar chords but I was so into the depth of his interpretations that I created something interesting with my own emotions.

DS: Would you ever consider composing the poems of well-known national poet Mahmoud Darwish?

EM: I haven't composed anything yet from Mahmoud Darwish's poetry but I am interested [in dong so]. I was inspired by one of his poems for my song "Dhalem," which reads: "We have on this earth what makes life worth living."
I felt so much support from these words that I should believe in the power of words and poetry and music because tyrants fear them.

DS: How did you decide to write your own songs?

EM: I didn't decide. I was very happy singing covers and songs that I used to love very much for a bunch of time. One day I started writing about my best friend's illness, a depression that could characterize all Tunisians in the days of dictatorship... so the words suddenly had two meanings and from there was born my desire for writing protest lyrics. In general, writing songs is my favorite thing; it frees me and cures me. It saved me many times from the ugliness of people and the ugliness of societies, or the world.

DS: You are compared with musicians such as Joan Baez and Fairouz. What do you think about these comparisons?

EM: I think it's an honor because these singers gave me so much through their songs and emotions. I am, of course, most interested in being something more like just me but I think that being compared to such great artists shows how much people

DS: Do you know any Turkish musicians? Which ones do you like?

EM: I used to listen a lot to Kazım Koyuncu, Şevval Sam - I love them so much. I also love Gülay and İlkay Akkaya.

DS: How does it feel to be a female vocalist in the world of music?

EM: I don't really think a lot about that but for sure it's harder because you have to struggle especially to be respected and trusted.
But I don't really focus on that because I am 100 percent focused on being there for the people who believe in me and I love being a singer; it's my fate.

DS: What are the advantages and disadvantages of being an Arab artist in France?

EM: The best advantage is to have your own identity. I loved being different when I first came to France; people are curious about you. Of course I talk as a musician; it's different from any other field.

DS: What do you think about the Arab Spring?

EM: It's of course the greatest thing that ever happened to us, apart from the tragedy in Syria of course. In Tunisia, in Egypt, things are moving very fast. There is such energy coming from people; lots of civil and artistic movements. I hope all that will happen in all Arab and Muslim countries. The movement just started anyway - all tyrants be careful!

DS: Do you think that songs can ever bring peace to the world?

EM: I am not really focused on peace in and of itself; I care first about justice, equality, and freedom, which are also lacking and are necessary building blocks if the world is to truly achieve peace. I believe, of course, that songs can achieve a lot. They prove it time and again in the past and today more than ever.