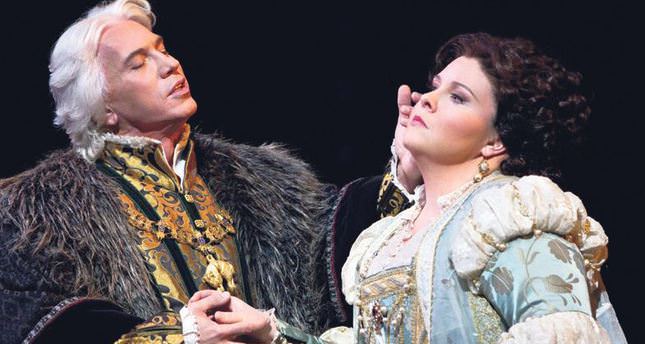 by Özkan Binol Jun 17, 2014 12:00 am
Dmitri Hvorostovsky has blown like a wind in the world of Opera for a long time. His name is mentioned with the legendary vocalists of opera because of his exceptional voice and extraordinary performance. Hvorostovsky, a gift from Russian opera to world stages,meets art lovers at a gala concert, which is the closing performance of the International Istanbul Opera Festival.

Daily Sabah: How were you first introduced to and became involved with opera?

Dmitri Hvorostovsky: I grew up in a family that always appreciated classic music. My father is a chemical engineer who has studied piano since he was a child and has continued to play piano till now. When he was in his 20s he began taking singing lessons. My mother has a very beautiful natural high soprano. I've listen to classical and opera music literally since I was born. After studying at music school as a pianist, I moved on and rebelled as a rock singer in my teens, but always had a special love and appreciation for opera. Soon I realized that my voice is way too rich and bright for rock and pop, and my father suggested I should go and study at choral music college, where I went and quickly developed an enormous passion for opera singing. At college I studied piano, conducting, choral singing and took singing lessons three to four times a week with Galina Astanina. After three years I auditioned for Ekaterina Yoffel's class at the Krasnoyarsk Academy of Arts. After studying for five years I graduated as an opera and chamber music singer. In the second year, I became the youngest soloist at the Krasnoyarsk State Opera Theater.

DS: Do you think that opera catches the musical expectations of today's music fans?

DH: Opera is the most combined genre of theater. It has almost every type of art in it. It certainly has all the topics of the modern theater. It invites and requires not just very sophisticated singing studies - a great deal of acting, stage actions, good looks and much more.
Very challenging.

DS: How do you prepare for a roll?

DH: I study the script, the piano score, the language and the history before and after I've started the role. The studying process should never stop.

Even singing the same piece all over again challenges you because you can never repeat or do the same again.

DS: Which composer's works could you perform tirelessly?

DH: I love singing Verdi. It has always been a dream to sing the great Verdian roles since I was a child!

DS: What is your favorite opera? Why?

DS: Who are your favorite opera singers? Why?

DH: Shaliapin, Caruso, Pavarotti, Corelli, Callas, Bastianini, Domingo, Arkhipova, Kaufman. I just love great singers, and I learn a lot from each and every one of them!

DS: You will be singing at the closing concert of the Istanbul Opera Festival. How is your repertoire for your audience in Istanbul?

DH: I'm sharing the stage with a great singer, Ana Maria Martinez, who has inspired me to choose a mostly Verdian repertoire.

DS: How would you evaluate the approach of opera fans in Istanbul to your concerts?

DH: Istanbul has always shown a very enthusiastic interest in opera and classical music since my first appearances in the middle 1990s. I look forward to facing a young and exciting audience along with my wonderful colleague Ana Maria!

DS: Do you know any Turkish composers? DH: Yes, Mustafa Itri (Dede Efendi) DS: Do you have a Turkish surprise again for the finale of your performance?