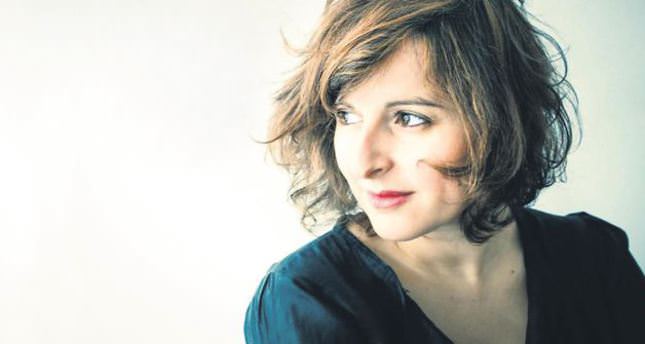 Melanie Dahan, considered the new pearl of French Jazz, is taking the stage tonight as part of Akbank Sanat Jazz Days, which brings together world-renowned talents and music fans throughout the month of June

French vocalist Melanie Dahan has been making inroads into the French jazz scene since her first album was cut in 2009. Reaching critical acclaim with her album "Latine" in 2011, she combines the best of French, Argentinean and Brazilian music.

Embarking on her international career with her debut album, "La Princesse et Les Croque-Notes" in 2009, Dahan has been described as "connecting old French chansons with modern songs, turning the music of Charles Aznavour, Jacques Brel and Leo Ferre into contemporary jazz standards" by the jazz music website, All About Jazz. Before taking the stage tonight at Akbank Sanat, Beyoğlu, Dahan was kind enough to discuss everything from how she got involved in jazz music to her latest album with Daily Sabah.

Dahan started playing jazz at a very early age. She said that it was her father's interest in jazz and bossa while growing up that got her involved in jazz very early on.

French chansons and pop music were also some of her other favorites but Dahan notes that after listening to Ella Fitzgerald's "Live in Berlin," she fell in love with jazz.

Dahan's parents were also very supportive even though she started singing around the age of 17, which by most would be considered an early age to take the stage. "They understood that I was deeply in love with stage and music," says Dahan. She, however, did not give up on her studies for music and finished a four-year university degree. She notes that music came very natural to her and with the loving support of her parents, she was able to follow up her passion. Dahan won few competitions and was also named "Young hopeful of French jazz vocal" at Les Couleurs du Jazz festival. Among all these awards and competitions, she still notes becoming a finalist in "Jazz a Juan," the annual jazz festival and competition held in the southern French town of Juan-les-Pins in 2005 as the most important one for her since it was her first award.

Dahan has toured many countries from Latin America to Japan. From her time touring, she says she's got a lot of moving memories from both small venues and some from huge theaters in certain big cities in Haiti, Ecuador, Bolivia, Colombia, Venezuela, Mexico, Japan and Russia.

Dahan recorded her latest album with five different jazz pianists, Baptiste Trotignon, Thomas Ehnco, Pierre de Bethmann, Manuel Rocheman and Franck Amsallem. A task which may otherwise be hard was a very delightful experience for Dahan who describes it as "fun and enriching."

Tonight, Dahan will be taking the stage with Giovanni Mirabassi, whom she had recorded two albums with, "La princesse et les croque-notes" in 2008 and "Latine" in 2011. Talking very highly of Mirabassi and his talent, Dahan describes their relationship as a very close friendship. "Giovanni and I met in 2004. I've grown by Giovanni's side because I met him at the beginning of my career.

In time, we have built a strong collaboration and became close friends. And I believe we both love playing together," says Dahan. It will be Dahan's first time on stage in Turkey but it is not her first time in Istanbul. She said that she visited and loved the city when she took a Mediterranean cruise a few years ago. "I am excited about knowing a new stage and meeting new audiences," says Dahan unable to hide her excitement. "Big thanks to Akbank Sanat for welcoming me from France and for promoting the development of art in Turkey."

Dahan will meet with young jazz music devotees at her master class, taking place today at 04:00 p.m. and will take the stage later on in the evening. So now all there is left to do is enjoy her light but expressive, engaging and beautiful vocals tonight.
Last Update: Jun 18, 2014 1:45 am
RELATED TOPICS