"We talk through our music" 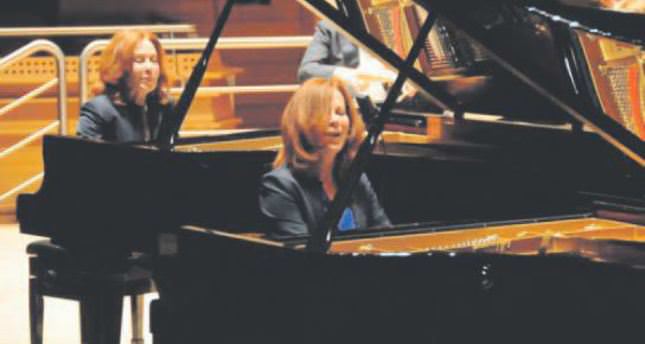 Güher and Süher Pekinel, classical pianist twins, are still going strong on the musical circuit while trying to share the luck and talent they have with the younger generation

Güher and Süher Pekinel sisters, who have worked with legendary names including Herbert Von Karaja and Zubin Mehta have caught the attention of international music community with their unique style. And now, they have surprised their fans with a DVD full of their concert videos.

Özkan Binol: Did you ever dream of such a successful career?

Süher Pekinel: The concept of career has never been in our vocabulary or our music.

On the contrary, we have objected to this concept whenever it was uttered. What we aimed throughout our lives was to perform our music in the best way possible, to go into the depths of it while still remaining pure; to convey our enthusiasm and all other emotions and above all, to share our emotions with others. Music cannot exist unless shared. Music evokes feelings in the audience and that is when you know that you have achieved a sound that unites the performer with the audience.

ÖB: Have you always worked together?

Güher Pekinel: No. We realized first we needed to find our own sound, own technique as well as identities. We needed to find our touch, because someone's touch is his quality, his color, his depth in life. In order to create your own interpretation of something you need to have a background, a foundation. If we had performed together since the early ages, we wouldn't have so much to give to each other.

SP: Although we worked with the same teachers from the same music schools, in order to build our own personalities, we started performing different songs. Our teachers also supported this in order for us to create our unique sound. We have been lucky in that sense.

ÖB: How did being educated in different music schools affect your life?

GP: We were taking lessons from Ferdi Statzer, the Austrian pianist and pedagogue at the conservatory we started attending at the age of five.

Afterwards, we went to the conservatory in Paris upon the recommendation of Mithan Fenma, who was the student of Corto in Ankara. After a year and a half, since most of our favorite composers - Bach, Mozart, and Beethoven - were from the German School, we decided to continue our education at Frankfurt Musikhochschule. We wanted to be able to read their minds, to dig into their souls, to understand them. And the best part of attending a conservatory in Germany was to be able to attend a college at the same time, which highly valued our musical education and reserved two grand pianos for us. We came first on the young musicians' competition before we graduated from college in Germany. Now, when we look back, it is hard to deny the variety different music schools added to our music.

When the Dei Zeit newspaper asked you "Do they have pianos in Turkey?" what was your reply?

GP: We said, "We talk through our music and we believe it is the best answer." This is what we believed in all along. The purity and the deepness of our music is enough to tell it all.

SP: They hadn't asked these kinds of questions until then. We grabbed the first price in four competitions in Germany and also at the UNESCO World Music Competition held in Paris on behalf of Germany. I think we proved that we are citizens of the world since we compose music that is the best synthesis of Turkish, German and French music school.

GP: That competition has an interesting story because each radio house in Germany picked up its own finalist. However, in order for us to attend the competition in Paris, we needed German passports. The then-president of Germany, Helmut Schmidt invited us over for dinner and the conductor of the Paris Opera was also dining with us. Mr. Schmidt's knowledge of music was incredible and he could also play the piano and the organ. The next day, he gave us German passports and we finally paid him back by winning the first place in that competition.

DS: How does it feel to work with some of the maestros of our time?

SP: We were lucky. We have worked with some of the best teachers and musicians who treat young musicians as their colleagues. First of all, Serkin, then Karajan, Bernstein and Mehta, all opened to doors for us. They have always trusted in us, thus motivated us. We were grateful for that.

DS: How was working with legendary conductor Herbet Von Karajan?

GP: Upon the recommendation of Deutsche Grammophon, Karajan invited us to the Salzburg Festival. When he talks about music, he usually cites famous writers and philosophers; he says very little but means a lot. Conversations with him usually enlighten people. Stravinski's double piano adaptation was his idea. Originally Stravinski composed this song for one piano to be played with four hands but Karajan suggested performing it with two pianos and two percussions. After performing it in our concerts in this manner, we realized that it was a brilliant idea. Deutsche Grammophon had planned recording Mozart's 2nd and 3rd piano concertos but due to his passing away, this project never came to life.

SP: Karajan cares about his looks; especially his look on stage. When he was preparing for a concert with us, he asked us what our style was and called Dior. After two days, the sketches of our stage costumes arrived. They were amazing; the harmony between black and white on stage was dazzling.

DS: Can you tell us more about your projects for young musicians?

GP: First one is the "Young Musicians on World Stages" project. Thanks to our sponsors, extremely talented young musicians get trained by some of the best musicians in Europe and most of them have become first, second or third in international competitions. Now they are attending conservatories in Vienna, Paris, Munich, Leipzig, Cologne, Zurich and Brussels.

SP: The other project is the "G&S Pekinel Music Department" that was opened at Turkish Education Foundation İnanç Türkeç Private High School (TEVİTÖL). The CEOs of the future are now introduced to the various cultures through music and broaden their horizons. International universities regard this as an educational credit.

DS: Is your signature on the poster of the 42nd Istanbul Music Festival?

SP: When we were living in Munich between 1970 and 1985 we used to create expressionist drawings under the influence of the trend we discovered thanks to Kandinsly. We used to visit all art galleries and attended various seminars and activities in Lenbachhaus Museum, where Blauer Reiter collection is. We were really impressed by Kandisnky's "On Spirituality in Art" (1911) and "Period Line Surface" (1926) writings.
This experience helped expand our visual and musical creativity. The recording for Teldec/ Warner of the Two Piano and Percussion sonata of Bartok was also recorded around this time. Our "Sonata" and "Harmony of Contrasts" paintings were also done in the same period.

GP: These paintings were sold in the exhibition held in aid for the World Wild Fund together with other renowned German artists in 1982 organized by Diners Club. Bülent Erkmen, who normally draws the festival posters made a collage of those two paintings by using the brochures for that exhibition to create this year's festival poster. We had no idea and it was a big and pleasing surprise for us.
Last Update: Jun 27, 2014 1:30 am
RELATED TOPICS